Driving in my car...put on the radio...
As I was cruising home two nights ago (6.5 hours on the road - I was at a conference up in Midland), I saw these large, blooming plants along the side of the road...MY road. 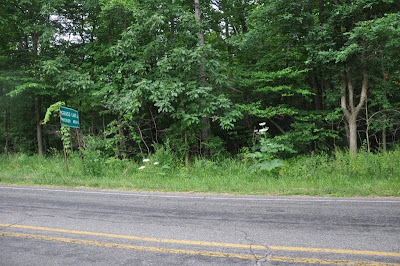 I did a double take. 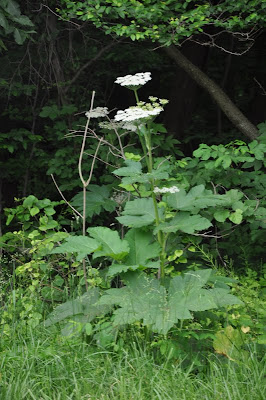 I asked Gary yesterday:  is giant hogweed in Michigan?  He said yes, but not too prevalently, yet.  Well, I said, I think I saw some yesterday along my road.

So this morning I stopped and took photos.  As you can see from the first image, it is large; the only thing I could think to use for scale was the road sign (I didn't want to go near it).  Y'see, giant hogweed, another invasive species, is also highly dangerous.  Any contact with this plant can cause severe "contact dermatitis" that is exacerbated by exposure to light.

Have you ever had a rash from poison ivy?  Well, this is many many times worse.   Here, I'll show you (I swiped these off the internet): 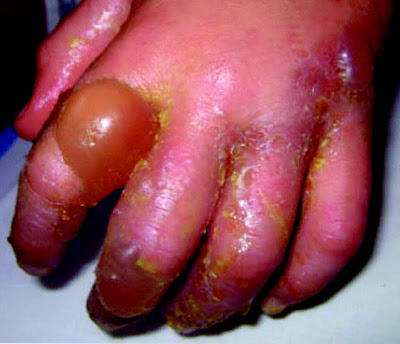 This plant has been used to poison (kill) people.  It is a baaaad plant.  If you see giant hogweed, do NOT approach it (unless you are heavily garbed in clothes you are willing to throw out).

It can, however, be controlled, especially when the infestation isn't too large.  Here is a notice on eradication put out by the NYS DEC.

Still, I wasn't 100% sure that this was giant hogweed.  After all, I do have a tendency to rush headfirst to conclusions only to bash into a wall of misidentification.  So, I continued to look, for I know there are some look-alikes for this horrid plant.

Sure enough, I was right - I was wrong!  The leaves were the key for correct identification of this plant.  It turns out that what I found is cow parsnip (which I erroneously thought had yellow flowers).  Cow parsnip (a native plant) can also grow to monumental heights (up to ten feet), and also has enormous leaves, but the leaves are more like a maple leaf than, oh, say a fern leaf.  They are lobed, but not deeply lobed.  Take a look at the bottom leaf in the second photo.  Now compare it to the giant hogweed leaf below. 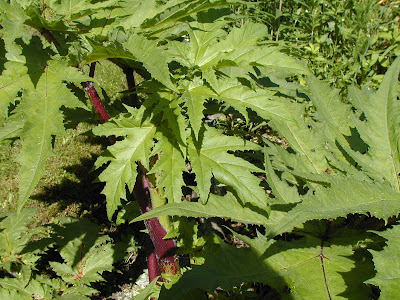 These two plants are related, and although cow parsnip is not as dangerous as giant hogweed, it, too, contains a phototoxin that can cause some pretty bad contact dermatitis (burns) for those who choose to tangle with it.  Like poison ivy, though, it seems that not everyone is sensitive to the chemical, so it is possible that one can contact the plant without any adverse reactions.  But why take the chance?

I'm just glad to know that it isn't the highly invasive giant hogweed growing along the sides of my road.  Whew!  Dodged a bullet there.
Posted by Ellen Rathbone at 11:46 AM

Email ThisBlogThis!Share to TwitterShare to FacebookShare to Pinterest
Labels: invasives