Sunday morning the weatherman told us that it would be mostly sunny, in the high 60s, low 70s, with a breeze of 5 to 15 mph.  It sounded like good weather for paddling.  GREAT, the Grand River Environmental Action Team, was sponsoring a paddle on Stoney Lake, a private lake owned by the YMCA Camp Storer.  I've heard a lot about this camp throughout my career, so I was especially eager to see the place, which, it turns out, is only a few very short miles from where I live!
Well, we drove up to the lake and unloaded our boats, only to stare doubtfully at the grey, overcast sky.  Where was the sun? 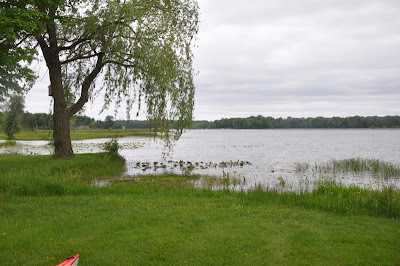 In fact, the longer we stood there, the cooler it seemed to become.  The temperature was actually dropping!  Still, this didn't deter the crowd that gathered for this special paddling adventure. 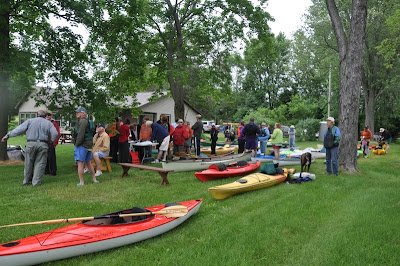 Kenny, GREAT's current president, asked Gary, our naturalist at work, if he would "lead" this trip - the idea being that many paddlers would actually like to know what they are paddling past.  Gary is a phenomenal birder, so that was him primary focus on this trip:  the birds that nest and hangout in a fen and relatively secluded lake.  By 1:00 we were launching. 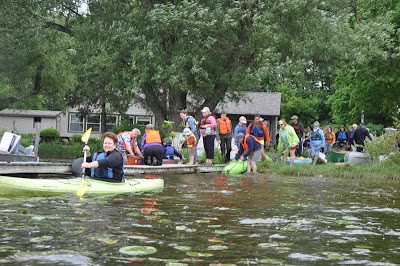 Now, I like birds as much as the next guy, but I find them notoriously difficult to spot, which is why I focus more on plants - they aren't about to move when you sneak up on them.

As expected, we had some of the usual cast of characters, like fragrant white water lily, 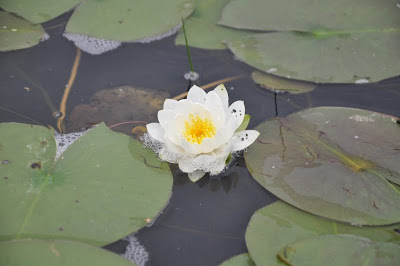 Update:  from US Forest Service website, I found the following about the white fragrant water lily:
One flower's pollination strategy tells a tale of the macabre that even Edgar Allen Poe would enjoy. Water lilies (Nymphaea odorata) have a broad open flower with numerous petals. On the first day that the flower opens, the stamens do not release their pollen. The female part of the flower is covered by a pool of fluid produced by the flower. When a potential pollinator visits the flower, the arrangement of the petals causes the insect to fall into the pool of fluid where it dies. Any pollen grains on the pollinator's body from a previous visit to a water lily where the stamens were releasing pollen, gently settles to the bottom of the pool of fluid and comes in contact with the female part of the flower completing the pollination process. The following day, the flower produces no fluid, the stamens release their pollen, and visiting pollinators, covered in pollen emerge from the flower to begin the deadly cycle once more. 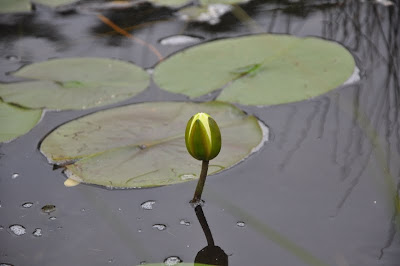 and spatterdock.  These plants must be pollinated by flies, for whenever I find them, they are playing host to a large number of these insects.

Update:  spatterdock, aka yellow pond lily, is pollinated, possibly, by adult leaf beetles.  However, the plant produces a brandy-like odor that attracts many insects.  Halictid bees and Syrphid flies are frequent visitors, the adults coming in to feed on the flower's pollen.  The part of the flower that we think are petals are actually sepals; the real petals are within the cup formed by the sepals and they are rather inconspicuous.  Historically, the yellow pond lily met many needs of the people who knew it.  The roots were collected for food, as were the seeds, which could be ground into flour or dried and popped like popcorn.  The leaves are styptic - they stop the flow of blood.  The roots were made into a poultice that was applied to cuts and wounds, and to reduce swelling.  The leaves and roots were both used for dyes, thanks to their high tannin content.  Overall, this is a rather versatile and useful plant. 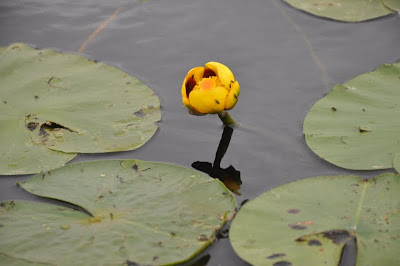 But the flies weren't the only insects enjoying the plants - here we have a damselfly who has recently emerged from its juvenile skin (the whitish one lower on the flowerhead).  The empty case is called an exuvia. 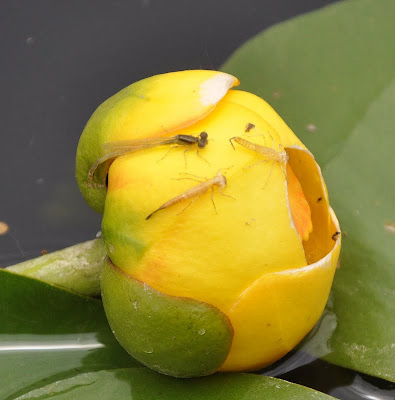 Did you catch the word "fen" above?  For those who don't know what a fen is, it is a type of wetland, much like a bog, but with alkaline waters (bogs are acidic).  This part of Michigan is riddled with fens...or at least it was historically.  Many fens were filled in for agriculture or development, but today those with vision are working to restore these important habitats.

The photo below is of the fen on Stoney Lake.  Up until a few short years ago, this fen was full of buckthorn, a highly invasive species.  Three years of controlled burns and many many hours of cutting and poisoning invasive species have restored this wetland to its former glory.  Many of the native plants, whose seeds were still viable in the soil, have made a remarkable comeback.  Marsh wrens have returned to the lake, and hope springs eternal that sedge wrens will follow suit. 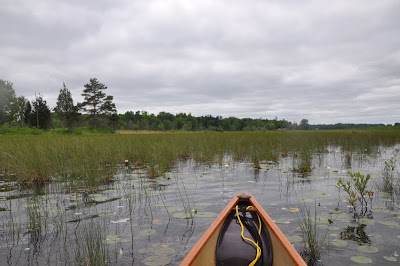 Red-winged blackbirds were the most common birds we saw here. 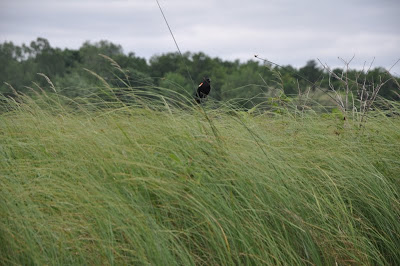 Which is fine, because we also found this lovely redwing's nest: 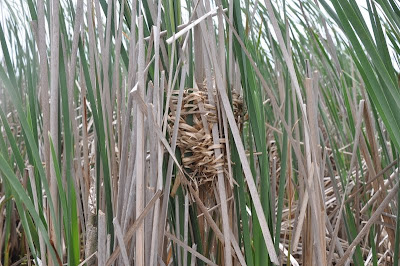 Just check out the workmanship on this nest - it looks like a master weaver made it (and perhaps one did). 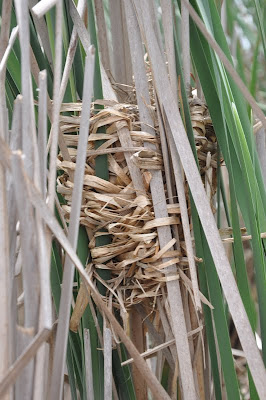 I thought for sure this had to be a crane or swan nest, but it is a muskrat platform!  There were quite a number of this all along the water's edge, tucked into the cattails.  Muskrats like cattails, which provide food, shelter and materials for making platforms on which they can eat at their leisure. 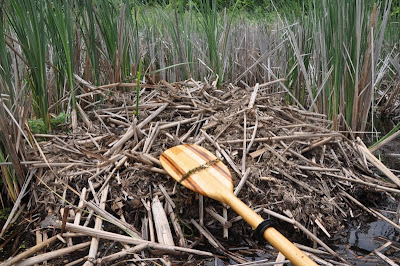 Here we have a marsh wren nest.  Gary told me that the males make several of these ball-like nests in hopes that a female will find one of them to be her dream home.  So, when you find one, if you look around, you are bound to find three or four more. 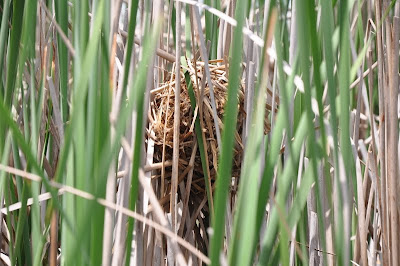 This was an interesting plant.  Gary said it was called chukka (?).  Whatever it is, it is very coarse.  It feels like it would be ideal for scouring pots and pans.  Apparently it wreaks havoc on motorboat propellers. 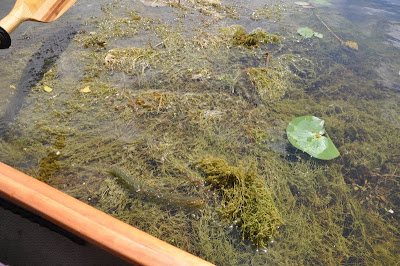 There were two families of mute swans on the lake.  Mute swans are non-native birds, so lovely as they are, they are, well, invasive.  They have a tendency to be prolific nesters, and rather aggressive, too.  They have taken over where our native swans used to nest.  Still, a swan remains an impressive bird.  Gary warned me, however, that the male can be quite protective of the family. 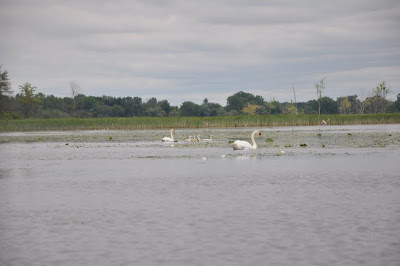 So, while the male was distracted (that's him with his head underwater), 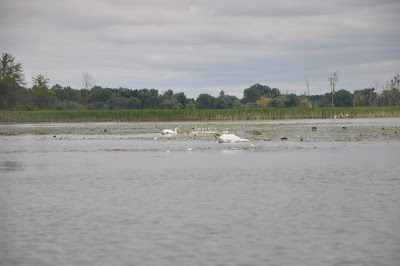 I paddled up towards the rest of the family, although at an angle so I wouldn't seem too threatening. 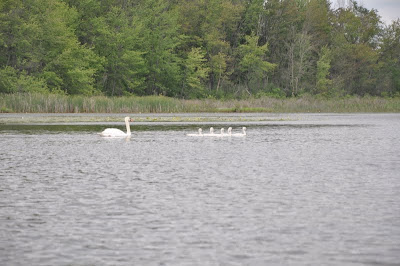 Got a nice series of shots of Junior stretching his wings. 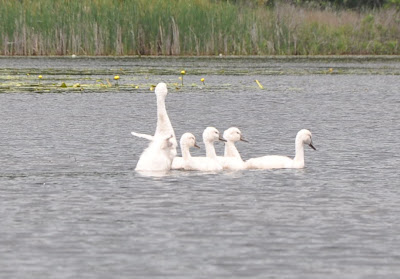 Gary heard a least bittern out in the tall grasses, but the only other birds I saw and heard were these two sandhill cranes.  They blended in very well with their background. 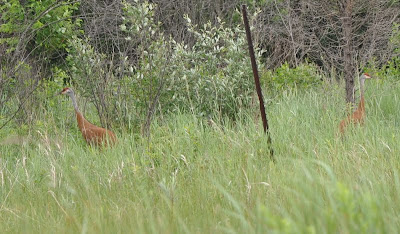 I was happy to see these bladderworts.  There's just something about carnivorous plants that's intriguing. 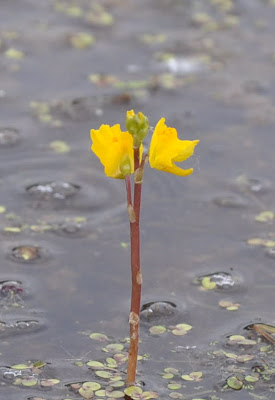 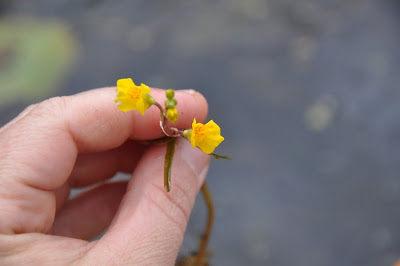 The day wrapped up around 3:30.  The sun came and went, and I was grateful for the windbreaker Gary loaned me.  That's the last time I believe the weatherman! 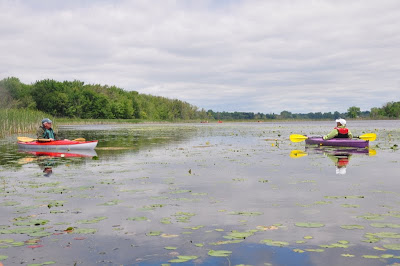 Everyone went home satisfied with the tour they had of this special little lake.  I'm glad we had the opportunity to see it.  Many thanks to Bill and Irene for inviting us to paddle here!
Posted by Ellen Rathbone at 6:44 PM