Shortly after I rolled in to work yesterday, Gary asked if I'd like to accompany him on a jaunt over to Lime Lake, a local park that is part of the Falling Waters Trail.  He'd taken the Tuesday Morning Group out there and had see so many terrific things, but had left his camera at work, so he wanted to go back and get photos of some of the nests they found.  How could I refuse?  So, of course, I said "Sure!"
Here we are at Lime Lake, which is actually two smallish lakes, sort of man-made.  On the far side here there is a fen, so there was definitely water in the area prior to man's involvement.  And why did man get involved? 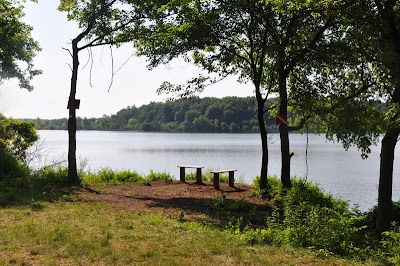 Here you can see some of the remnants below the water's surface of the once rather prolific marl mining operation that was here. 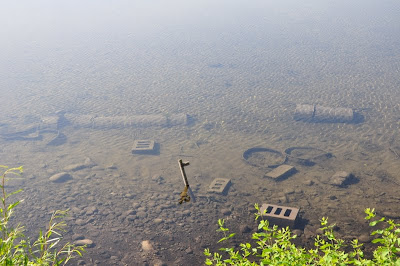 Only a few feet from the shoreline the lake's bottom drops dramatically to a depth of 30 feet or so.  This was the mine pit. 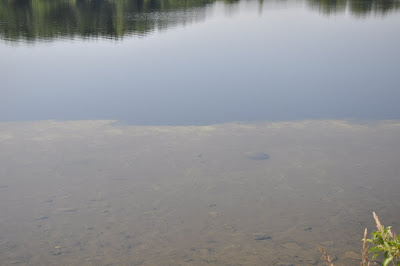 Marl, which is a limestone, was dug up here for use on the agricultural fields all around.  The soils in this part of Michigan are no the best in the world, as I've noted before (especially on my gardening blog).  Some parts are acidic, others are alkaline.  The marl, which is a crumbly substance, was used to help balance the pH and make the soils a bit more fertile. The sign below tells all about it. 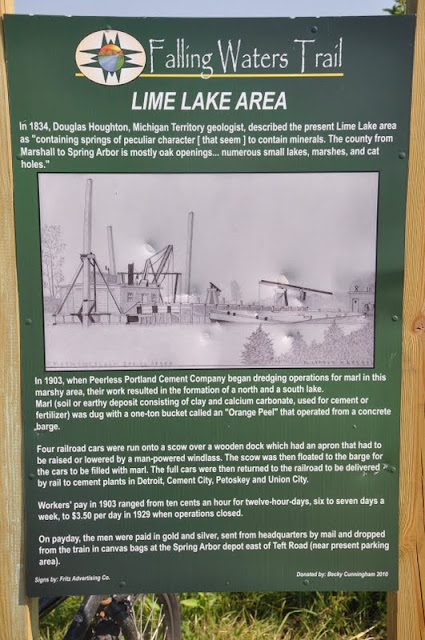 But, our primary reason for this trip was the nest below.  It's the nest of a warbling vireo, a small grey bird with an oriole-like song.  Sort of.  Gary described the song as "squeeze me, squeeze me, squeeze me 'til I squirt."  We did see the bird, and we definitely heard one or two, but no one was at the nest when we stopped by.  If it weren't for Gary's eagle eyes when it comes to all things bird, I don't think anyone would have seen this nest - it is very well hidden. (It is in the center of the photo.) 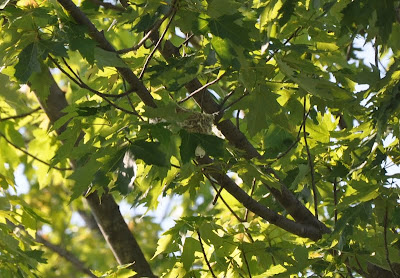 I was happy to see this familiar-looking plant:  sumac.  To the untrained eye, this looks like it could be staghorn sumac, the species I am familiar with from back home.  However, it has no fuzzy coverings on its stems, and the leaves are very smooth.  This is smooth sumac, another native, and one that is quite prolific in these parts.  I may, in fact, already have some on my property.  It is certainly a species to cultivate for a) it is native and b) it produces fruits that are important to our native birds.  I need to acquire some more. 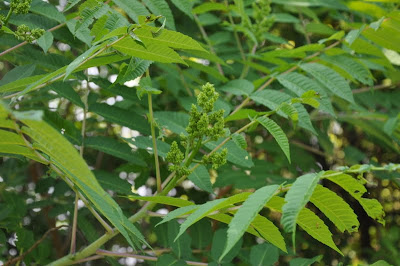 Now, this fellow was a surprise.  It was zipping along the paved path in quite a hurry.  It's rather cylindrical shape and striking coloring made me want to photograph it, but I had to slow it down first.  Voila!  My foot made a great barrier.  I snapped a couple shots and off it dashed again.  Gary thought it looked rather cockroachish.  Hm.  The only cockroaches I've ever seen were the Madagascan hissing cockroaches we had at the zoo where I worked.  I've written about cockroaches, I have a great book about cockroaches, but I've never lived where cockroaches lived.  I sent this image off to BugGuide, and within minutes I had an answer:  it is definitely a cockroach, but it's been forwarded to the appropriate experts for species ID.  Will keep you posted.  On the one hand, it's rather exciting to add a new critter to my life list of things I've seen, but on the other hand, shudder, cockroaches!  I'm not sure how I feel living where these guys exist. 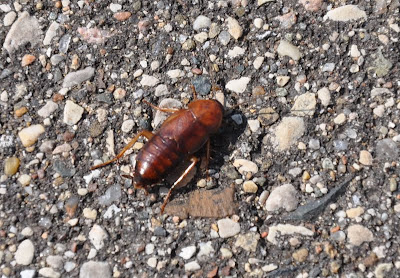 There are many (and I do mean MANY) bluebird nest boxes along the trail, quite a number of which are there because of Gary's involvement with the creation of this trail.  We didn't see any bluebirds, but the boxes were all in use.  This one was stuffed full of plant material - house sparrows.  Invasive species - Gary removed the nest. 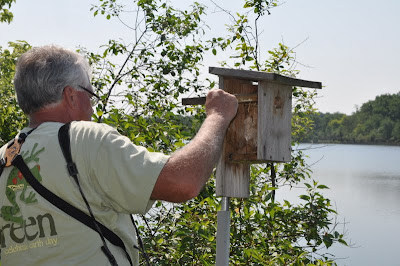 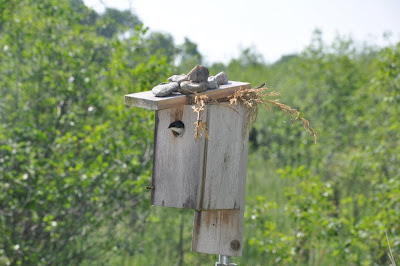 and kestrel boxes, which are built for rather larger birds. 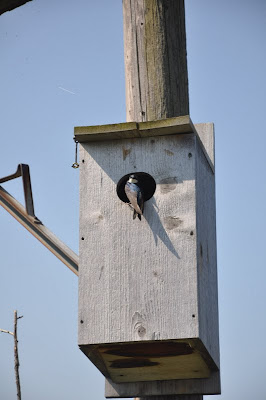 The general rule of thumb when putting up bluebird boxes is to pair them.  This is because tree swallows are rather territorial and will evict bluebirds in order to have the nest box.  If the box is paired with another, the theory is that they swallows will keep other swallows from nesting next door, allowing the bluebirds to move in in peace.  Well, here are two bluebird boxes and a kestrel box, all in a row, and each one had a tree swallow family in residence.  Many of the swallows had fledglings that had either a) just been kicked out of the house and the parents were now rebuilding for a second brood, or b) were in the process of coaxing the kids out for their first flights. 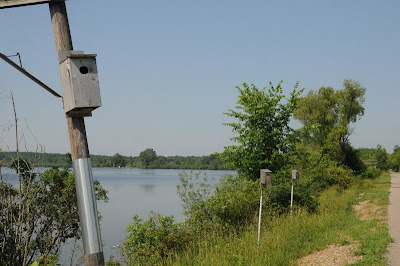 This turtle nest didn't make it.  Raccoons, skunks, foxes...they are all known to dig up turtle nests to have a fresh egg meal.  These eggs seemed a bit on the smallish side, so the nest probably wasn't the usual snapping turtle nest.  It could be a painted turtle's nest.  When Gary and the group were out here on Tuesday, they saw a large softshelled turtle (think pancake with legs, tail and head) laying eggs.  This is why one should always bring a camera along. 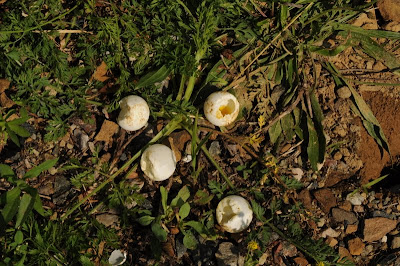 There were plenty of insects flying around, including this little European skipper - yes, a non-native butterfly.  It was "accidentally" turned loose 101 years ago in Canada, and is now taking over North America.  Skippers in general have a rapid and rather erratic flight, and they usually fly close to the ground.  This makes sneaking up on them a bit of a challenge. 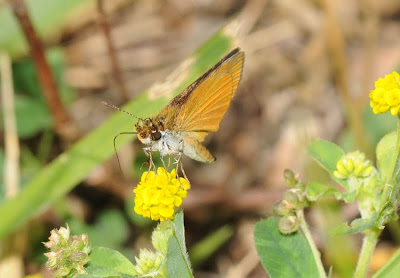 And speaking of sneaking up on insects, I had some fun trying to sneak up on this calico pennant dragonfly.  It seems that every time I about had it lined up for a shot, it took off (I swear it was thumbing its nose at me).  Eventually, however, it perched for a few seconds allowing me to get a few nice images.  This is the male of the species.  The female would look similar in pattern, but instead of red and black, she would be yellow and black.  This seems to be a rather common trend in dragonflies. 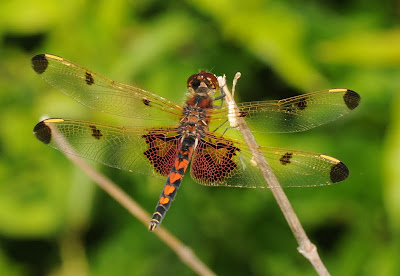 We found a small patch of Deptford pinks in bloom.  It's a pretty little plant, native to Europe, and although it is found rather extensively here in the US, it doesn't seem to be a problematic plant.  Although, Gary did point out that even though it isn't really "invasive," he wonders what native plant would be blooming here instead if this plant hadn't come over.  It's an interesting question. 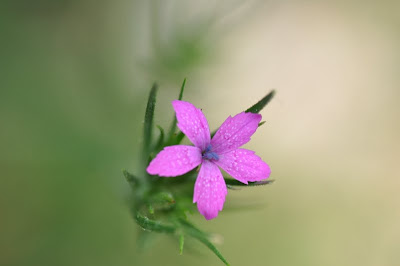 While not all non-native species are problematic, too many wreak havoc within our native ecosystems.  All along the trail ash trees were marked for cutting.  Some were dead, some still had leaves, but all were impacted by the emerald ash borer.  Back in New York, this highly destructive insect is only starting to get a hold on the landscape, but here in Michigan it's work is already done.  There are no (or nearly no) mature ash trees left.  The adult beetle bores into the trees, lays eggs and leaves.  The larvae eat the tree, and when they emerge, they leave these rather large holes behind (see below).  The end result:  the tree dies.  It seems that, like the American beech, young trees (saplings) are unaffected, but as long as this insect remains here, we will not have any more mature ashes in this country. 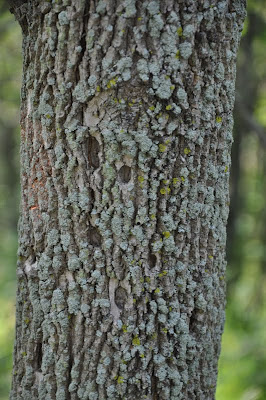 Some places are taking action by cutting down all their ashes before the beetle arrives:  if there is no food, the insects will die off (that's the theory).  They did the same thing with chestnuts back in the day.  It's a nice idea, but I don't know how effective it is in the long run.

I suppose some folks may think that we naturalists harp a bit too much on alien invaders/non-native species.  The truth of the matter, however, is that with this highly mobile global world today, insects, plants, fungi, etc. have easy access to new frontiers.  When they arrive on foreign shores, if they are able to find food or a host, then they go to town unchecked, for their natural predators/control agents stayed back home.  There's nothing to slow 'em down.  People who are not in touch with the outdoors may think this is a non-issue - there are plenty of other plants (etc.) around, so what difference does it make if one or two species disappear.  The things is, it's not just one or two species.

Remember the food web?  We all learned about it when we were kids.  Everything is attached to everything else in nature.  If you wipe out all of a particular native plant, for example, what happens to the insects that depended on that plant for a food source?  If those insects now die out, what happens to the birds who depended on those insects to get them through the first days of spring, for even seed-eating birds rely on insects for their young?  Like ripples on a pond, loss of native species have far-reaching impacts that we many not realize until it is too late.

This is why we naturalists go on and on about eradicating non-native vegetation and replanting areas with the native plants.  We don't want to lose all those things that make North America, Michigan, New York, Alabama, Oregon special.