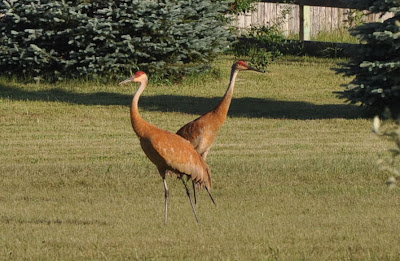 Yesterday morning Toby and I passed this pair of cranes down the road from our house.  When Toby started to bark, they took objection.   The one crane started to bob its head, open its wings with a powerful whump, and lift both feet off the ground - jumping in place, suspended by its wings.  It was telling us that it was big and powerful and capable of defending itself should we decide to come any closer.
Of course, I didn't have my camera.
This morning I took the camera and the cranes were back.  But Toby decided to control his barking, so they did not feel threatened.  No dancing today.
Still, there is nothing quite like the prehistoric calls of cranes.
I've often held turkeys up as the example that dinosaurs still roam this planet.  If you don't believe it, just watch a turkey as it walks along a field.  Better yet, watch a whole flock of 'em.  Then recall the scene from Jurassic Park where a herd of dinosaurs goes galloping past the camera.  You will easily see the similarities.
But the calls made by these cranes...there's just something about them that echoes through time.  Close your eyes and listen to this video.  Then tell me if you can picture pterodactyls.
Posted by Ellen Rathbone at 11:06 AM