During our evening stroll last night, in the 90+ degree weather (bleh), Toby and I came across this humungous furry black caterpillar lumbering down the middle of the road.  Well, both of us being the curious beings that we are, we had to check it out.  Toby gave it a good sniffing, and I gathered it up in a plantain leaf and carried it home to a) photograph (see what happens when you don't bring your camera on walks?), and b) ID. 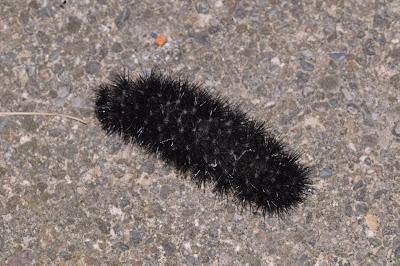 Of course, it promptly curled up into a prickly ball, warding off all dangers, namely Toby and me.  I later discovered that in addition to the bristles lending it protection from potential predators, scientists believe this animal also has some chemical protection, as evidenced by the bold coloring of both the caterpillar - see below - and the adult moth - more on this in a moment. 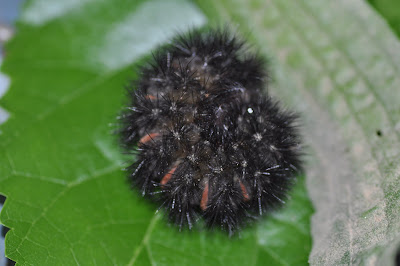 Now, in both these images, where the caterpillar had coiled up and simply refused to open, you can see the rather attractive reddish-brown bands on its skin, between the rows of black bristles.  For those who like such technical things, these bands are the intersegmental rings.  Each patch of bristles arises from a raised bump on the caterpillar's skin, appropriately called a wart.  As it gets older, the warts sport bright red spots, making the animal even more attractive (or alarming, depending on one's viewpoint). 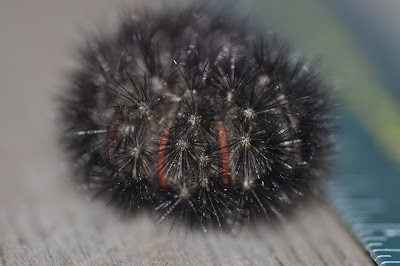 I waited quite a while last night for the animal to uncurl so I could photograph it next to a ruler, for it is a very large caterpillar.  I sat with the dog for a bit.  I refilled all the birdfeeders.  I discovered and photographed a carpenter bee who is nesting in the porch railing (that's another post).  Finally, we went indoors and I took a much-needed shower (how can people stand this kind of weather?).   I peeked outside to see if the animal had moved yet, and it was gone.  Grabbing the camera, I sallied forth and found it had jumped from the porch railing to the ground and was beating a less-than-hasty retreat away from the house. 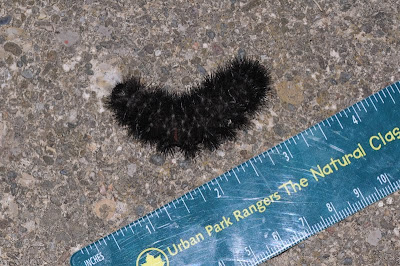 After snapping a couple more images, I gathered it back up and stuck it in a glass vase for transport to work the following morning, since that is where my caterpillar ID book resides.

So, here it is, Wednesday morning, and I've identified the behemoth:  it is a giant leopard moth (Hypercompe scribonia).  The caterpillar can get up to 7.5 cm in length, which is three inches.  This fellow, while big, is not quite there yet.  The adult moth is a very, very striking white with black markings, much like a snow leopard.

Well, how could I now let this animal go?  I simply must try to raise it to adulthood, for I want to see the finished product.  Fortunately, this caterpillar isn't too much of a specialist when it comes to food:  dandelions, plantains, cherry and oak leaves are all part of its regular diet.

Now here's what is interesting.  I thought that it would be perfectly fine to just let it sit in the vase for the night - since that's when I suspected it would be sleeping.  In fact, this particular species is active at night (hm...moth...guess that shouldn't be too much of a surprise), so when Toby and I encountered it last night, it was heading out to forage.  During the day it sleeps in leaf litter or under loose bark.

I think I'm in for a long wait, however, if I want to keep it until it turns into an adult.  According to my book, these fellows overwinter as caterpillars.  Hm.  I may have to rethink the whole raising bit.  Well, a little more research will help with the final decision.  In the meantime, it has a nice safe home in a small critter box stuffed with dandelion and plantain leaves.
Posted by Ellen Rathbone at 9:57 AM