Here there be Dragons

Dragonflies and damselflies are notoriously difficult to photograph.  Still, I never pass up the opportunity to give it a try.

I had a walk to lead this afternoon - six folks signed up, one folk showed up.   It was hot and humid, but we hit the trails anyway - who am I to stay inside when nature calls?

There wasn't much happening.  A few green frogs called out from a pond, but that was about it...except for the dragon- and damselflies.  These glorious insects were out on patrol, along with one eastern kingbird, keeping the skies safe for us humans; insects beware.

Mostly we saw the same characters that I saw Thursday afternoon:  the ebony jewelwings along the wooded edges... ...and the dot-tailed whitefaces hovering over the pond. 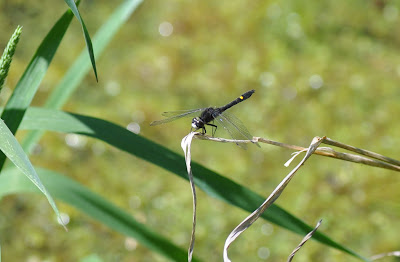 We saw male and female common whitetails (dragonflies, not deer), but they were not amenable to having their photos taken.  However, this very handsome Canada darner (Aeshna canadensis) took a nice long pause on the side of a tree, giving me enough time to dig the camera out of my backpack and take not one, but two shots. 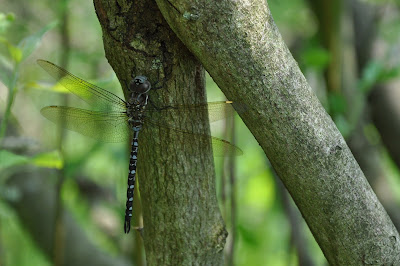 I have a bumpersticker that was given to me by a friend, which reads:  Do not meddle in the affairs of dragons, for you are crunchy and good with ketchup.  I think insects should read this, reflecting on the appetites of dragonflies (and their kin).  I, for one, am glad that there are dragons around, even if they are small and only after insects.
Posted by Ellen Rathbone at 4:22 PM