Chicken of the Woods

Last night Toby and I decided to take the “sewer trail” around behind the ‘burbs for a change of scenery. About half way down the path, I saw a ruffed grouse standing up on the raised man-hole. She must’ve seen us coming, for she jumped off and headed into the woods. As soon as we drew close, she went into action, doing her “poor-me-I-have-a-broken-wing” act. Unlike the dog, I was not fooled – I knew there had to be chicks somewhere nearby. A quick scan of the underbrush, and sure enough, there was one fluffy peep dashing about the forest floor. Meanwhile, Mom was tearing headlong through the trees, body so close to the ground that she looked like she was on wheels. Her head was stretched out in front, horizontal to the ground, and her right wing drooped. Toby was all excited: he swallowed her act hook, line and sinker. 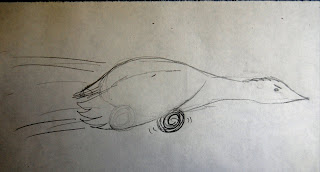 I wondered, then, what she would do if we turned back towards her chicks, so I reeled the dog in and we walked back. I could hear the soft peeps of the chicks, but their camouflage worked well – I couldn’t see a one. After a few moments, I decided we should finish our walk. As we headed back down the trail, I could see that the mother had given up her act and was returning to her brood. This time, however, she stayed still and quiet in the underbrush and let us pass. Must be she figured we were far enough away that her babies were safe.

Grouse are interesting birds. To me they are essentially chickens. They look like chickens, they act like chickens. And, in my humble opinion, they are about as dopey as chickens. Whenever I come across a grouse in the road, it just stands there, never even trying to make it off the pavement. This is why so many end up as roadkill.

But they are beautiful. Their cryptic coloration is ideal for hiding in the woods…if only they would stay still. But no…as soon as danger is perceived (real or not) they flush with a thunder of wings for the trees (makes you wonder why they stand still on roads then, where their camouflage does them no good). The males are especially stunning when they fluff out their neck ruffs. No doubt their name comes from their similar appearance to the noblefolk of Europe from the time of Queen Elizabeth I, many of whom wore large starched ruffs around their necks as well. Must’ve been terribly uncomfortable. As a matter of fact, I seem to recall reading that that the starch used for these ruffs was so caustic that many suffered from severe skin irritations, all in the name of fashion. Go figure.

Grouse are probably the most interesting in the winter. To get ready for winter survival, they grow projections along the sides of their toes, funny little scales that increase the surface area of the feet, effectively turning them into snowshoes, enabling the birds to walk across the surface of the snow. Once winter comes, and snow has drifted into deep piles, grouse will often tunnel into the snow banks for the night, like an Eskimo in an igloo. This is a great survival strategy for when the temps plummet below zero, but if the snow should develop a hard crust over night (say it rains and freezes, for example), the safe igloo becomes a tomb.

From now until the snow flies, you can expect to hear the drum of the grouse almost any time you walk into the Adirondack woods. If you are very lucky, you will get to witness this in action. The male sets himself up on a choice log, stands up tall and beats the air with his wings, each thrust making a thumping sound. The cadence starts slow, speeds up as the wings become a blur, suddenly stopping with a PRRRRRR. A couple years ago I had a front row seat to a spectacular grouse display. Two males were on the ground below a shrub, each taking turns strutting about and drumming, trying to impress the female who was perched in the branches above them. It was worth the price of admission to see.
Posted by Ellen Rathbone at 11:34 AM