Rockin' in the Adirondacks

While on my vacation, I took advantage of the time off to visit one of the Park's popular attractions: Natural Stone Bridge and Caves, located just north of Pottersville (exit 26 from the Northway). 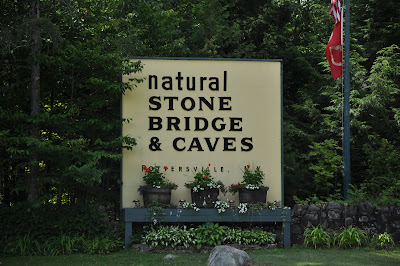 The day I went it was sunny and warm, and the crowds were making the most of it. Once I made it through the entrance line at the gift shop and onto the grounds, I began my self-guided tour of the rocky formations carved out by Trout Brook. 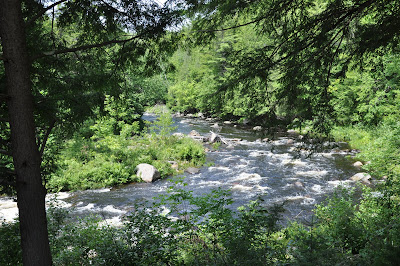 The tour takes you first through many family-friendly exhibits, like this one about petrified wood. While interesting, these exhibits don't necessarily have a lot to do with local geology (like the nearly four-foot-long cluster of amethyst crystals); they are obviously put together by someone who loves geology in general. 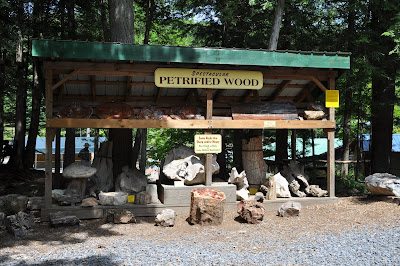 The paths are pretty well marked, consisting largely of narrow wooden stairs and walkways. Many bring you out to rocky prominences, or take you to spots where you can look back on the formations created by thousands of years of sculpting by water. 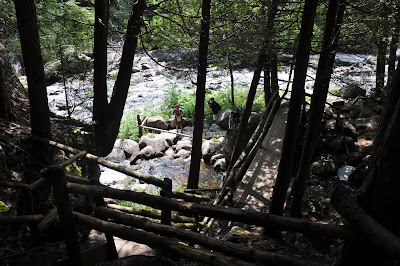 The Stone Bridge is one of the big draws. According to the signs, this is the largest naturally occuring stone bridge in the eastern US. The large slab of rock in front of the bridge fell from the ceiling of the bridge back in the 1950s. As a result, they say, the bridge is now stronger and safer than ever before (thanks to the loss of all that weight). Can you imagine the sound it must've made when it parted company with the parent rock?!? 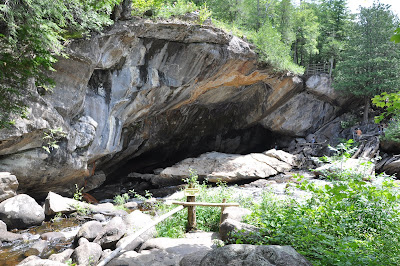 Winding along the paths, you can peek into a small cave and, if water levels are just right, you can see the water rushing through. Piles of foam flecked the walls, lit by strategically placed colored lights. Very difficult to photograph.
In one spot you get to walk through a short tunnel. Follow the light! 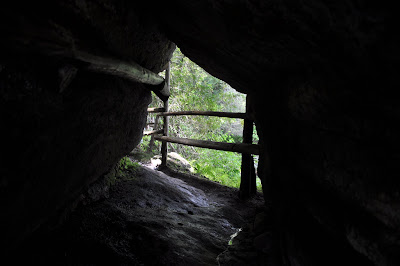 As I was leaving Peter Pan's Peephole (a tiny hole in a tiny cave through which you can see the water rushing through the cave below, and which didn't show up at all in any shots I took), I saw two very large spiders guarding their very large egg sacs. I wonder how many visitors never saw them. Probably a good thing. 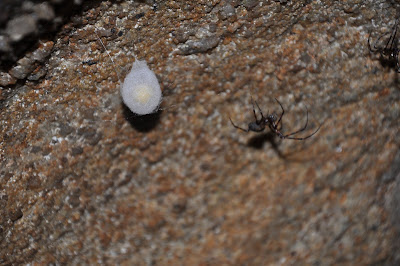 The river comes crashing along over rocks and boulders and disappears into the caves. Most of its underground journey seems to be pretty short, for it's only a few feet (20 to maybe 100) later on it reemerges, sometimes in a rush, 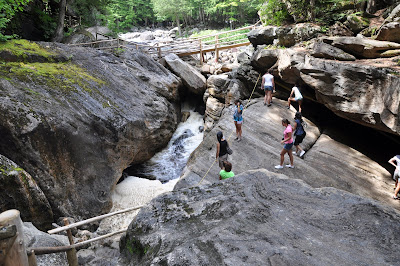 and sometimes in a gentle swirl. 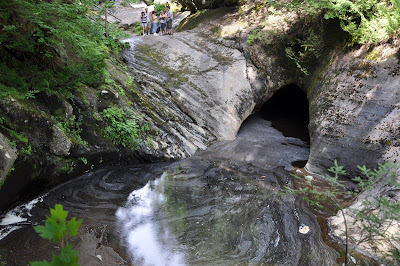 The potholes, made by the grinding action of the rocks that now sit in them, are pretty neat. I've seen some nice potholes along the Mohawk River near Little Falls, but the ones here are the largest I've seen. And every kid who went past them carrying a walking stick had to plunge his stick into the water to see how deep it was. 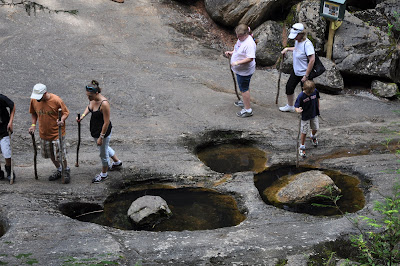 If You Go: Be sure to wear appropriate footwear! I can't tell you how many visitors I saw with flipflops! They won't let you in unless you have rubber-soled shoes on; if you don't have any, they will gladly rent you a pair. Also, bring your money. The entry fee is about $13 for adults (and I think about $8 for kids, but it could be less), but you may also find yourself drawn to all the beautiful rocks and minerals they have for sale in the rock shop. I was tempted by the cave bear teeth (very cool), but reason won out (what would I ever do with one) and I left with only memories and some nice photos.

Advertisement: This Saturday (15 August) the Newcomb VIC is hosting the Second Annual Rock Fest (10:00 AM - 4:00 PM). Geared towards real rock hounds, this program features lectures and field excursions by New York State Geologist William Kelly (Geology in the Park), Steve Potter of the DEC's Division of Mineral Resources (Rocks as Resource), the Adirondack Museum's Christine Campeau (Mining History of the Adirondacks), and Paul Hai from the Adirondack Ecological Center (Of Mines and Men - a Tour of the Tahawus Mines). We will also have exhibitors in the lobby: Natural Stone Bridge and Caves, High Falls Gorge, the Adirondack Museum, the Adirondack Park Institute, the Department of Environmental Conservation, and the NYS Geological Survey. Free and open to the public.
Posted by Ellen Rathbone at 10:34 AM