Yesterday evening I returned to the scene of the crime, so to speak. Vince needed more information than I could remember, so after inhaling a quick dinner, I grabbed my camera and a ruler, and Toby and I returned to the trail. I was surprised to find a new deposit right next to the old. 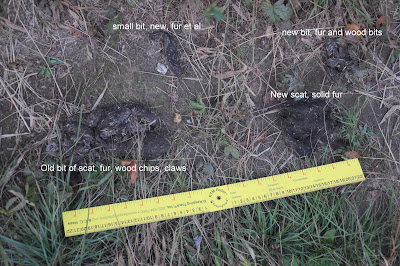 Unfortunately, it was closing in on 7:00 PM when I reached the item in question. Although out in open areas the sun was still bright and visible, at this spot the sun was behind a mountain/hill/clump of trees, which meant lighting was poor. Photos taken sans flash are all dark and blurry (it's difficult to hold a camera and a dog steady at the same time). Photos taken with the flash didn't turn out much better. I think my next camera purchase will have to either be an external flash, or a macro lens. Hard choice. But I digress...

Here is a close-up of one of the new bits of scat. As you can see, it is filled with wood chips and coarse black fur. 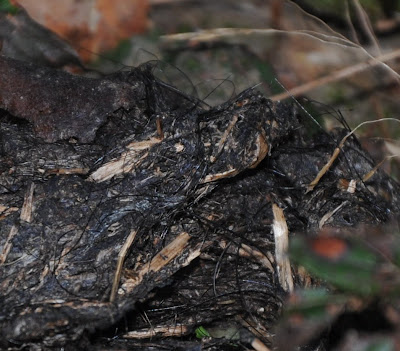 This photo shows a good-sized clump of fur - almost like the tip of a weasel's tail in winter. I use this comparison simply for description, for the following images will prove that the food item was much larger than a weasel. 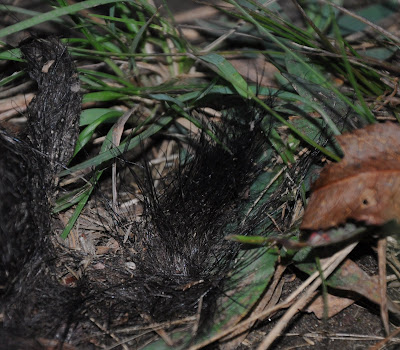 See? It's a claw! I found this in the original scat. Using a stick, I started to pick apart the largest bit of the old scat, the bit that in the original photos looked like a football with two sausages stuffed inside. 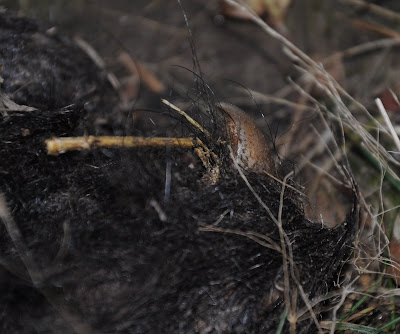 Further picking through the scat yielded a second claw. And since I had a ruler, I could demonstrate immediately just how big the claws are. 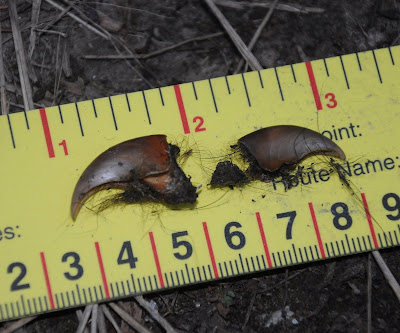 Now, I still don't know whose scat this is, but it looks to me like it ate a fisher. Why fisher? Well, the coarse black fur is one clue. The claws are a second clue. As previously stated, the claws are too big to be that of a weasel (as in short- or long-tailed). They are even too big to be from a marten (and the fur is the wrong color for a marten). Fur color might suggest mink, but not that coarse, and not with claws that big. We have a stuffed fisher here at work, and the claws are about the right size for that.

But, just to prove that I have an open mind, let's consider other options. What else could have coarse dark fur and large claws? A bear? Maybe a young bear. Coyote and fox and bobcat are eliminated because the fur is all wrong; these three animals have lighter colored fur. Yes, they also have black fur, but had it been any of those, there would very likely be evidence of some lighter fur, which there wasn't.

So, we have a rough idea of what was eaten, but not who did the eating. What would eat a fisher or a young bear? This would likely depend on whether the prey was killed and eaten, or if it was scavenged. This I cannot tell.

Unless the bits of wood are a clue.

I think I'm still leaning towards coyote as the predator and thus the depositor of the scat, albeit a very large coyote. It could be a bear, too, I suppose, but the formation of the scats just seem too canid-like to me. Our handy-man here at work, who has a background in wildlife management, is leaning toward bear.

I welcome the opinions of other scatologists and trackers.

Email ThisBlogThis!Share to TwitterShare to FacebookShare to Pinterest
Labels: scat