A Morning En Route to the Fen

Friday I decided it was high time I went out on the trails, especially since I had heard of some good finds out in our little fen.  So, camera in hand, I hit the trails.
My first stop was the native plant gardens around the end of our building.  These gardens have been established to show visitors a) what our native plants look like and b) how they can be just as lovely in our gardens as any horticultural plant from overseas. 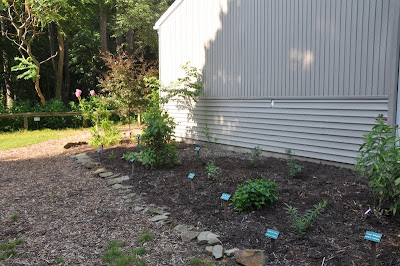 The showstopper right now is Queen of the Prairie, which is blooming beautifully! I had one of these show up in the "wild area" of my yard back in Newcomb - no one knew what it was, for it isn't a native plant for the Adirondacks.  How it got there, we will never know. 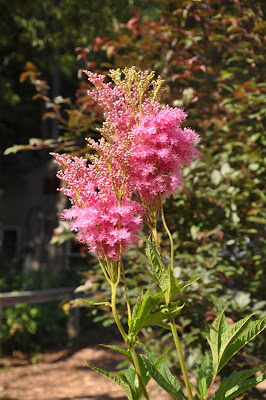 In the woods and along the ways pokeweed is just starting to bloom.  This is a plant I learned a year or two ago from my friend Jackie, who introduced it to me along a canal near Schuylerville, after we stopped at a cider mill for apples, cider and homemade donuts. 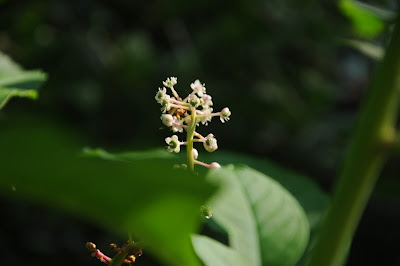 We have quite a healthy population of pokeweed here.  In fact, here is a shot of me in front of our most robust population of this plant.  I am just under 5.5' tall, and these plants, as you can see, are well above my head.  They are a native plant, which produces purple berries later in the season.  These berries are hugely important to  our birds, so this is a great plant to have on your property if you want to attract wildlife! 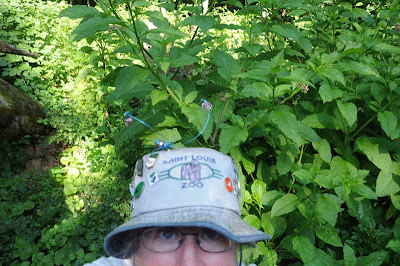 The small pond out along the trail is carpeted in green.  The hot weather and lack of rain seem to have done the pond plants well. 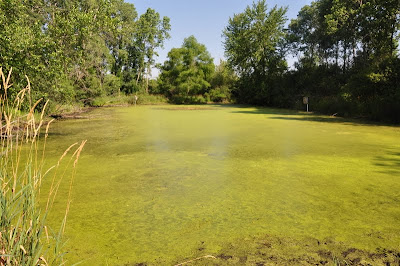 My goal, however, was the prairie and the fen.  What was blooming?  I was wasn't surprised to find butterflyweed flowering, since it is in bloom all over the place.  This member of the milkweed family does very very well out here in southern Michigan. 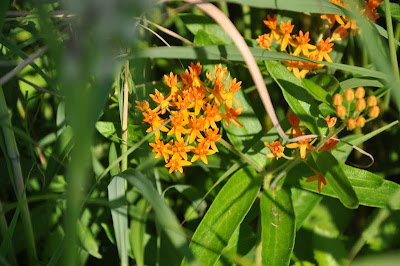 The spiderworts are starting to fade, so soon there will be seeds to collect.  This fella, though, wasn't after the seeds.  When I tried to look this caterpillar up, I came across two possibilities:  salt marsh moth and yellow bear.  I sent the image off to BugGuide and it immediately came back identified as the salt marsh moth.  Really?  But there are no salt marshes around here.  Turns out, we have to look at the history of this critter to understand how it got its name.  It was named in the 1770s, when it was "discovered" by early settlers, who first found it along the eastern coast, in the salt marshes.  This moth, however, lives in other habitats, but the name stuck. 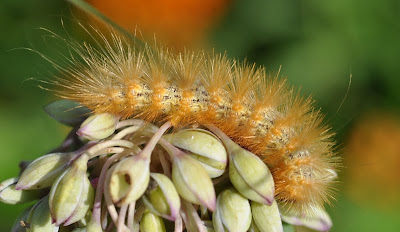 Bee Balm!  Monarda!  Here we have our native monarda, which is such a lovely lavender color.  I had some of this in my gardens in Newcomb, but it is so nice to see it growing in the wild, where it belongs.  A favorite of butterflies, bees and hummingbirds, it is a native plant we should all encourage. 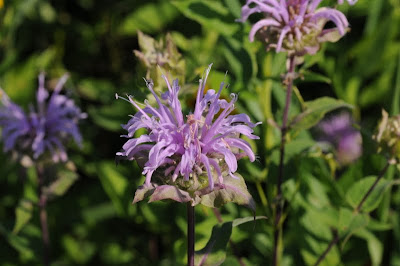 I was a bit surprised to see a lobelia in the prairie.  This is spiked lobelia, and while it is a native prairie plant, in my mind I still see lobelias as wetland species. 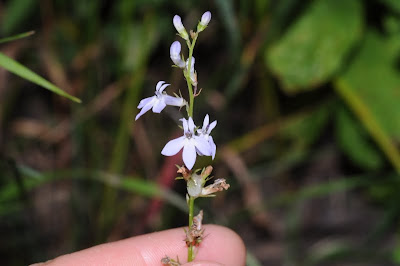 Another new plant for me was blooming out on the prairie:  flowering spurge.  Like so many of the plants here, it had a difficult time identifying this, but one of our staff sat right down with me and worked it out.  "I'm pretty sure its a spurge," he said, and sure enough, with some intense thumbing through books, we found it.  Apparently once we reach mid- to late summer, these plants will make the prairie look like it is covered with baby's breath. 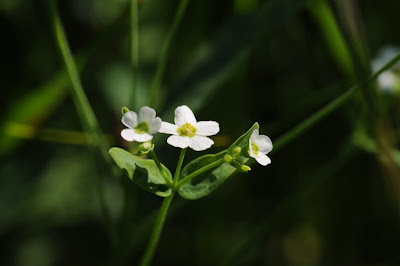 Black/brown-eyed Susans are just coming out now, too.  Nothing says summer quite like these lovely sunny flowers. 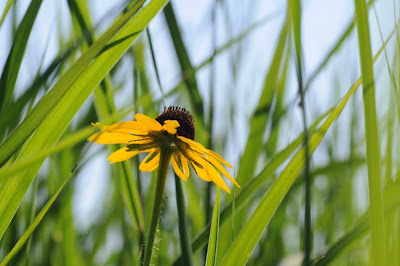 Here we are at the fen, my target.  I was surprised by just how much water was out here.  We haven't really had any rain of any significance for about a month (writes she, as a humdinger of a thunderstorm rolls overhead), and yet there were channels of water still out in the fen. 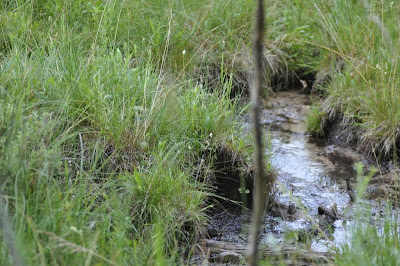 This was my target:  sticky tofieldia.  It was "discovered" out here last week by a fen specialist from The Nature Conservancy, making it a new plant for our native plant list.  I know this plant from the Ice Meadows along the Hudson River in the Adirondacks, so I was delighted to find it here. 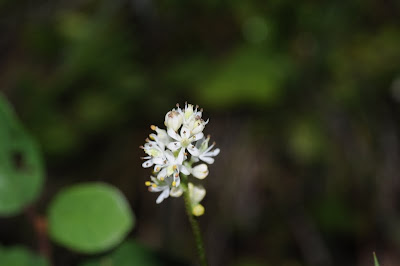 Now, this plant really threw me for a loop.  I thought "loosestrife" when I saw it, but it wasn't swamp candles and it wasn't fringed.  Nothing else matched it in my Newcomb's Field Guide.  I was frustrated.  When I came back to the office, Mark took one look at it and said "Oh, that's prairie loosestrife."  Which, just for the record, is NOT in Newcomb's!  Whew!  I was beginning to lose all faith in my favorite flower book and in my skills at keying out plants! 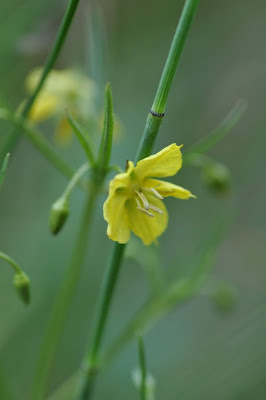 It was definitely a dragonfly sort of day.  This lovely twelve-spotted dragonfly obliged me with a perfect pose on a twig in its territory along the edge of the trail. 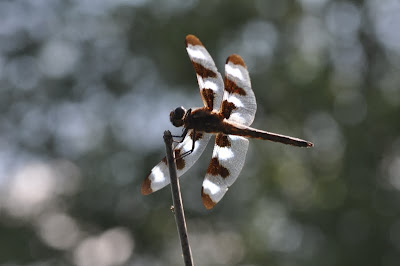 My favorite, however, was this one.  When I saw it, what caught my eye was a flash of copper - metallic copper.  The flash washed across the wings and body alike.  I tried to sneak up on it to snap a photo, but the flighty thing just wouldn't stay still in one place long enough.  It was frustrating.  But, then I discovered that there were quite a number of them darting about the prairie.  With extreme patience, I was finally able to get a couple shots good enough for ID:  it is an immature male widow skimmer. 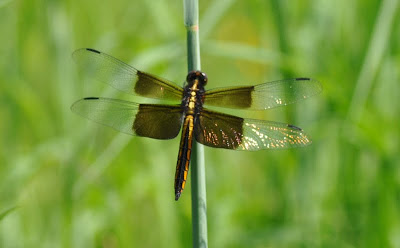 Finally, when I was back in the woods, I ran across a couple populations of these small, woolly insects.  I thought they were some kind of woolly aphid, but when I sent the photo off to BugGuide, it turned out to be a juvenile flatid planthopper - Anormenis chloris. 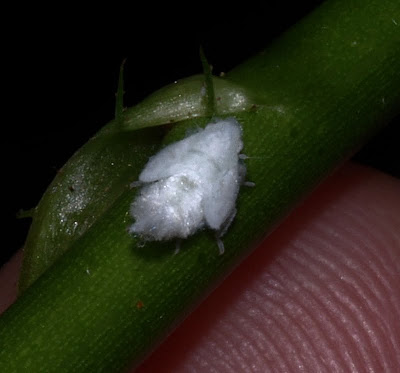 So, it turned out to be a great day of discovery.  Several new plants, some new insects - what more could a girl want?!
Posted by Ellen Rathbone at 12:54 PM