I give you...the Rattlesnake Master!

At last, my rattlesnake master's flowers have started to open!  I've been waiting for this for a year.

I had never heard of this plant until I moved here to Michigan.  Around our building at work, staff and volunteers have planted several native flower gardens, and among the plants was rattlesnake master (Eryngium yuccafolium).  Unfortunately, the plant that was planted there not only wasn't thriving, it seemed to have disappeared, but I was hooked.  Anything with a name like "rattlesnake master" must be fascinating.

Last summer I purchased one from WildTypes Native Plant Nursery, and tenderly  planted in front of the house between two spice bushes.  I watered it and nurtured it, but it didn't do a whole lot.  This spring the shoots appeared again, and it grew.

The leaves, as you might have guessed from the name, resemble those of the yucca - long silver-green triangles with spikes along the edges (ah-ha...it should be deer- and rabbit-proof), but this native tallgrass prairie plant is actually a member of the carrot family, not related to yucca at all.

Flowerheads started to form this summer and I've been waiting and waiting for a blossom to appear - checking the plant every evening when Toby and I go out for our walk.  This week I was rewarded. 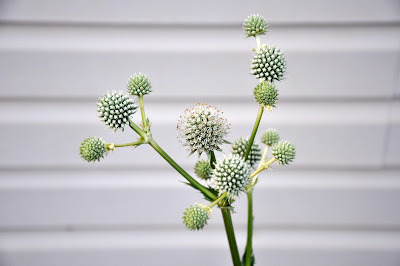 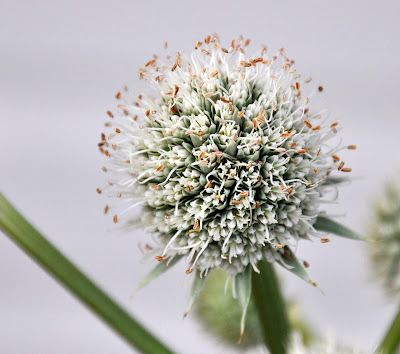 Okay, it may not be the showiest of flowers, but you have to admit, it is rather interesting-looking.  It sort of reminds me of buttonbush, a wetland plant that I will never see around my house (no wetlands...and so far this summer no rain, either).

This native plant is hugely beneficial to a whole slew of native insects:  long- and short-tongued bees, wasps, flies, butterflies, skippers, moths, beetles and plant bugs.  It even has it's own associated rare insect:  the rattlesnake borer moth, whose larva burrows into hte stem and feeds on the hpith.  I haven't seen any holes in my specimen, but now I know I should keep an eye peeld, just in case!

Most of these insects are after the flower's nectar, but some bees visit it to also collect pollen, which they stuff into the brood nests they make for their young.

According to various sources, Native Americans used this plant for a variety of ills, usually in the form of a bitter tea.  Early pioneers thought the root could be used to cure rattlesnake bites (they were wrong).  Natives also used the dried seedheads for rattles.

Why the name rattlesnake master?  I suspect it was from an unsubstantiated 18th century account by the trader James Adair that the Indians with whom he traded would chew on the roots, then blow on their hands before attempting to handle rattlesnakes, which they did without sustaining any injuries to themselves.  Adair turns out to be an interesting character in his own right, having traded with the Native American all across the southeastern US for most of the 1700s.  He left the trade to work on his book, which was based on his theory that the Indians were descended from the Lost Tribes of Israel.

ANYWAY...rattlesnake master...a very interesting plant that is quite at home in wet or dry prairies/grasslands, but also does well in open woods.  It's a good plant to have around, the insects will love you, the herbivores will leave it alone, it makes an interesting accent to your garden(s), and it does well here.  What more does one need, eh?  So rip out those non-native yuccas -  despite the lack of rain we do not live in a desert here.  Go forth and plant the plants that belong here.
Posted by Ellen Rathbone at 2:15 PM