A Bzzzy Day in the Garden

It's just the interns and I at work today, so I couldn't hit the trails. Instead, I dashed out into the garden to see who was hanging out in the flowers.

We had over an inch of rain yesterday (hooray!), and it was nice and cool last night (in the upper '50s - ahhhh), but today the sun is hot, and the humidity is trying to rise. A nice strong, but sporadic, breeze is keeping it fairly pleasant, though.

First up, we have our friend the small milkweed bug (Lygaeus kalmii). Nothing new to most people. These guys are often lurking about the milkweeds, where they ingest the latex-like sap, making them taste nasty to insect-eating predators. The red and black markings serve as a signal to "leave me alone - I taste bad." This one was tip-toeing across an immature echinacea blossom. 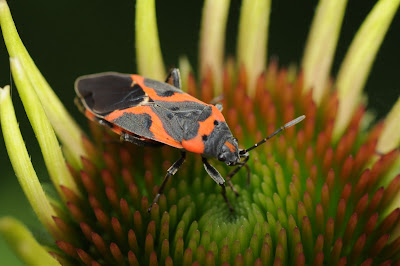 The stars of the garden, if by shear number alone, were the flies. Lots of flies, of all sizes, shapes and colors. Here is a sampler. I'm awaiting ID confirmations from BugGuide. 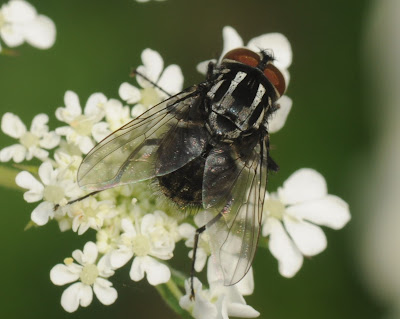 I wrote on my BugGuide ID request that I thought this looked like a house fly,
and it turns out it is in the house fly family (Muscidae).
It is a fly from the genus Graphomya, of which there are nine species in North America. 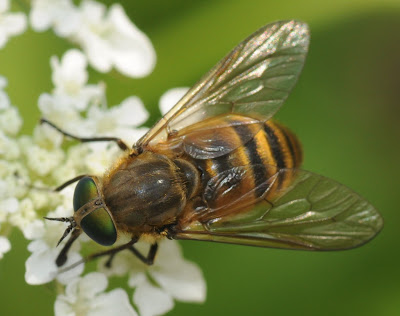 This turned out to be a horse fly! One expert on BugGuide called it
a Hippy Horsefly, Stonemyia tranquilla. This horsefly, apparently,
is not a blood-feeder, which is why it was supping at the flowers in the garden.
According to Marhshall's Insects - Their Natural History and Diversity, these
are "an entirely North American genus of unknown biology." That could
explain why I can't really find any info. about them! 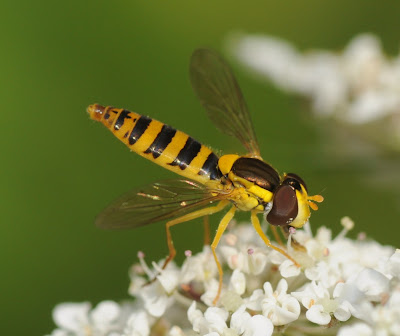 And this one is a Syrphid, one of the flower flies. It is a female from the genus Sphaerophoria.

This lovely damselfly caught my eye, namely because it is orange! I've never seen an orange damselfly before. It, like all the other damsels flitting around the foliage, was very small. It's body was no thicker than an applique needle, and maybe and inch and a half long. These insects are soooo thin that at first you aren't even sure you see them...but then you see the eyes bulging out the sides of the head, and that's a pretty good clue it's an insect. 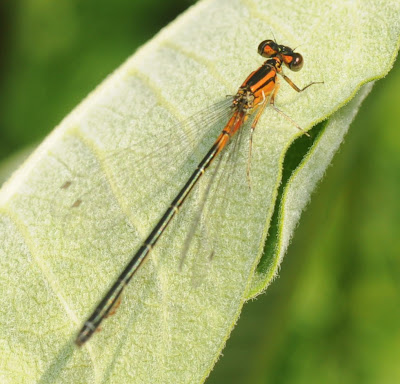 So, I took this lovely's photo and couldn't wait to ID it. Some sort of spreadwing, I thought, based on the the attitude at which it was holding its wings (a logical assumption). No orange spreadwings were in my field guides, although admittedly they are pretty basic books.

My next resource: the internet. I typed in "orange spreadwing damselfly." Nada. HM.


Finally, I went to the experts: BugGuide.net. I typed in "orange spreadwing damselfly" and two photos popped up. One was from Texas - I could eliminate that. The other was from New Hampshire - an immature female Eastern Forktail (Ischnura verticalis) - not a spreadwing at all!


These small damselflies are common across most of the eastern US ("eastern" meaning everything east of Washington, Idaho, Utah and Arizona). They are one of the first to fly in the spring and continue flying right up until the first frost in the fall. Their preferred habitat is any body of water that isn't moving rapidly: ponds, lakes, slow streams. They can be seen flying low in the vegetation along the shoreline (they rarely venture out over the water). OR, in my case, in the garden several hundred yards uphill and through the woods from the lake.


The males, by the way, are black and green (instead of black and orange), with a blue band near the tip of the tail.
Posted by Ellen Rathbone at 12:57 PM