Search for the Orchid - Part III

"We" were my flower friend Jackie and I. Sunday, which turned out to be a beautiful day, we met at the Ice Meadows. Jackie was pretty sure she could relocate this orchid for me, so we were on the hunt. We walked up and down, and down and up the boulders, cobbles, and massive shoulders of bedrock, but to no avail. We found lots of stuff, but not the orchid.

But, just so you all are not disappointed, I've swiped Jackie's photo of this orchid from her blog (http://www.saratogawoodswaters.blogspot.com/) and here it is: 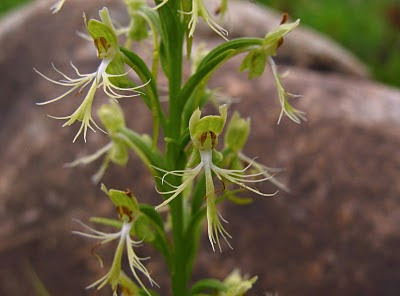 Now, isn't that a lovely, if understated, orchid? I've heard they exist up at the Paul Smiths VIC, too, but I've never seen one.


Here are some pics of what we actually did see.

Kalm's lobelia (L. kalmii) were blooming profusely all over the rocks. Looks a lot like the Indian tobacco I found last week, although the blossom is narrower. 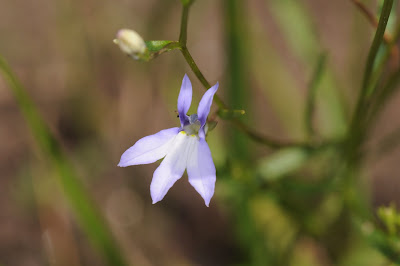 There were lots of little white asters blooming, and some large purple ones. According to Jackie, purple-stemmed aster (A. puniceus) is the only purple flowered aster that blooms this early, making it one of the easier asters to identify. Asters, like goldnrods, can be notoriously difficult to ID. 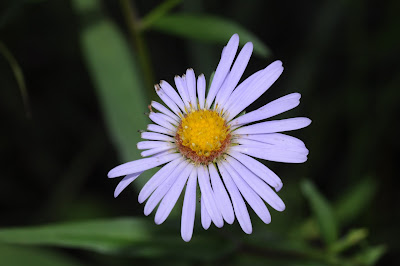 I had noticed these sweet little bell-like flowers all over the Ice Meadows last week when I was on my search. Did I photograph them or ID them? No, of course not - I had done what I apparently do a lot more often than I realized: I assumed (!) I knew what they were and ignored them. It turns out, it was a new flower for me: marsh or bedstraw bellflower (Campanula aparinoides). 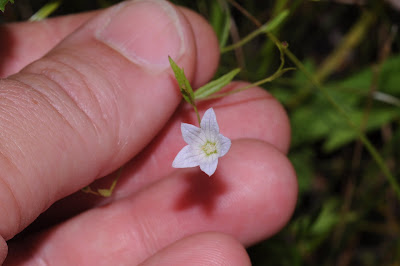 This funny looking plant is branched bur reed (Sparganium erectum), an emergent plant of many wetland situations. One website I found states "It is easily uprooted and therefore is not found on exposed shores or by rapidly moving water." Hm...then why is it growing here on the Ice Meadows, where moving water and ice are common through the winter and spring? Maybe it's in a little secluded nook that protects it from the worst ravages of its chosen home. 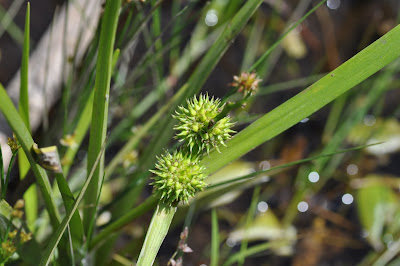 I was duly impressed by this goldenrod. There it was, blooming on a very small ledge, down the side of a VERY steep rock. It was probably a good six to eight feet below me, straight down. 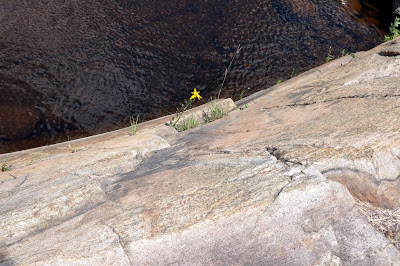 And just upstream was Jackie, taking photos of the river, and of me taking a photo of the goldenrod above! 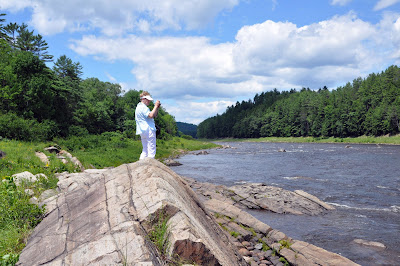 Meanwhile, about a half-dozen turkey vultures were circling overhead. HM...were they waiting for one of us to take a wrong step? Or was there a meal on the other side of the water? Perhaps they were, like us, just enjoying the strong breezes that were blowing down the river. 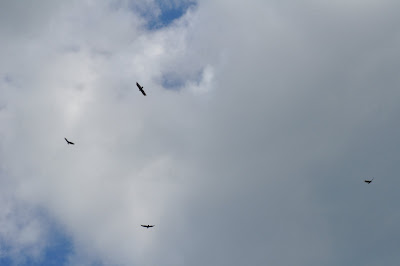 We had over an inch of rain Friday afternoon, so there were plenty of little pocket-sized puddles filling the depressions on the rocks. 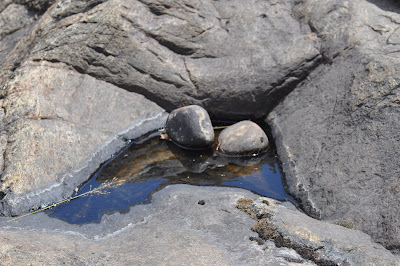 For a delightful sensory experience, one should find some mountain mint, gently crush the leaves, and give it a sniff. It is one of the BEST mint scents in the world! I first encountered mountain mints in, of all places, the Great Swamp in New Jersey. Haven't seen them since, so I was thrilled to find them here. 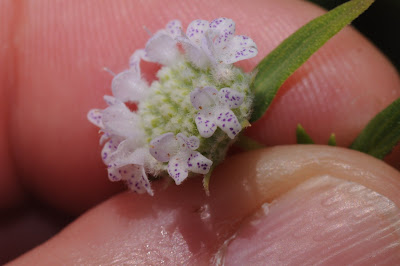 This is narrow-leaved mountain mint (Pycnanthemum tenuifolium), and from a distance (it is on the ground and you are standing above it), you'd never notice the purple dots that grace the petals. Jackie handed me her hand lens and there they were! 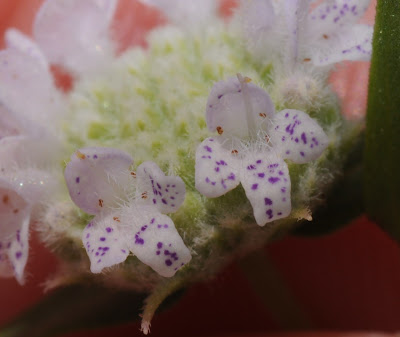 We had a number of dragonflies and damselflies flitting around us, mostly guarding the various puddles and pools. There are several red dragonflies in the world, but this one I believe is a band-winged meadowhawk (Sympetrum semicinctum). We also saw several male eastern forktails, the masculine counterparts of the orange damselfly on my previous post. 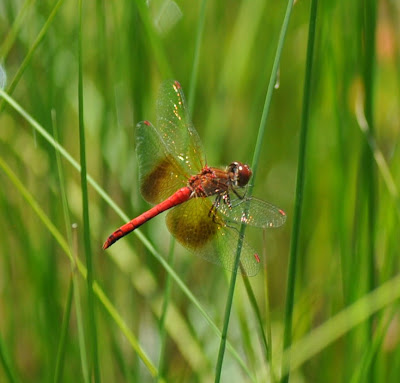 Jackie was enthralled with this "stuff" that was clinging to the rocks underwater at one of the small pools. We both had difficulty photographing it. For me it was a matter of balance - the only dry place was a very narrow strip of rock - about the size of one foot. With my macro lens, I couldn't crouch there still enough to get a clear photo, and there was no way to spread me feet apart for a more secure stance. Anyway, we suspect it's an alga of some sort - it had these wonderful yellow blobs dotting its otherwise green surface. Hopefully an aquatic plant enthusiast will help us out with ID. 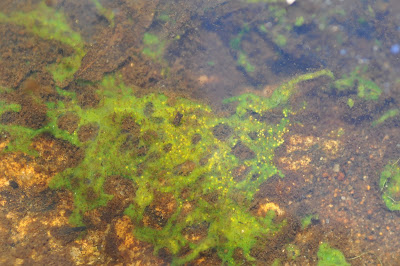 Here's another grass that was in bloom. I have no idea which one it is, but I thought it was quite lovely. 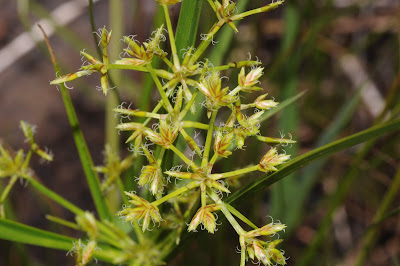 This viceroy butterfly was enjoying a meal on the Joe-Pye weed. Viceroys looks a lot like monarchs, although they are smaller and have that extra black line on the hindwings. 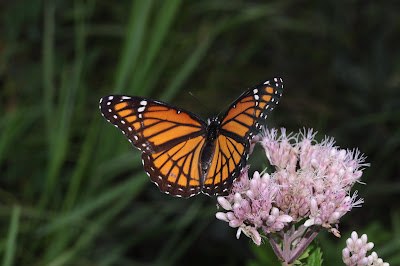 We found lots of boneset buds, but just this one plant actually in bloom. I belive this is just regular old ordinary boneset (Eupatorium perfoliatum), although I suspect the scientific name is one of those they've changed. Again, my field guide with all the corrections is at home. 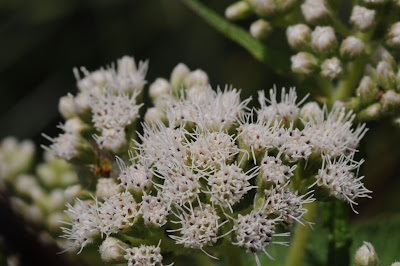 And we wrap up with this dragonfly, which I was surprised to ID as an elfin skimmer (Nannothemis bella). I thought for sure it was a white-faced meadowhawk, based on the last photo. 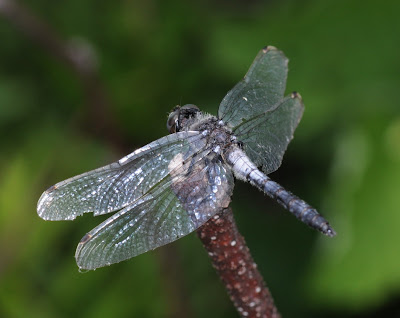 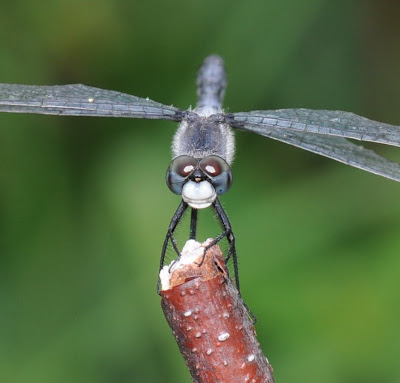 Have a Happy Day!
Posted by Ellen Rathbone at 11:09 AM