Wednesday evening, about 6 PM, a storm blew in to town. The power went out, came on, went out, and finally came back on 20 minutes later.

The wind blew, the rain fell. It was so intense, it looked more like a blizzard in winter than a rain storm, what with the sheets of rain blowing off roofs and swirling down the street.

By 7 PM it was over. Toby and I went out for our walk and saw a small tree down along the highway, but otherwise not much damage.

Thursday morning, many DOT trucks passed us on the road. As I drove in to work, I saw them all along one house - and there, on the roof, was a very large tree.

Thursday night, on the way home from our concert in Long Lake, the woman with whom I was carpooling wanted to stop and see how her aunt was doing. We pulled into the driveway, and this is what I saw (in the dark): 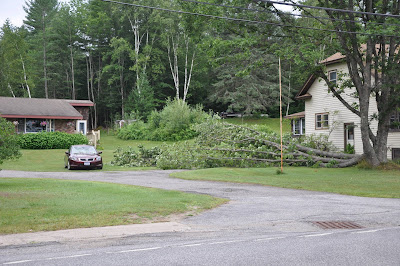 The car had been under the tree when it fell. As you can see, the window is a bit scratched. 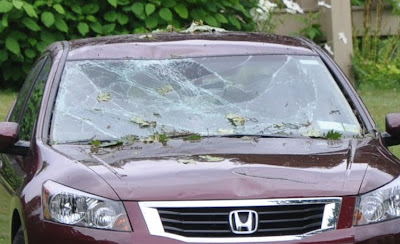 It was at this point that I learned about the Microburst. We have a small Fitness Trail in town that runs down toward the Town Beach. My carpool companion mentioned the microburst at the beach. "What?" I said. "Oh, you didn't hear? Yeah - it looks like someone clearcut the woods along the fitness trail."

Well, I had to check it out, so this morning I stopped by on my way to work. About an acre of woods was just totally flattened. It was impressive.

Here is the view from the parking area: 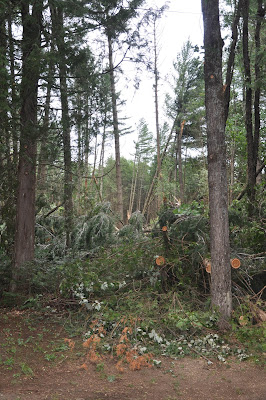 I couldn't walk in far enough to get a good shot, though. 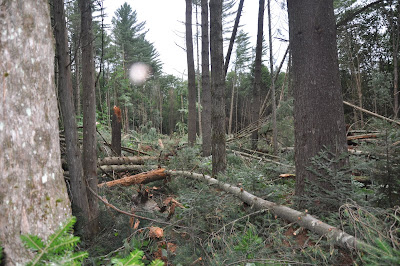 So, I walked down the Fitness Trail. The flattened area goes right across the trail. 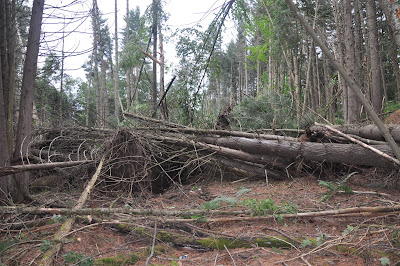 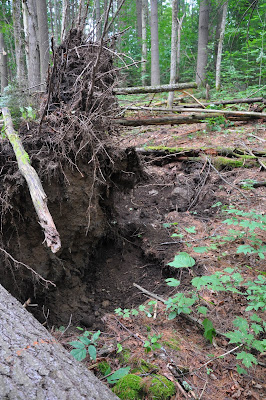 The holes left by these roots were at least three, maybe three and a half, feet deep. 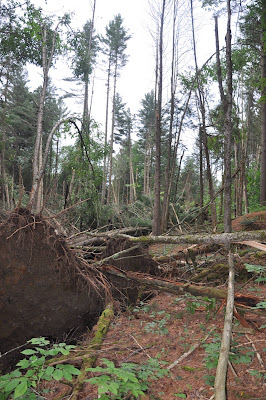 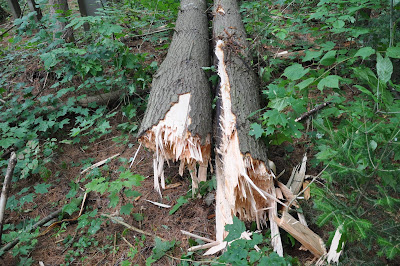 These trunks are about 18" diameter. 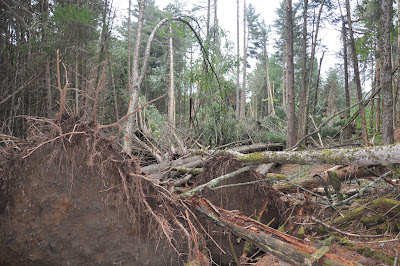 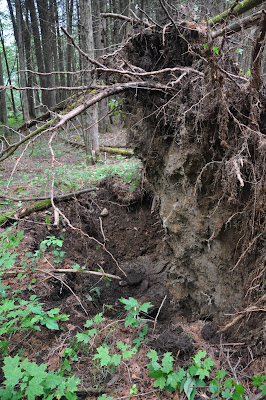 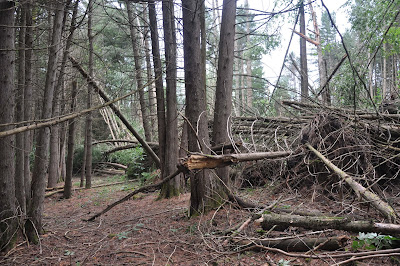 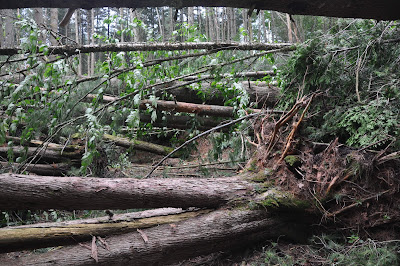 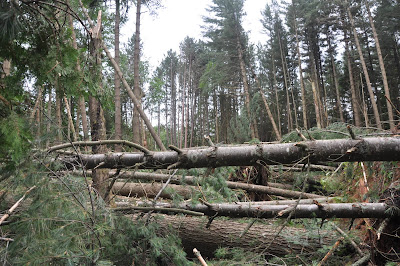 Here's what Wikipedia says about Microbursts:
A microburst is a very localized column of sinking air, producing damaging divergent and straight-line winds at the surface that are similar to but distinguishable from tornadoes which generally have convergent damage. There are two types of microbursts: wet microbursts and dry microbursts. They go through three stages in their life cycle: the downburst, outburst, and cushion stages. The scale and suddenness of a microburst makes it a great danger to aircraft due to the low-level wind shear caused by its gust front, with several fatal crashes having been attributed to the phenomenon over the past several decades.

A microburst often has high winds that can knock over fully grown trees. They usually last for a couple of seconds. 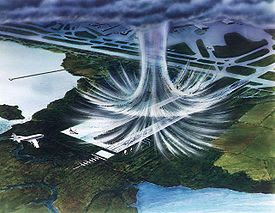 A microburst is a small, very intense downdraft that descends to the ground resulting in a strong wind divergence. The size of the event is typically less than 4 kilometers across. Microbursts are capable of producing winds of more than 100 mph causing significant damage. The life span of a microburst is around 5-15 minutes.

When rain falls below cloud base or is mixed with dry air, it begins to evaporate and this evaporation process cools the air. The cool air descends and accelerates as it approaches the ground. When the cool air approaches the ground, it spreads out in all directions and this divergence of the wind is the signature of the microburst. In humid climates, microbursts can also generate from heavy precipitation.
Our local youth program had a group camping on the beach this night. When the storm hit, one of tents blew over onto the other tent. The group leaders wisely decided to pack up and leave.
Mother Nature is an impressive force - it is amazing what she can do, eh?
Posted by Ellen Rathbone at 9:56 AM

Email ThisBlogThis!Share to TwitterShare to FacebookShare to Pinterest
Labels: weather