The Search for the Orchid - Part I

Monday I was on a mission. My friend Jackie had written about a ragged fringed orchid she found along the Ice Meadows and I was so taken with it (she had a photo), I simply had to try and find it. The thing is, I had to be in Tupper Lake at 2:00. The Ice Meadows are an hour away to the south and east, and Tupper is an hour away to the north and west. Things were going to be tight.

Not knowing which part of the Ice Meadows she was walking when she found this orchid, I had to make a choice. I chose the state forest, which is along the river road to the north of the Hudson.

The sun was out, the wind was blowing, and the humidity was on the rise. I had about an hour and a half - so I was hoofing it. 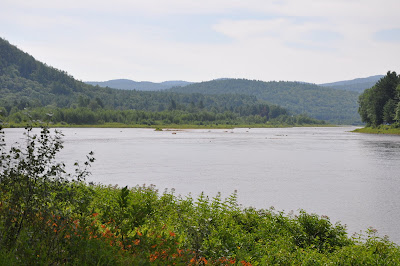 The first plant to catch my eye was this lovely. And as lovely as it is, it is not a welcome plant. It is purple loosestrife (Lythrum salicaria), Undesirable #1. 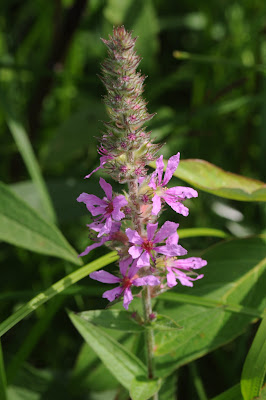 The Joe-Pye weed (Eutrochium dubium) was budding, but not quite in bloom. 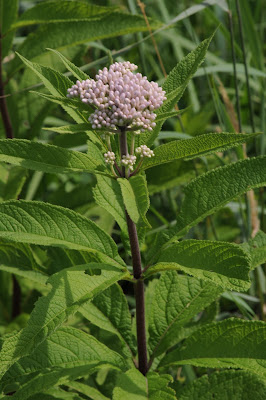 Steeplebush (Spiraea tomentosa) is also called hardhack. I'm not sure why - I always think of "hardhack" as a dried bread that our ancestors ate when travelling. I'll have to do some research into this. 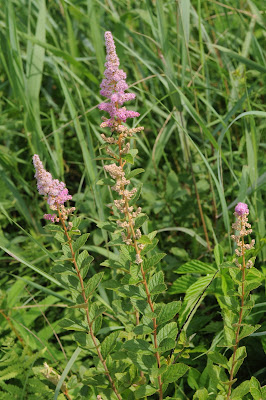 Isn't this one of the prettiest milkweeds? This is swamp milkweed (Asclepias incarnata), and it's always this lovely fuschia color. 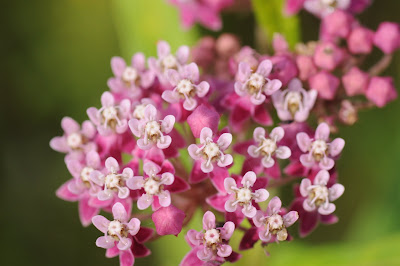 As I said, the wind was really blowing quite a bit. Made macrophotography well-nigh impossible! This was the best shot I was able to get of these lovely flowering grasses, which still have some dew droplets clinging to them. 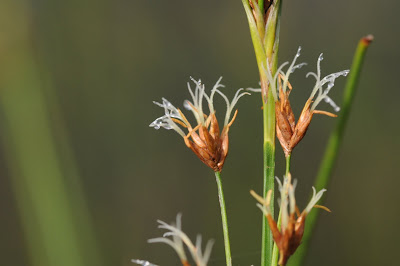 Another blossoming grass, this one is yellow-eyed, and we think it's the Carolina yellow-eyed grass (Xyris caroliniana). The flower looks to me like a buttercup that has lost 2/5 of its petals. 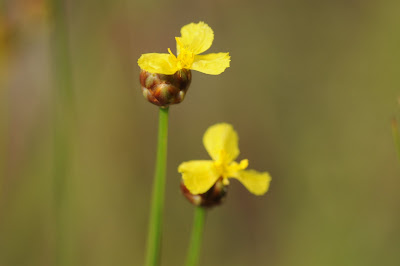 Blue vervain (Verbena hastata) was also present. For some reason, my camera just does not capture blues, purples or reds in their true colors. This flower is a much richer color than it appears here. 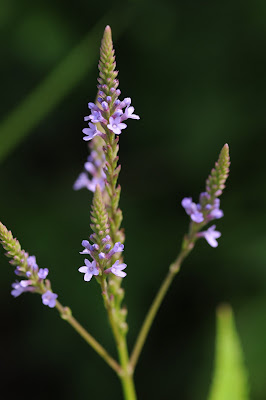 This little butterfly, an American copper (Lycaena phlaeas ssp. americana) was flitting all over the place. It turns out that the male is a rather pugnacious animal, staking out his territory and aggressively chasing away any intruder, be they other coppers, birds, or people. Supposedly even a shadow passing overhead will set him off! 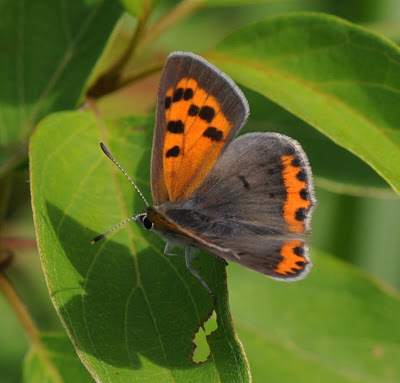 I originally thought the following plant was moneywort (Lysimachia nummularia), because it was growing so low to the ground, but my friend Jackie told me she was pretty sure it was one of the loosestrifes. So, I've keyed it out again (landing once more near moneywort), but now agree with Jackie that it is most likely a small fringed loosestrife (Lysimachia ciliata). 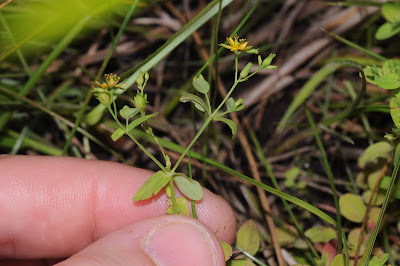 Many a frog made a mad dash from my blundering boots. Most scooted into the water, but this fellow headed inland. While not ready to bet the farm on it, my guess is that this is a green frog (I think I see dorsolateral ridges). 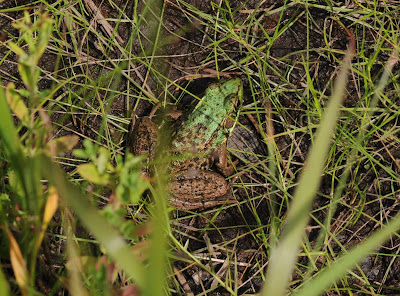 Ah, now THIS was a nice little find. Well, visually it was. It turns out, however, that this caterpillar is fairly common and can be something of a pest. It is the larva of a, you're gonna love this name, smeared dagger moth (Acronicta oblinita). The larva, also called a smartweed caterpillar, is a "pest of apple and other fruit trees," but also eats sheep sorrel (a pernicious weed at my house), dock, clover, corn, cotton, elms, grasses, pines, oaks, smartweed, straberry lants and willows. Well, it's still a rather pretty caterpillar. 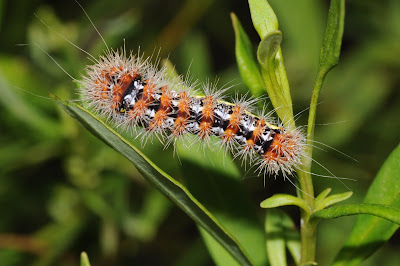 As I cruised the shoreline, searching for my orchid, I watched a tail disappear into the vegetation. Moments later it reappeared on the other side as this northern watersnake (Nerodia sipedon) slid into the river. It poked its head out of the water to see if I was in pursuit. When I moved, it submerged and slid under a rock. 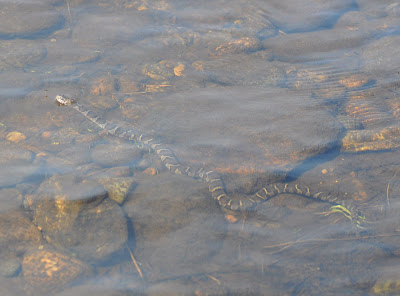 Soon it peeked out, staring right at me. It wanted to make sure I wasn't coming after it. Northern watersnakes are harmless to people, although they can give a nasty bite that will bleed profusely thanks to the anticoagulants in its saliva. Knowing this, I left it alone. 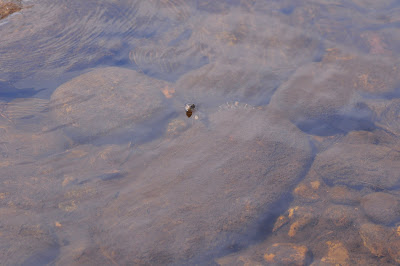 A lone monkeyflower (Mimulus ringens) was blooming from behind a boulder. 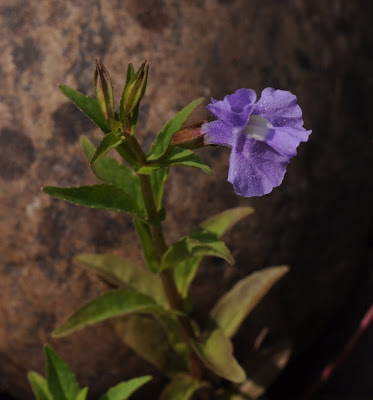 A cluster of three of these lovely plants caught my attnetion. They reminded me of peas, which, it turns out, makes sense because they are in the pea family. This is showy tick trefoil (Desmodium canadense). Interesting genus name - very similar to that of vampire bats (Desmodus). 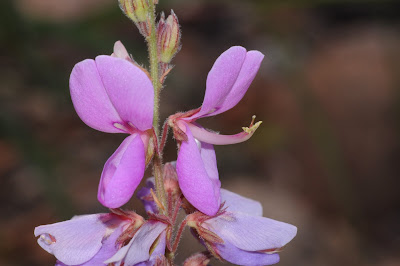 Some flowers bloom and vanish, all within a day or so. Others seem to bloom all throughout the summer, like these harebells (Campanula rotundifolia). 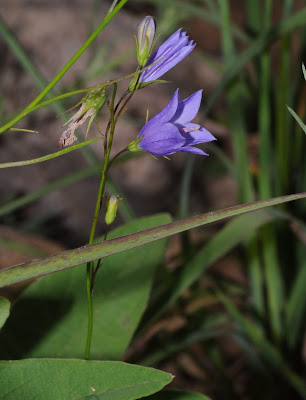 Look - it's a grand finale at a fireworks show! Actually, it's tall meadow rue (Thalictrum polygamum), but it sure looks like fireworks to me! 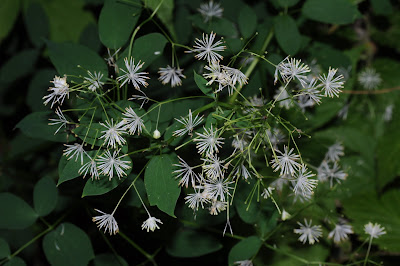 Jackie had written that the Canadian burnet (Sanguisorba canadensis) was blooming. This is the only one I found, and it was just barely starting to blossom. 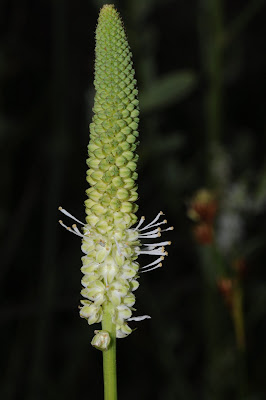 My time was up and I had to get home to pick up the dog for his vet appointment. No orchid. :(
Posted by Ellen Rathbone at 11:59 AM