Yesterday I spent part of the morning botanizing with Woodswalker down at Skidmore Woods. It was so hot and humid that it felt like we were in the jungle, and yet the trees were still mostly leafless, and last fall's leaves still crunched underfoot. It is, afterall, still April.

But what a treasure, this pocket of woods! The varieties of flowers...stuff I haven't seen for years, and some things I've never seen...it almost leaves one speechless.
Here are a few of the highlights: 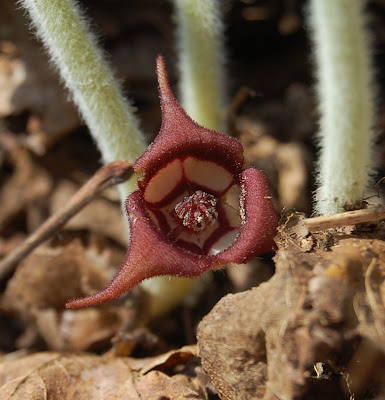 Wild Ginger (Asarum canadense) - is this a great-looking flower or what?!? I don't know if ginger is considered a primative plant, but the flower sure strikes me as primative. It reminds me of that enormous tropical flower (as in 2+ feet across) that attracts pollinators with a stench of rotting meat. Wild ginger, however, is a small flower, and while I didn't get my nose right down to it, I did not catch any whiffs of decaying flesh. Now, this is not the ginger whose root you find in the grocery stores, but it certainly was used as much by the native peoples. My ethnobotany book has a whole page of medicinal uses and half a page of food uses for it. For me, I think I will just admire the flower: one-of-a-kind. 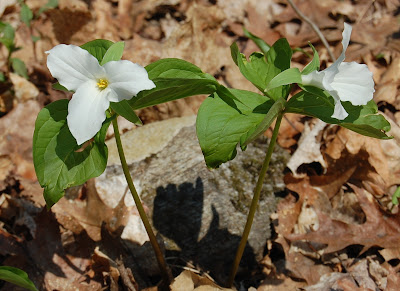 Large-flowered Trillium (Trillium grandiflorum) - here in Newcomb we get red/purple trillium and painted trillium, but not this lovely white one. According to the literature, this flower starts off white and slowly turns pink as it ages. These were blooming in gentle profusion around the woodland floor. A nice treat! 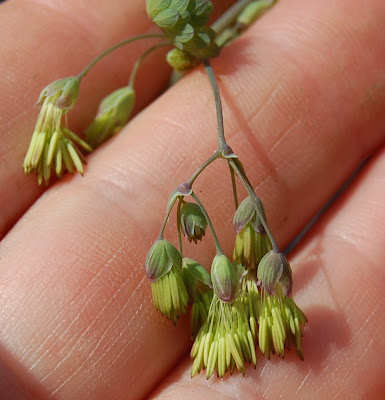 Early Meadow Rue (Thalictrum dioicum) - rues have such lovely scalloped/lobed leaves that are easily identified, but check out these splendid flowers! Each of those dangly bits are the stamens, the anther being the fat bit at the end. The stamens dangle like so much fringe, reminding me strongly of a belt my mom had in the '70s.

Amercan Beech (Fagus grandifolia) - While our beeches in Newcomb are still clinging to the past, here in Saratoga the new leaves were juuust starting to erupt. How beautiful they are up close, eh? 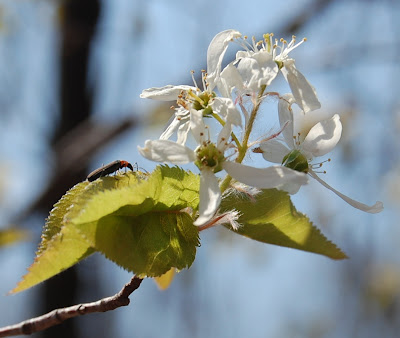 Shadbush (Amalanchier sp.) - there are so many varieties of shadbush/serviceberry/shadblow (pick your name) that in college we just lumped them all together as Amalanchier sp. - a good collective name. As you can see, the shad is in full bloom down below. I'll give it another couple weeks up here. The names come from folklore: shadbush/shadblow referred to the coincidence that this tree came into bloom as the shad were running (shad are a large fish that lives in the Hudson - it's fisheries are not doing well these days - commercial fishing has overtaxed the native stock and it is in decline); serviceberry refers to a more solemn event - when the tree came into bloom the ground was soft enough to bury those who passed away during the winter. 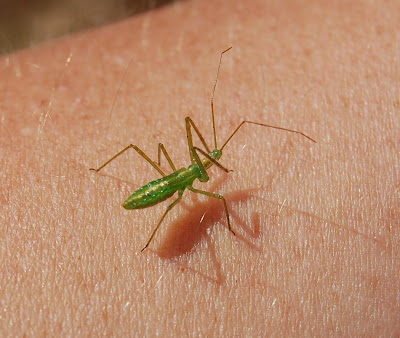 Insects abounded. While flowers were our main target, some insects joined the photo shoot. I have no idea what this is, but it looks freshly emerged. It had bright red eyes, too. We saw giant bumblebees, assorted flies, and I even picked up my first tick of the season - luckily a wood tick, not a deer tick.
I'll post some more photos from this trip another day - don't want to use up all my good stuff at once!
Posted by Ellen Rathbone at 10:40 AM