When I was a little girl, I used to love to go up in the attic at my grandparents' and great-grandparents' house in Gloversville. It was a mostly finished attic in an old house. It had a full floor, windows, and actual rooms. One of these rooms was a bedroom my sister and I sometimes used when visiting (it was hotter than a skunk in the summer). But the real joy of this attic was the "Civil War Stuff."

Now, David Getman was the key figure in most of the stories associated with The Stuff. He was a soldier in the Civil War, and had been captured by the South and sent to Libby Prison. It's my understanding that Libby Prison was known as one of the worst prisons during this war. Few folks got out alive. Long story short, David escaped. I recall tales of him escaping on the underside of a railroad train, but my mother's recollections are that he was being transported with a bunch of other prisoners and escaped from the boxcar and hid out in the woods. I remember tales of hiding in swamps and such. The clothes he returned in were pretty tattered by the time he got home.

Anywho, there in the attic used to be not only David Getman's uniform and sword, but also a trunk full of ledgers. I remember sitting in the attic reading through these ledgers. It wasn't gripping reading, but it was history: lists of soldiers' names, their height (none were very tall), the color of their hair and eyes, their rank and I think also their wages, but I wouldn't swear to that. The ledgers and David's sword reside with my mother's cousin.

The same cousin had, at one time, a whole bunch of letters written by and to David Getman. Apparently the man, in his youth, was a bit of a rogue and a cad, as evidenced by the content of some of these letters. At one point this cousin loaned the letters back to my great-grandmother, and they subsequently vanished. Another piece of history lost.

However, there was another trunk, made of red-painted wicker, that contained a bunch of old clothes. When my grandparents downsized to a much smaller house (I miss that old house on Oxford Terrace), I luckily inherited this trunk. I love history and having this tie to history is wonderful - I can touch stuff that is over a hundred years old (not old by world history standards, of course, but in American history, it's old). And the late-1800s seem sooo long ago, what with all the technology we have today.

Anyway, as I age, I know that I cannot take care of these old clothes in the way they should be cared for. They are really in pretty good condition and should be in a museum. So, I've contacted the Adirondack Museum to see if they might be interested. After all, these are from folks who lived in Mayfield, Northville, and Gloversville - the foothills of the Adirondacks.

And just because I love to share stuff, I thought I'd share not only the little history about these things that I remember, but also photos of the best pieces.

This first is the best of the best. It's a woman's dress made from blue and brown striped fabrics. This is the back of the dress. The portion that sits over the wearer's lower back has a LOT of fabric gathered in very small pleats. I imagine this was the bustle. There isn't a big, fancy bustle on the back, but being somewhat familiar with old undergarments (more from the Middle Ages than the Civil War, though), I know women used to wear all sorts of strange things under their clothes to make them poof in particular areas (farthingales have got to be some of the strangest of these things). I'm guessing here, but I suspect there was some sort of "bump" on the bum that made a bulge here, over which this pleated area lay and gave the woman that Edwardian glamor-girl look. The bottom of the skirt is all ruched. Here's we have a terrible view of the front of the dress. I'll try to get better photos, perhaps out in the sun this afternoon. It has a blue ribbon tied in a bow it the front - the ends of which hang down to the ground. When I was in, oh, junior high school maybe, I put this dress on. Have photos of it somewhere. It fit beautifully...except for the ribs. Couldn't close the top completely. Ah, corsets...so glad I never had to wear one of those! 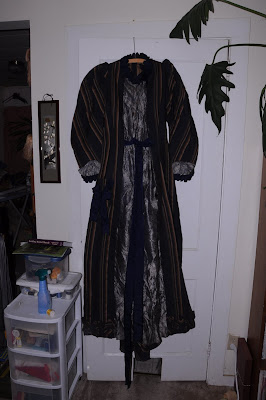 Here's a close-up of the lighter material, and the ruching on the sleeve. What workmanship! 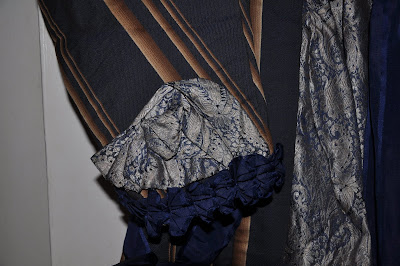 I don't know the history of this blue shirt, but I think it belonged to my paternal grandmother (I had a trunk full of clothes from her youth, too, although most of them have been passed along to one of my cousins). It is very small - the woman who wore it must've had a heck of a corset! 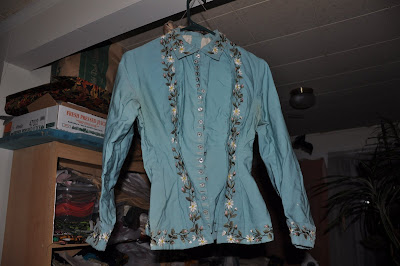 Can you imagine buttoning up all these buttons! I counted 29 - but there could be 30 (would make more sense than 29, wouldn't it?). 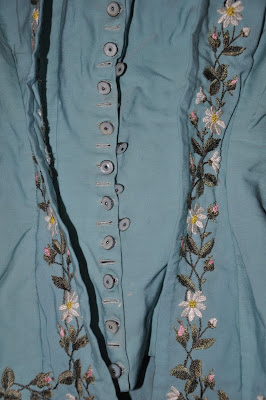 The embroidery is lovely. I can't tell, though, if it is done by hand or machine. If this is turn-of-the-century, I'd think it would be hand-sewn, but machines were doing amazing things by then, so maybe it's machine work. I'll have to look more closely. Maybe Hallie, from the Museum (who will be viewing these this afternoon) will have an idea. 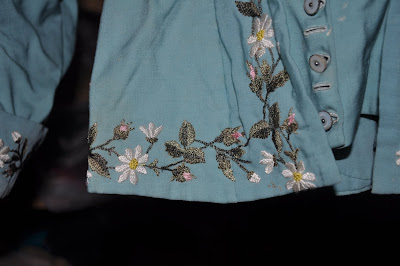 My mom believes this white dress (and the accompanying coat, which is four shots further down) was my great-grandmother's graduation dress. Josephine Sowle. She was born 4 July 1894. She became a school teacher in Hageman (apparently for just one year), and then at age 19 (1913) married my great-grandfather, Edward Curran Brown. 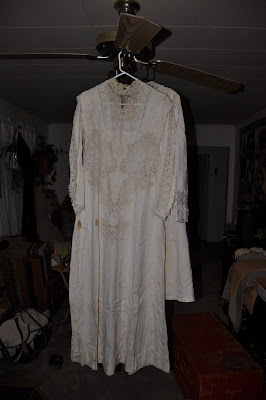 Here is the detail on the sleeve. Wonderful lace work. 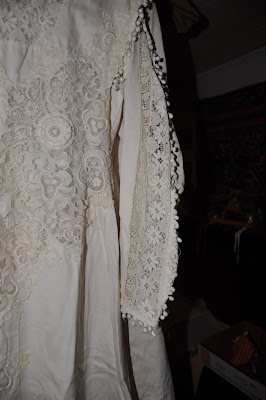 The bottom of the dress, which is a heavy material, possibly cotton, has these buttons on it. It brings to mind photos taken at various Adirondack Camps or Hotels in the early 1900s, when the women all wore white in the summer. 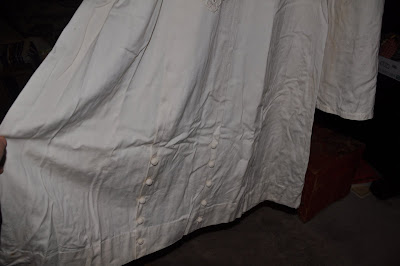 Here's the matching coat. Also a heavy material, with the same lace work on the front 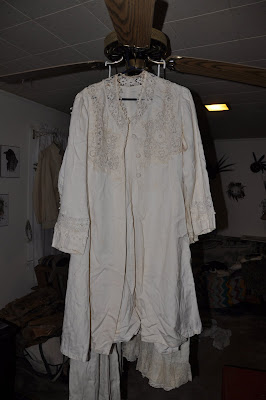 This combo is a thin white shift, which might have been an underdress or slip, except for the little bolero type jacket that goes with it. The dress is sleeveless. 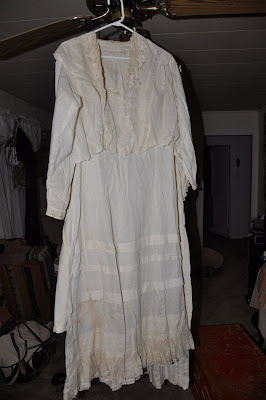 Here's a close-up of the little jacket. I have photos of the dress, but the stains, which don't really show in truth, are really brown in the photos, thanks, no doubt, to the flash. I'll try to retake pics in the sunlight. 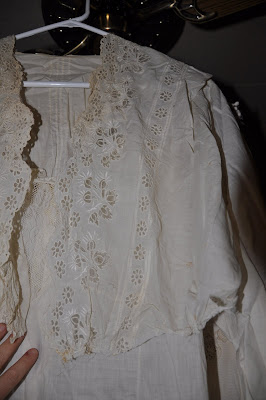 Other items in the chest include a LOT of gloves, two pairs of black stockings, two sets of glasses, a couple hats, lots of "costume" jewelry, a couple pairs of men's breeches, one of which has the type of button fly in the front that one sees in drawings from the Revolutionary War period. Could these be the ones David Getman wore when he escaped from Libbey Prison? Highly unlikely - these are pretty clean and whole. The family had the tattered pants at one point, but they,too, have gone missing. There's also a box full of ostrich feathers - no doubt a leftover from the millinery trade when feathers (and entire birds) were all the rage on women's hats.

As an aside, I also have several of David Getman's books. The two that stick out in my mind are Solomon Northup's "Twelve Years a Slave" (first edition), and the History of the Great War (about the Civil War; also probably a first edition). These I'll be hanging on to.

Posted by Ellen Rathbone at 9:35 AM