I know...you all have been waiting with bated breath for details about the arboretum I visited on Monday. Your wait is over.

Viles Arboretum, located in Augusta, Maine, is a 224 acre oasis of fields and forest that provide a welcome respite for residents and wildlife alike.

Originally the site of the State Hospital (1835-1905), its lands were used extensively for agriculture. Much of the hospital's food was grown here - pigs were a mainstay, and psychiatric patients were each responsible for an acre of land. Over time the farm grew to about 600 acres - not something we see at state hospitals any more. Pity - more institutions should be responsible for producing their own food. The clients would eat better, and they'd get some good exercise and fresh air (where appropriate).

Anyway, the Maine Forest Service started working on this plot of land in 1981, converting it into the Pine Tree State Arboretum. Trails were built, tree collections were planted. In 1990 it became a private, not-for-profit entity. 1991 saw certification as a Demonstration Tree Farm, and 1992 saw the addition of a hosta collection.

Today the arboretum, now known as the Viles Arboretum, is working to bring its mission and image into the 21st century. They hope to resurrect their American Chestnut project (working to improve the genetic stock of the chestnut tree and ultimately make this species a survivor in the US once more). They've added an heirloom apple orchard, and have a green ash collection that may come in useful as the emerald ash borer makes its inexorable way into the Northeast.

I arrived at the arboretum a couple hours early for my interview, so I took a walk around the trails. It was a terribly hot and humid day, although a nice breeze was starting to blow up. Here are some views from along the trails.

First up, we have a look at the Urban Forestry collection. There were maybe a dozen trees here, several of which were oaks. Urban forestry may seem like a contradiction of terms to many folks, but in truth, cities are often full of trees. Collections like this can demonstrate which species are better suited for urban settings. Some traits to take into account are how tall a tree can grow (some streets might do well with tall, majestic trees, while other locations would be better served with shorter species); what kind of root system it has (deep or shallow; water-seeking or drought tolerant); does it produce fruit, and if so, how much (in some areas, fruit or mast-producing trees might be unwelcome, especially if the wildlife attracted to this food source deface personal and public property; in other locations, attracting wildlife may be a real plus). 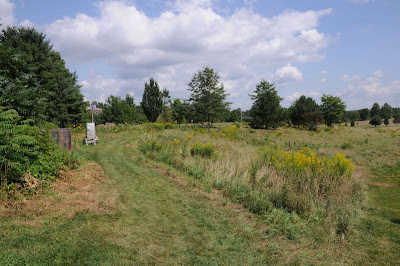 Next I came across their Conifer Collection. It was so hot in the field that I opted not to walk over to check out which species were here, although from a distance I think it is safe to say spruces and firs predominate. I was eager to see some of the historical artifacts that remain on the property, so I sought on the site of the piggery. There isn't much left today - some metal rods emerging from the tall grasses and goldenrods. 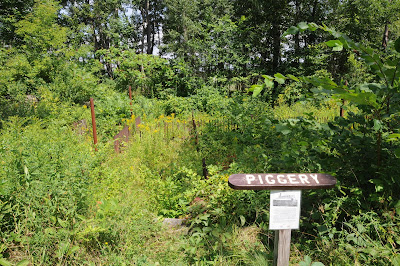 A delightful little pond made a welcome sight. Dragonflies galore skimmed the water and patrolled the vegetation. 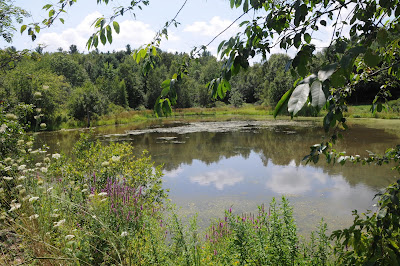 I loved this rustic bridge. 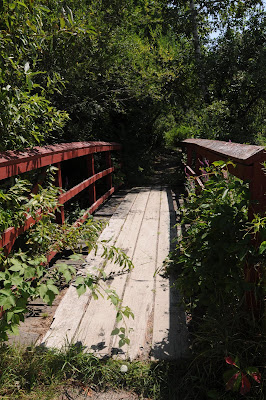 Eventually I came across the Rock Garden. This is one of two stunning garden collections on the property. Tended by local master gardeners, it is easy to see that they love what they do. 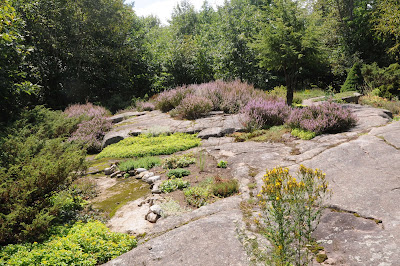 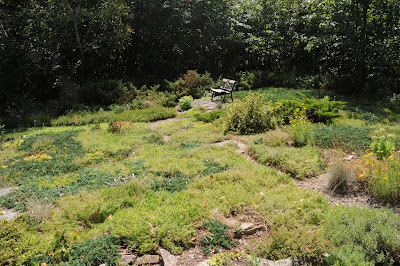 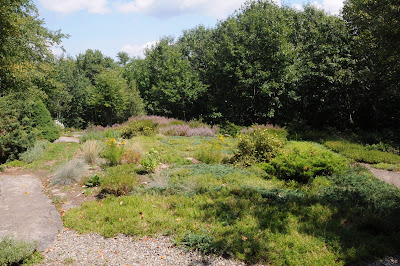 The other garden of note is the Hosta Collection. 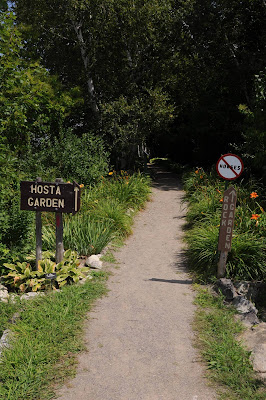 Located along either side of a wooded path, it is delightful to the eye. 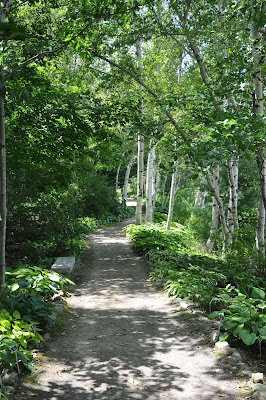 I don't know how many species they have, but it is an impressive amount. 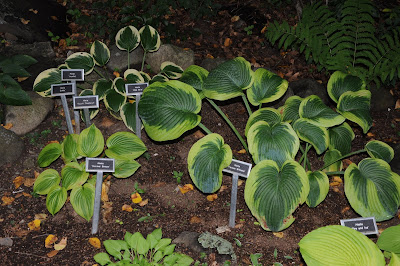 Not only do the plants line the path, but some have been cleverly arranged around the rocks in the woods. 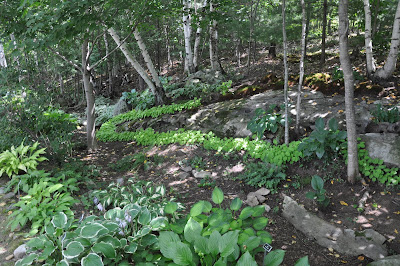 You can't tell from this photo, but that light green specimen in the back has leaves that are half again the size of a human head. They were HUGE! 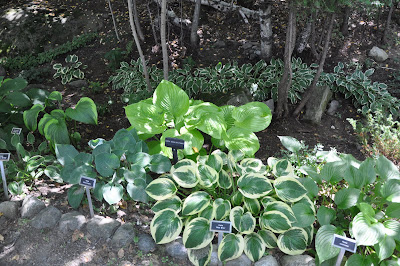 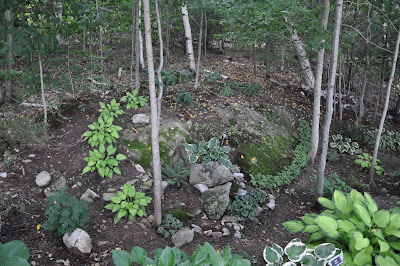 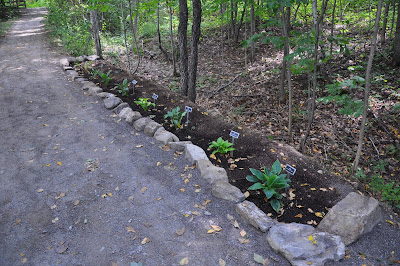 I'm not necessarily a huge hosta fan, but some of these plants caught my eye, like this "Americana." 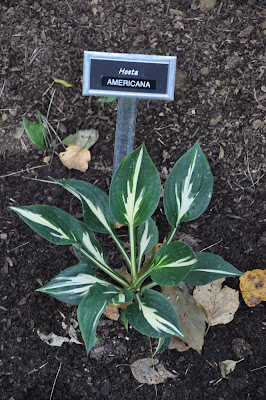 Back in the fields, I came across the heritage apple orchard. These are young trees, which are too young to produce fruit yet. 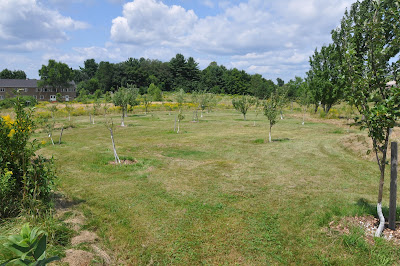 I was curious to see what varieties they had, so I went in search of labels. The one below is a Black Oxford. Sound familiar? This is the very same variety that I had to cut down in my yard earlier this year due to fire blight.

The white paint you see on the lower trunks of these trees is a practice advocated by some growers to help control damage by apple borers (remember the round-headed apple borer I found a couple months ago?). I believe the thought is that the layer of paint can either deter the insect, or it makes the telltale signs of infestation (sawdust) easier to detect, thereby making immediate treatment (a wire into the hole to skewer the larva) possible. 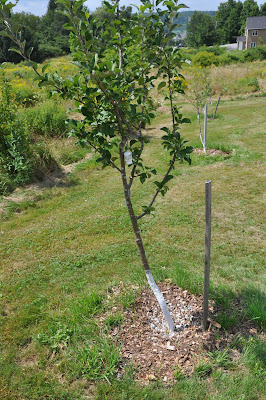 This arboretum has a lot of potential. As collections grow, and science is brought back into the mission, school groups and the general public can learn about the importance of trees, a major source of income and pride in Maine, and discover how often their lives are tied to the success of our forests.

If you live in Maine, or are just visiting, I recommend a visit to the Viles Arboretum. Bring your binoculars - there is pretty good birding here, too.
Posted by Ellen Rathbone at 12:07 PM