On the Road Again

Friday morning dawned...sort of. The sky did appear a shade lighter at 7:00 AM than it was at 5:00 AM, but not a whole lot. I had a long day of driving ahead of me, and the heavy clouds overhead did not bode well. In fact, SNOW was in the forecast.

Still, I had a mission: I was off to Michigan for a job interview.

Now, you wouldn't think there'd be a lot in common between the Adirondacks and Michigan, but there's one thing that was constant in NY, OH, PA, MI and even here in Canada, where I am tonight, and that is road construction.

The first delay from construction was right at the edge of the Park, near Forestport. They are rebuilding the road. Even Santa got into the swing of things. 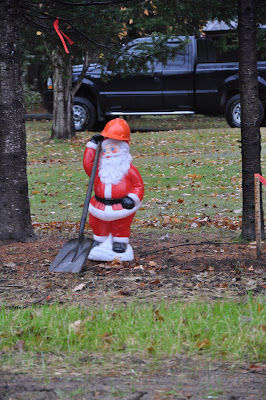 Fortunately, I avoided the snow. All I had to deal with was rain, and more rain. It was a long haul across NY, even on the Thruway. When I crossed into Pennsylvania, however, the clouds started to thin, and I got my first glimpse of one of the Great Lakes - Lake Erie. Those are grape vines in the foreground, by the way. 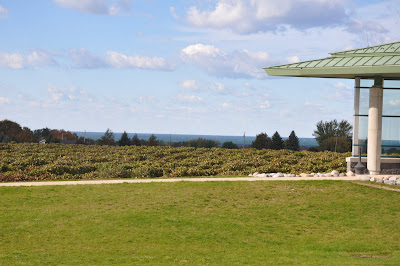 The Lake was most impressive as I creeped through Cleveland during rush hour that evening. The wind had really picked up and was throwing large waves against the brakewaters, tossing spray into the air as impressive as some I've seen at the ocean. However, driving in rush hour traffic does not lend itself well to admiring the view, no matter how spectacular it was. Photography was definitely out.

I made it as far as Toledo, Ohio the first day. Twelve and a half hours on the road. I was ready for a good night's sleep.

Morning came with a slow sunrise. I was still headed westward, but the early morning light sure lit up the countryside beautifully. 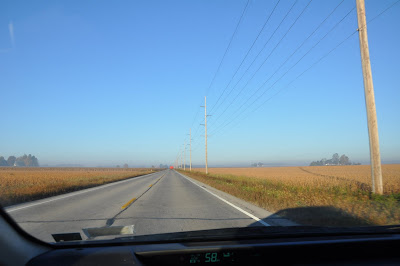 There are so many beautiful barns in Ohio. I only captured one with the camera, though. 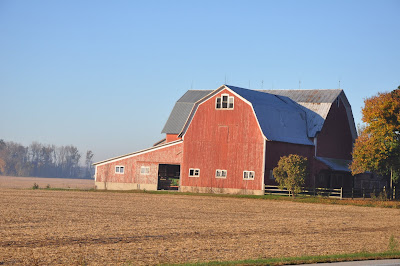 This was my destination, the Dahlem Conservancy - a combination nature center, environmental education center, and land conservancy outfit. I was being interviewed for Education Director later in the afternoon, so I had the morning to explore the trails. 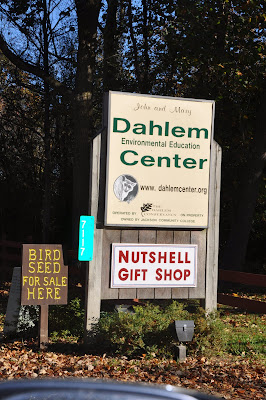 The walkway leading toward the building is lined with lovely gardens that have been put together by master gardeners, and it shows! Even in mid-October they are quite stunning. 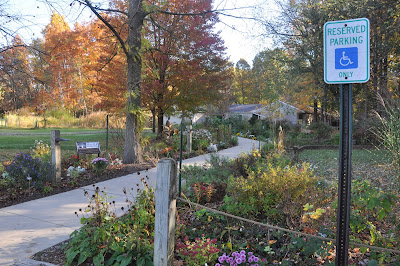 A special needs trail goes through the woods right around the building. What a beautiful day it was - a nicer one couldn't have been planned if a direct order was placed with the weather gods. 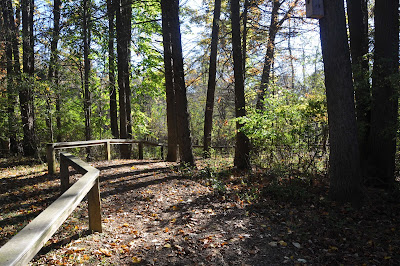 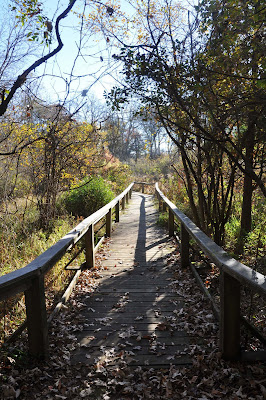 A wild cucumber had creeped over the railing of the boardwalk. 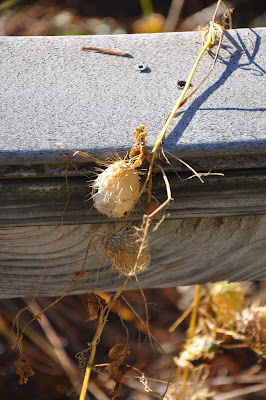 The morning air was filled with birdsong, many of which I recognized (chickadees, juncos, nuthatches). I was delighted to spot this female cardinal in the shrubbery. 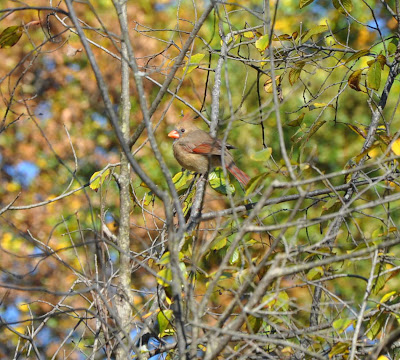 What joy to see sasafrass, and tulip poplar - old friends I don't encounter in the central Adirondacks. 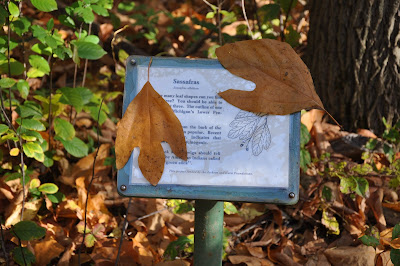 This shadow was so sharp that it stood out from over fifty feet away. 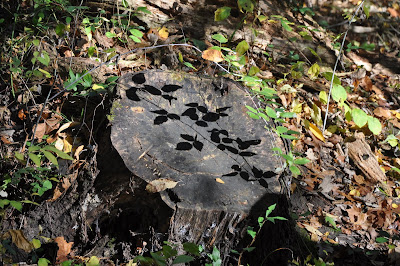 The property at Dahlem showcases several habitats. I'd passed through some forested habitats, some wetlands, and could see on the edge, here, some farm fields. Two sandhill cranes flew overhead - the third pair I had seen this morning. What a wonderful sight! 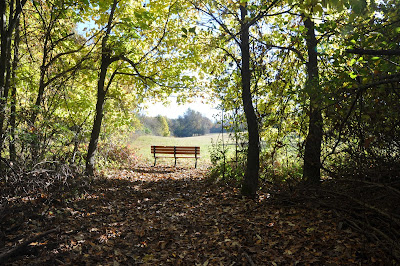 I confess I did not recognize all the vegetation. Could this be privet? I'll have to dig out my field guides when I get back home. 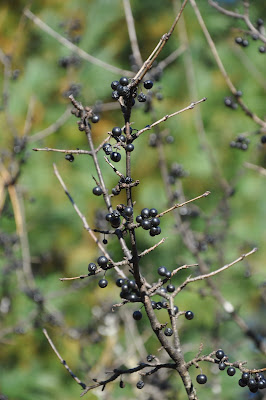 Along the edge of the woods to the west is a fair-sized field, some of which is restored prairie. 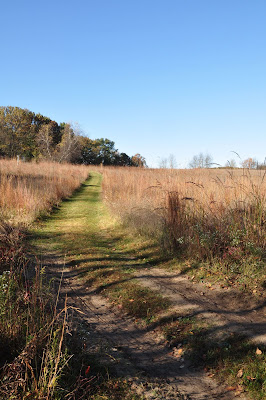 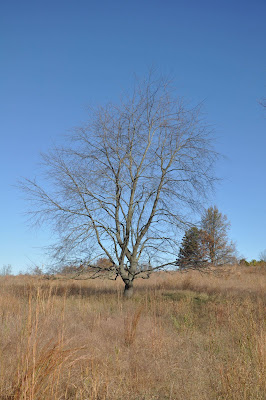 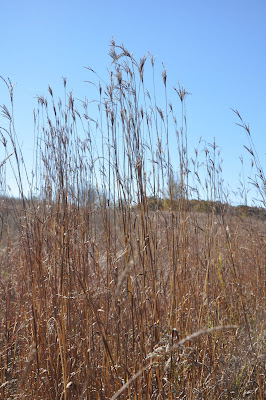 At least two ponds dot the property. One had a muskrat lodge in it, while the other was surrounded by lots of animal tracks. 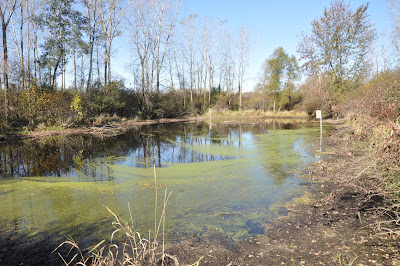 Could these be bidens? Again, I'll have to get out my Newcomb's when I get home. 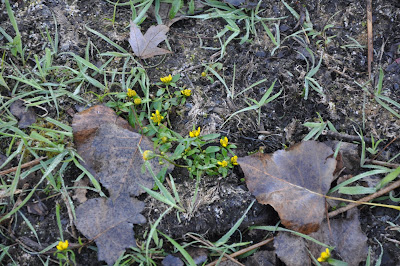 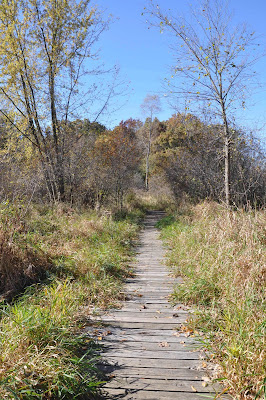 In addition to the two cranes that winged overhead, I saw a Cooper's hawk buzz through the woods, and watched several turkey vultures soar over the field, which were briefly accompanied by a red-tailed hawk. 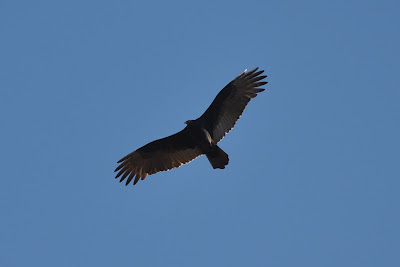 As I returned to the building, I saw this large collection of branches. It was roughly nest-shaped. Upon closer inspection, I saw a white plastic egg inside. Hm. It turns out that this "eagle's nest" was created by some volunteers. Apparently the area's first real eagle nest was built this last year. 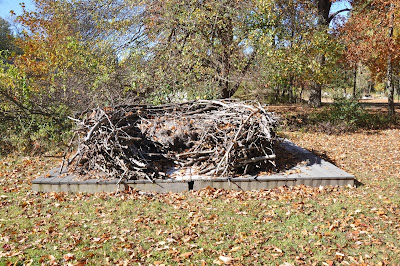 One of the Dahlem staff told me that after my interview I should head over to the local Audubon sanctuary to watch the cranes come in to their evening roost. I took him up on his advice, and after a very tasty meal at Bob Evans, I went in search of the sanctuary. Lots of road construction and a detour later, I found the place. The parking lot was hopping! 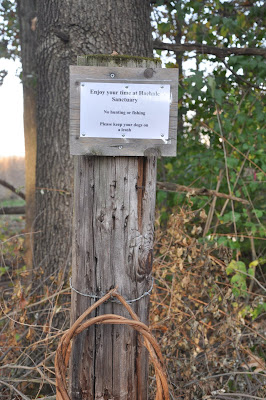 A mowed path takes visitors to a couple different viewing spots above (a loose term - there isn't a whole lot of elevation here) Mud Lake. This is one of two roosting spots for the cranes in the sanctuary. I got there about 5:30 and already the birds were coming in. 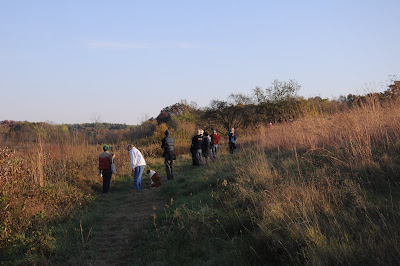 Of course, while waiting for the birds to fly over, I took in some of the vegetation. I have no idea what this plant is, but there were quite a few of them. Jackie - you're from MI - do you have any idea what this is? 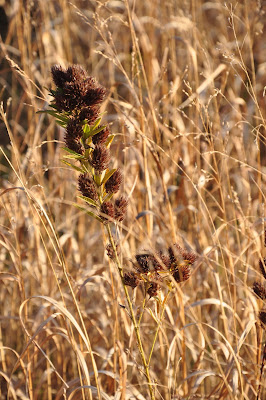 The main attraction, of course, was the cranes. These are sandhill cranes, although there was a whooping crane out in the water (and I did catch a glimpse of him). The birds flew in in groups of two to, oh, maybe twenty. 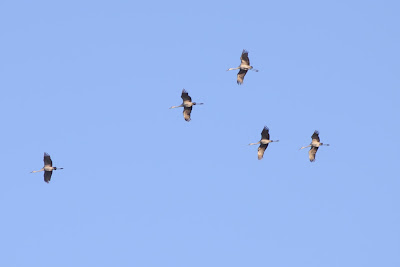 I took a LOT of photos, but I'll spare you the repetition and just post the best.

As the sun was nearing the horizon, larger flocks began to arrive. 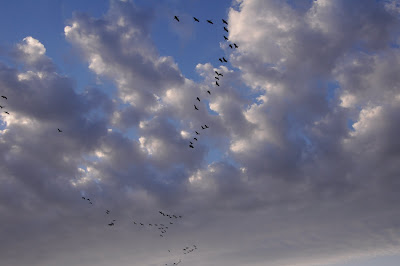 I would have liked to have stayed for the big show, but I wanted to reach the Canadian border before I called it quits for the night, so I had to leave. 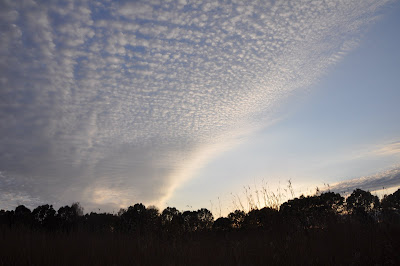 It was quite dark by the time I got back on the highway and headed north and east. The traffic was horrific - what were all these people doing out driving on a Saturday night!?!? I was relieved to finally reach Port Huron, on the Canadian border, where I'd planned to spend the night. Who knew there would be some sort of youth hockey event going on, with all the little dears and their families taking up EVERY SINGLE ROOM in every single hotel?!? I suggested that since the kids are small they could stack them up like cord wood in the rooms, leaving space for the rest of us weary travelers, but no one would take me up on it. So, I got out my passport and crossed the border. I'm now somewhere in Canada - I have no idea where. It's the first place I could find a room.

Tomorrow I'll see if I can find a map.
Posted by Ellen Rathbone at 11:30 PM