It was well after dark last night when Toby and I headed out for our last stroll of the day. The rain had let up, and stars were even starting to peek out, so we took one of our longer walks down toward the golf course. On the way back home, I caught sight of something in the road. By golly, it was a spotted salamander (Ambystoma maculatum)!

The only salamanders I've routinely seen up here are red-backeds and red efts, the latter being the terrestrial stage of the red-spotted newt.

Spotted salamanders are not readily spotted (no pun intended). This is because they are a type of salamander known as a mole salamander. Mole salamanders, as you might imagine, spend a large part of their life underground. They are most readily seen in the spring when they head for ponds in order to create new spotted salamanders for the future. So, you can imagine my surprise at finding one slowing inching its way across the road on a chilly (but damp) night in late October.

We were still about a half mile from home, but I reached down and patted the ground the get a coating of water on my hand before picking the critter up. I simply had to take it home for a photo session! At first it sat coldly in my hand, but soon it began to warm up. As it did, it started to object to its captivity. It wiggled and squirmed, poked its rounded snout between my fingers, and even managed to crawl part way up my sleeve. I was concerned it might begin to dry out, so I added some wet leaves to my hand and picked up the pace.

Once back home, I plucked some rain-drenched grass and hurried inside. An empty salad container would make the perfect temporary home. While my camera was nearby on the table, my macro lens was out in the car. We've had several cold nights and chilly days lately, and yesterday I had a fire going in the wood stove. You can imagine what happened when I brought the lens inside and attempted to use it. 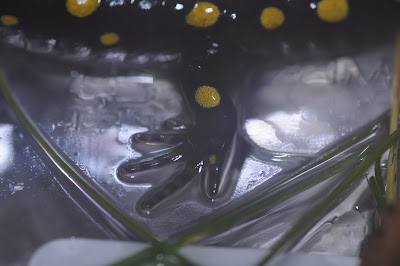 Yep - it was all fogged up. I tried to wipe it off, even used a hair drier on a low setting, but to no avail. Things were too damp for it to be usable.

So, I had to make do with my regular lens.

One of the characteristics of this salamander that I wanted to point out is the laterally flattened tail (see below). This tail acts as a rudder when the animal is in the water. Like some lizards, the spotted salamander can "drop" its tail in order to escape from predators. I imagine the wiggling appendage is a pretty good distraction while the rest of the animal beats a hasty retreat. 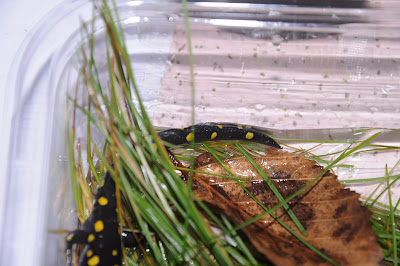 Mostly, however, spotted salamanders are woodland creatures, living out their lives underground in hardwood forests. The only times they leave their protective tunnels is to go out at night to hunt, or to seek ponds on rainy nights in the spring to breed. This fellow must've been out looking for an early evening snack. 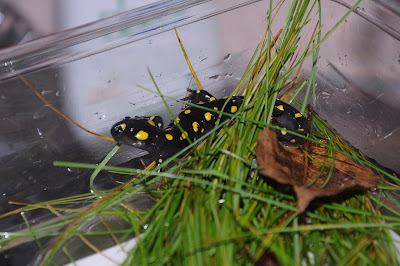 Now here's something pretty cool about this large salamander (which can reach almost eight inches in length): its eggs have a symbiotic relationship with a green alga (Oophilia amblystomatis; aka: the salamander alga).

Like many amphibian eggs, the eggs of the spotted salamander are protected by a jelly-like coating which prevents dehydration. However, this protective jacket also limits the amount of oxygen that can reach the developing embryo. Enter the alga. As a green plant, the alga photosynthesizes, and we all know from basic biology that a by-product of photosynthesis is oxygen. Voila! The embryo now has plenty of O2 to get it through to hatching. And all the CO2 produced by the developing embryo is likewise utilized by the alga to continue its photosynthesis. It's a win-win situation.

This may be hard to believe, but these slimy woodland denizens have been found to live up to 20 years in the wild! And every spring of their adulthood they migrate to the vernal pond where they hatched (kind of like salmon) in order to breed. I'm afraid I might have done in that aspect of this particular salamander's life, for I turned it loose at the edge of the woods in my back yard. I wonder if it will find a new home in this strange patch of woods, and find a new pond next spring in which to breed, or if I have doomed it to an abbreviated existence despite my good intentions. 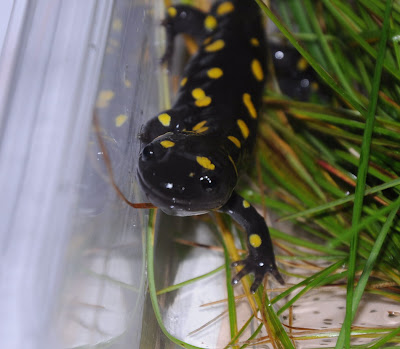 Email ThisBlogThis!Share to TwitterShare to FacebookShare to Pinterest
Labels: salamanders