About 4:00 this afternoon Toby started to get a bit antsy. Can't blame him, cooped up in this tiny abode all day. The day was on again, off again weather-wise. First all grey and cloudy, looking like it might rain at any moment, then blue sky and sunshine, only to turn dark and threatening again within the hour. Sun, clouds, sun, clouds, sun, clouds. All the while, the temperature steadily dropped. We were over 50*F last night, and now we are close to freezing.

We couldn't go out earlier in the day because the handyman was here doing repairs. But by 4:00 the coast was clear. I decided to head over to the Falling Waters Trail.

You might recall that I visited the western terminus of this trail back in November while on my house-hunting trips. That end was in Concord, while today we picked it up on Weatherwax Street (Road?) right here in Jackson. 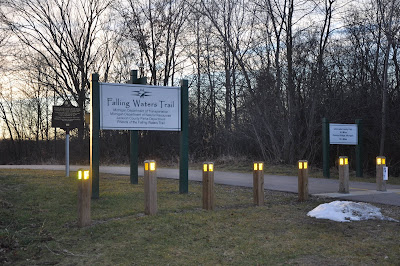 I believe this used to be a railroad bed, which has now been paved and made into a biking/walking/jogging trail. From this end it is over 10 miles to Concord. 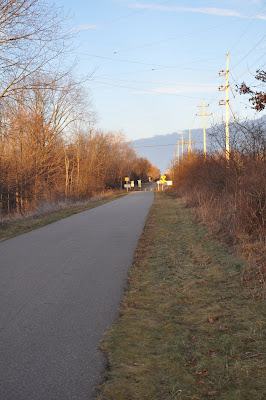 Despite it being about 5 PM, the sun was still up. It's a phenomenon to which I am still adjusting. Michigan is on eastern standard time, but we are at the western edge of the time zone, so the sun rises later in the morning and sets later in the evening. 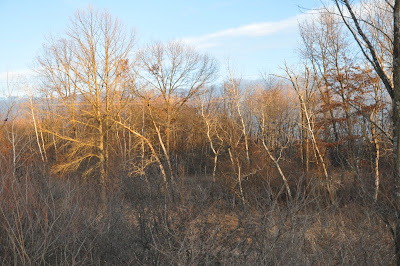 We hadn't gone more than a quarter mile up the trail when I heard a rustling to my left. At first I thought it was the wind rustling the leaves, but even though the wind was blowing quite steadily, the sound didn't match. Then I saw them. Can you? 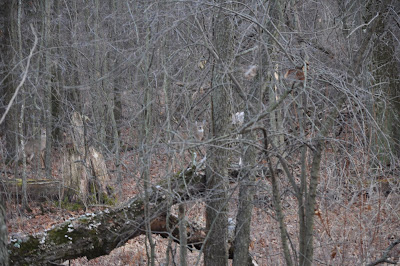 Here is a close-up of the middle of the above photo: 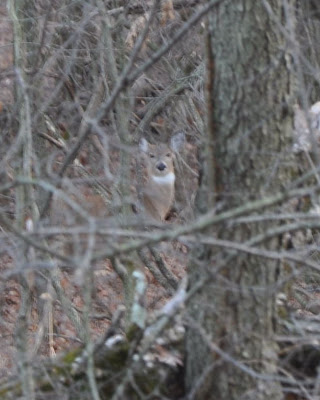 There is a second one just behind this one; take another look at the first photo.


Along the sides of the path there are tangles of vegetation, but also little pockets of wetlands. I think I saw a muskrat lodge in this one. I'll have to come back when the weather is warmer.

Asian bittersweet is quite a problem around here. It's a terribly lovely plant with its decorative fruits, but as a non-native vine, it runs rampant over here, strangling the native vegetation. Even worse, it hybridizes with the native bittersweet, which was never terribly common to begin with. 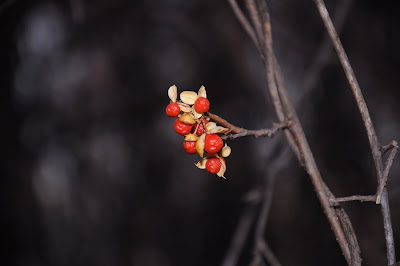 Here you see a good example of how strong the wind was blowing: normally Toby's ears flop downward. 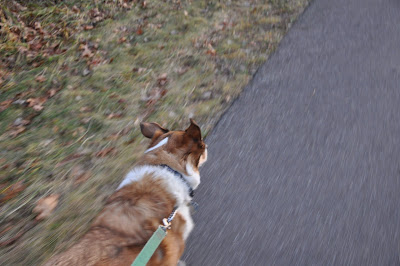 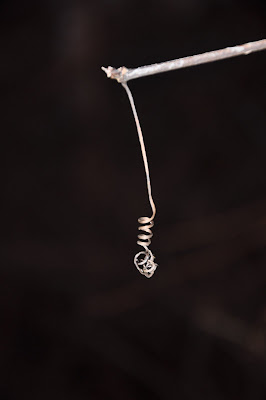 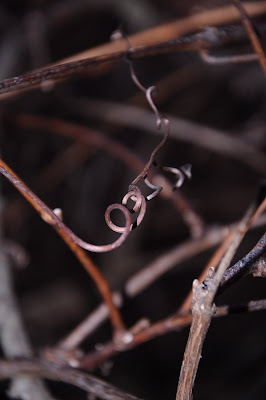 Along the path there are little "side streets" that go out onto private property. Each is very well marked as private - no trespassers welcome. 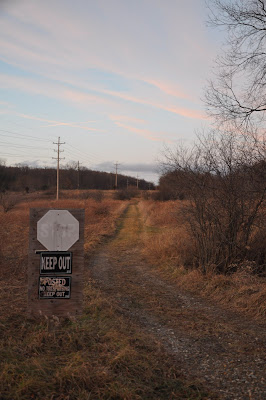 After we went about a mile down the path, I decided it was time to turn back. The sun had set and while the sky was lovely to watch, I wanted to get back to the car before it got too dark. Rush hour is one thing to contend with, but the deer herds are quite out of control here and this was the perfect time of day/night to miss seeing them as they dart out across the roads. 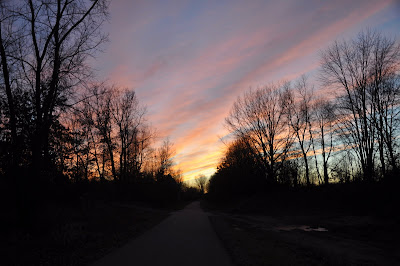 So, the dog and I have completed another preliminary exploration of a nearby trail. It reminds me of the Glen Lake Bike Path back in Glens Falls. I can't wait to see it in its spring and summer glory.
Posted by Ellen Rathbone at 6:06 PM