We have had just a string of glorious days - temps in the '70s, nice breeze, low humidity.  It's been wonderful.
So, of course, Toby and I took a long walk "around the block" Sunday morning.  Lots of things are in bloom, some of which are old friends, and some of which are new ones.
First up we have what I suspect is purple giant hyssop (another case of uncertain ID because I didn't have my field guide in hand on the walk, and photographs don't always do the trick).  I've only seen purple giant hyssop once, so I can't rely on memory.  I will take my book home today, however, and have it on hand for my next foray. Update:  my botany buddy back in NY (who is originally from MI) identified this as hoary vervain (Verbena stricta), which amazingly is is a native plant! 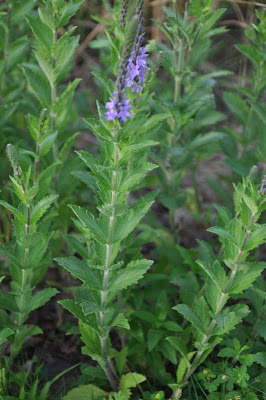 The first flush of yellow goatsbeard has come and gone, 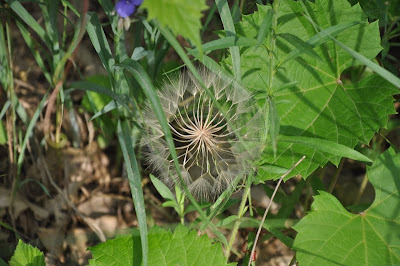 but the next generation is coming in strong. 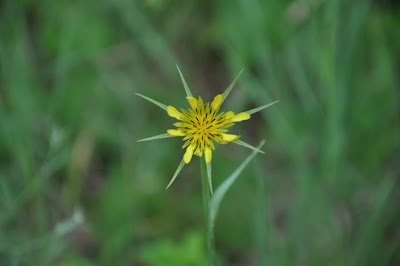 'Tis the season for mullein, and here we have moth mullein, a mullein about which I have heard (it is considered up and coming on the list of bad invasives), but have never seen until moving here to Michigan.  It's been in Michigan since about 1840, so it's hardly a new plant, but these last few years it has been on the list of unwanted alien invaders. 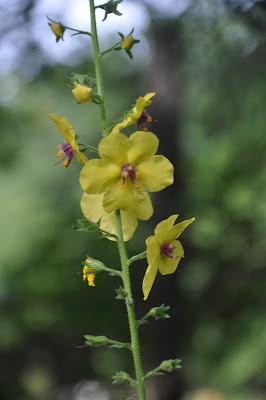 Another non-native, ox-eye daisy has naturalized across much of the country.  We like it, so we don't think of it as an invasive, but, well, there it is.  Sometimes the truth hurts. 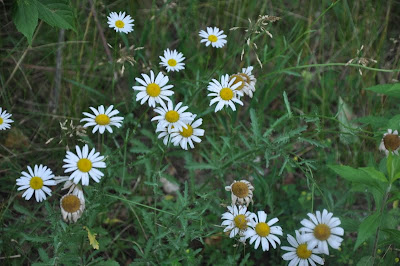 Spiderworts were in full swing in this field.  And they are a native!!!  Happy day.  I am simply tickled pink by these flowers, for I had them planted in my gardens in Newcomb, and it is a joy to discover they are a native wildflower.  I will be trying to gather seeds from the plants in my neighborhood later this season, collecting them for planting in my field after I have it burned.  Local genotypes, don'tcha know. 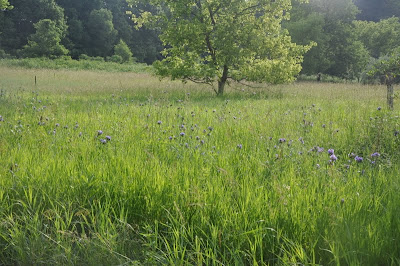 Okay, back to non-natives, we have the first Queen Anne's lace in bloom. 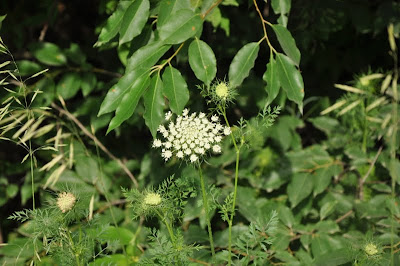 I smelled them before I saw them:  wild roses.  So much nicer than the invasive multiflora rose, and they add such a lovely color to the landscape. 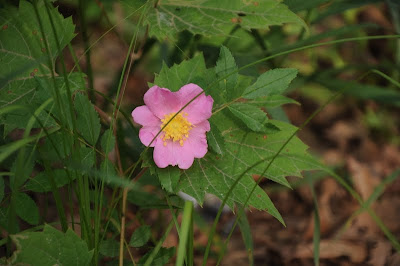 Catalpa trees are in bloom, although they peaked a week or two ago.  The somewhat orchid-like flowers are really quite lovely, and they stand out next to the giant heart-shaped leaves.  Catalpas are not native to Michigan, but they are native to North America.  A more southerly species, they were planted here by early settlers for use as fence posts (after they grew up and were chopped down). 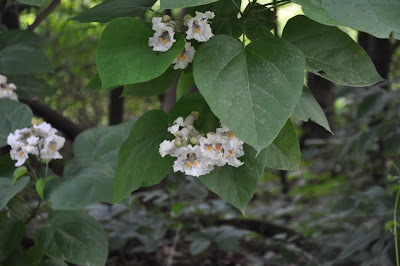 And it is milkweed season.  The flowers are only juuust starting to bloom, and soon the air will be filled with their cloyingly sweet scent. 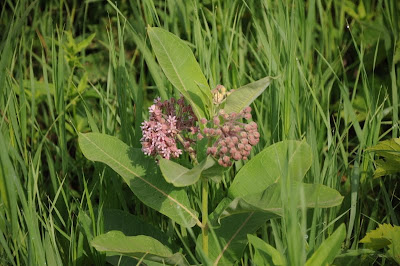 Butterflyweed, a member of the milkweed family, is also just starting to flower.  Monarch butterflies will utilize both of these plants, so I've begun flipping over leaves in search of eggs and larvae.  So far I've found one caterpillar (another post for another day). 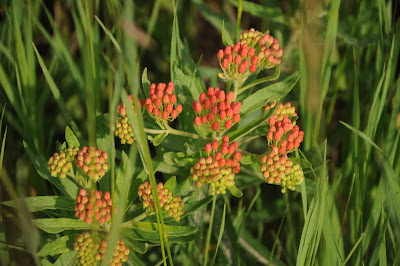 There's one plant that is growing and blooming everywhere, and it is a thistle.  Back in the Adirondacks I was familiar with Canada and bull thistles, both non-native species.  This thistle didn't match either description.  It turns out it's nodding or musk thistle (Carduus nutans).  It is, of course, a non-native species. Here is a series of photos of its flower in different stages of blooming. 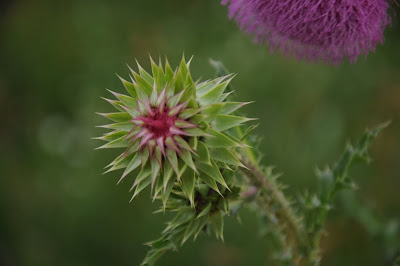 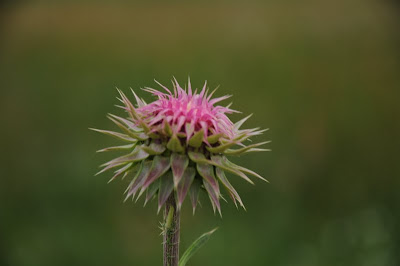 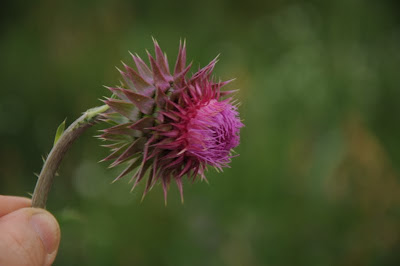 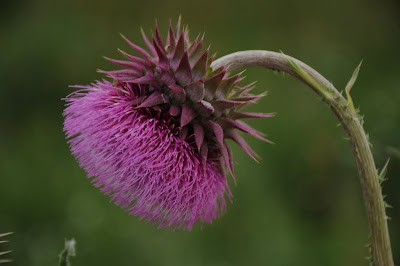 Flowers weren't the only things we saw on our walk.  This striking butterfly posed for quite a while, a welcome change!  An eastern comma (one of the punctuation butterflies), it is a member of the brush-footed clan.  And for those who wonder what good nettles are, here is an animal who needs them:  nettles are one of the host plants for its larvae. 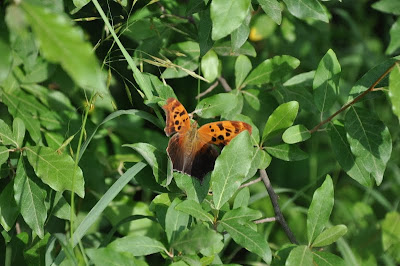 Now, this butterfly I did not see on my walk.  This one was hiding in the shrubbery yesterday as I walked along one of the trails at work with a string of 4th graders behind me.   I believe it is a little wood satyr (Megisto cymela), a fairly common and abundant species that likes open woodlands, which is exactly where I found it. 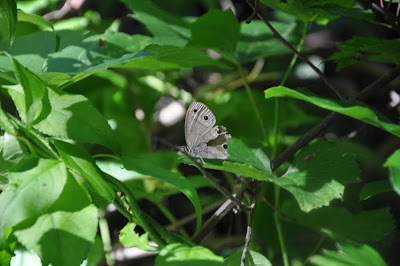 Summer is now in full swing.  I've discovered sassafras growing in tree form (I've only ever seen it as a shrubby thing), smooth sumac growing as full fledged trees (with dbh of 10 or more inches), indigo buntings nesting down the road from me, meadow larks singing in the nearby fields, and whip-poor-wills calling in the fields at night.
This morning I watched a pair of sandhill cranes in a neighbor's hard - one of which was dancing and jumping in front of its companion - either a defensive posture meant to intimidate me and the dog, or a courtship display intended to impress its friend.
And two nights ago, just as I was about to step in to the shower, I saw a brownish blob in the tub.  I wasn't wearing my glasses, so my first thought was that one of the cats had left me a reminder that the litterbox needed changing.  However, as I bent over to get it into focus, it resolved into a grey tree frog!  How in the world a tree frog found its way into my house and tub, I have no idea, but a few moments later it was back outside where it belonged.
Add to all this the hundreds of fireflies that sparkle across the landscape each night, and it is easy to say that this move is turning into a very pleasant path of discovery.
Posted by Ellen Rathbone at 3:45 PM