I had a couple great finds yesterday.  First, on the way home from work, I saw something moving in the road.  As I slowed down my approach, I saw it was a turtle, and not only that, it was a Blanding's turtle. 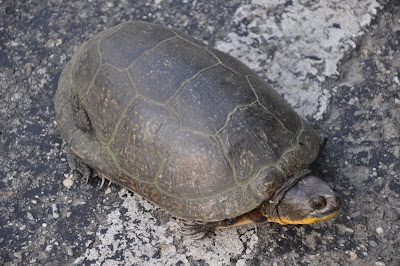 Blanding's turtles are one of Michigan's protected species, coming in at the Special Concern level, meaning there are still a fair number around, but the population is in decline and we need to be extra careful to prevent further decline toward extinction.

Blanding's turtles, named after Dr. Blanding, a friend of the man who "discovered" this animal, are easily recognized by their yellow chins.  They also often look like they are smiling.  The lightly spotted shell is more highly domed than the shells of most of our other turtles (the exception being the box turtle, which has a very high dome).

I of course stopped my car and gave this turtle a lift across the road - and a good thing, too, for a whole line of traffic was soon held up by my actions.  Had I not stopped and grabbed her, this turtle might've joined the ranks of all the turtles permanently napping in the middle of the road.  Please watch where you drive! 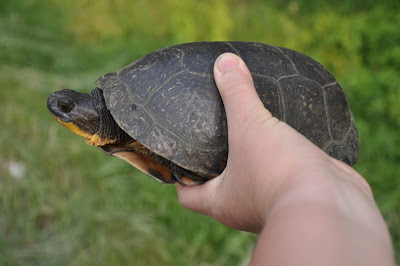 Later on, while Toby and I were on our nightly stroll, I found this Canada darner lying upside-down in the road.  It was still alive, but barely.  The bent abdomen indicated the location of damage; I suspect it had been hit by a car.  If turtles are difficult for people to avoid, imagine trying to avoid colliding with a fast-moving insect! 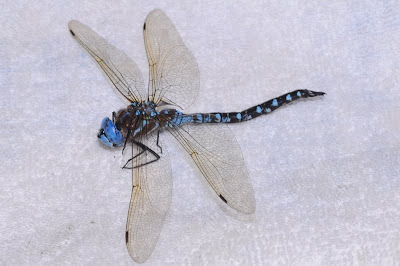 I brought the dragonfly home to photograph, for it isn't often one has a chance to snap shots of a dragonfly up close. 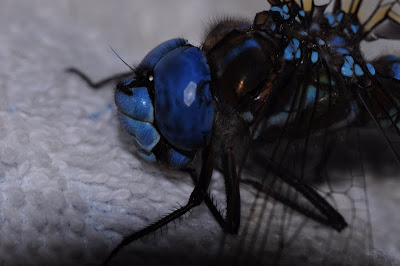 The enormous compound eyes are often the first things that grab our attention, but just in front of those two eyes, there are three smaller ones (called ocelli), about where you might consider the bridge of the nose to be located (if these insects actually had noses).  The large plate on the front of the face (where you'd locate a nose) is called the frons, and the next segement below that, with the two lobes pointing downwards, is the clypeus. The smallest bit at the bottom, which on this individual is the lightest blue, is the location of the actual mouthparts. 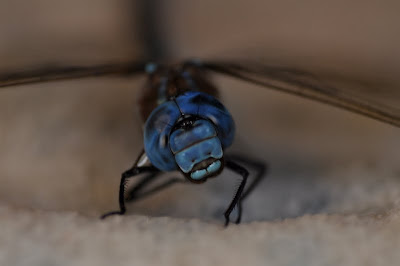 Here are some interesting factoids about dragonfly eyes.  The ocelli are used mostly for detecting light, kind of like the "third eye" some reptiles exhibit.  The compound eyes, however, are built for vision.  They can have upwards of 30,000 facets on each eye.  The eyes wrap around the whole head and each facet faces a different direction.  Each facet of the eyes reacts differently to stimuli, which means dragonflies are extremely sensitive to movement.   No wonder it is so difficult to sneak up on a dragonfly to photograph it! 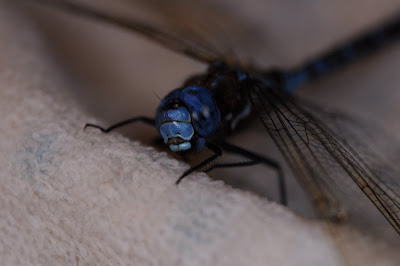 But wait, there's more!  Dragonflies not only are able to detect movement in clear and sharp detail that would be just a blur to you or me, but can also see much more color than you or I.  While you and I can see the usual colors of the spectrum, dragonflies can see in the ultraviolet range, AND they can see the plan of polarization of light.  Scientists believe this helps them navigate and identify bodies of water (pg. 22 of Cynthia Berger's Wild Guide: Dragonflies).

It seems that all this phenomenal vision wasn't enough to help this particular dragonfly avoid a car.  Perhaps yesterday's strong winds also had something to do with it.  A sad ending for such a marvelous creature.
Posted by Ellen Rathbone at 3:52 PM