A hundred plus years ago, one of the big holiday experiences, especially among the gentry, was to go out on Boxing Day and shoot birds (and mammals).  Teams were chosen and the one that came back with the biggest pile of fur and feathers "won."  It was the sport of the time there in the late 1800s.  This, combined with the growing penchant for birds and their various parts on hats, led to the nearly catastrophic decline in many bird species.
It was in 1900 that Frank Chapman, an ornithologist, proposed a new bird sport to replace this holiday tradition:  a Christmas Bird Count.  Teams would go out and look for birds, recording on paper how many they found of each species.  That first year, Christmas 1900, the CBC had a total of 27 participants and logged in over 18,000 birds of 89 species.  The 111th CBC (last year) tallied 2215 areas that had teams out counting birds:  1714 in the USA, 394 in Canada, 107in Latin America, the Caribbean, the Pacific Islands.  How many people?  62,624!  That's a long way from the original 27.  I think Mr. Chapman hit on something.  And how many birds were counted?  61,359,451.  As impressive as that is, it is down over 4 million from the count two years earlier, and that was with more eyes looking and more areas surveyed than in 2009.  Not good.
Well, this year is the 112th annual CBC, and it was my second.  Last year, three days after starting my new job, I headed out with two of my new coworkers to help tally birds around a section of the Waterloo Recreation Area.  This year, I was asked to help out again, so I joined one of my coworkers and one of our volunteers as we drove around a smaller section, hoping to find some birds. 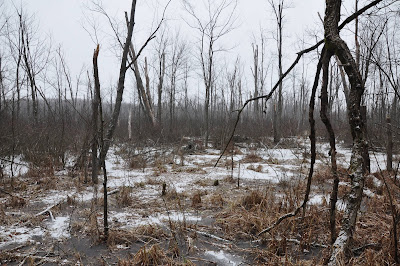 It was a chilly, grey, damp day.  It snowed off and on, but I think that snow really wanted to be rain.  Gary thought the weather would be in our favor, keeping birds low and from flying around.  Well, the birds must've really been keeping low, because we were having a terrible time finding any!  We drove by wetlands... 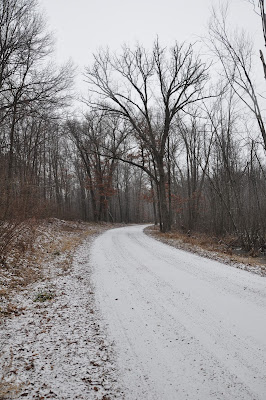 and walked down roads.  Oh, we heard the birds chuttering to themselves, but they just weren't sticking their heads up.

We got out and walked the Hoffman Trail.  This is great habitat for red-headed woodpeckers.  We saw four (last year we had seven).  A couple kingfishers were quite vocal, and one put on a really nice show for us.  The trail out to the wetland, however, was a bit wet - only Gary forged across. 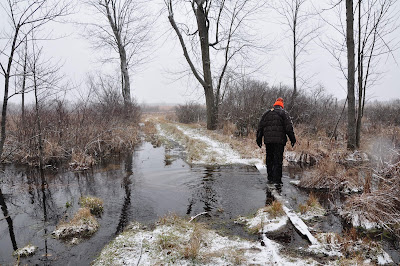 Paul was our official tally-man.  After a while, we began to wonder if we really needed to add another blue jay.  Blue jays were quite numerous - and vocal.  They were elbowed out by mourning doves in  number, though, but this was only because we came across two large flocks of doves snoozing on utility lines. 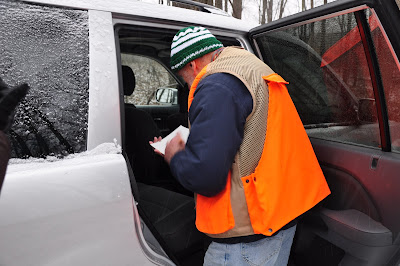 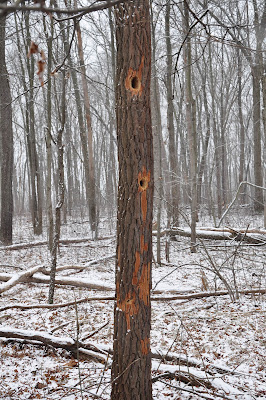 The woodpecker (pileated) was not only drilling for insects, it was flipping off pieces of bark to look for food underneath.  Can you see the horizontal scratch were the beak skidded sideways? 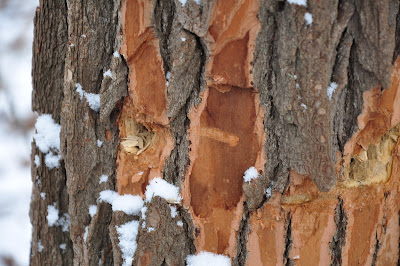 Partway through the day, we headed back to Gary's house for bathrooms and lunch. 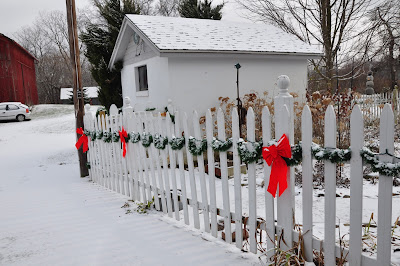 Lucy was there to greet us and make us feel welcome (as was Gary's wife, who had a lovely pot of stew bubbling away on the stove to help us warm up). 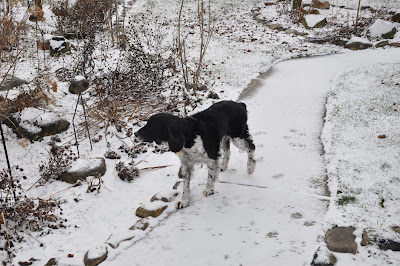 Nancy joined us for the afternoon search.  The temperature remained at the borderline level, and the air remained damp and chilly. 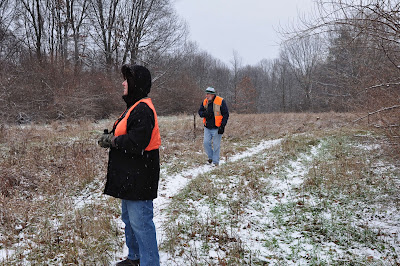 Since the birds were not offering themselves up for photography, I fell back on my usually photographic subjects:  plants.  Here we have a lovely white bush clover with its white snow caps. 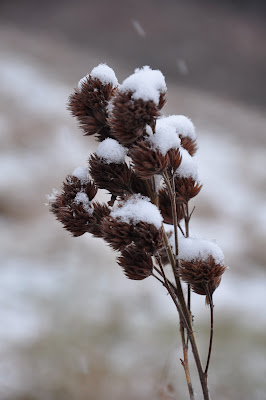 Milkweed looks lovely regardless of the season. 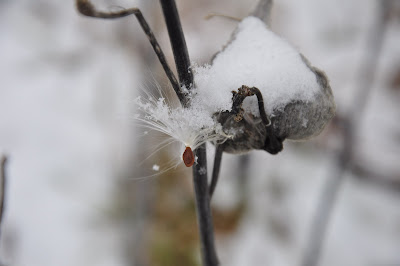 Our final site was this stand of conifers.  Gary was hopeful that we might find some owls roosting here:  short-eared or saw-whet.

We looked around the bases of trees for pellets, and stared at trunks in hopes of finding some "white-wash" - both signs that an owl has been roosting there, but had no luck.  Gary even crawled through some thick brush to peer into low conifer branches, just in case a saw-whet was hunkered down there.  Nada. 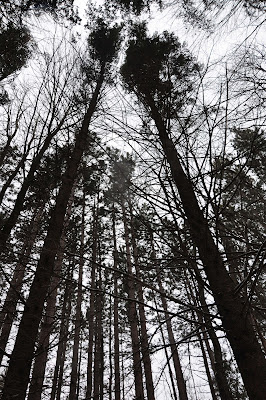 We did find some lovely clubmosses, though.  I haven't seen clubmosses since leaving the Adirondacks.  My clubmoss ID skills are a bit rusty, and I don't have a clubmoss ID book.  I'm hoping my botany buddies will help me out with species here.  I think this might be prince's pine, but I'm not 100% convinced of it. 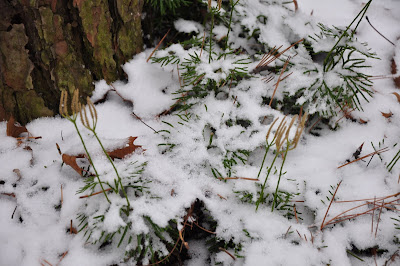 Update:  These are ground cedar.  Which ground cedear, though, I'm not sure.  They could be Lycopodium tristachyum or L. digitatum.  Of course, the details I need to tell them apart are not available in the photographs I took.  I may need to make another trip out here.  (I still don't know about the one climbing the trees, though - it could be the same species, just out for a stretch.) 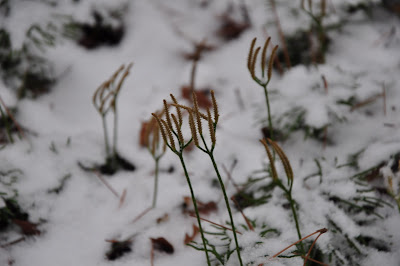 And this one, with the long runners (some of which were actually climbing up the trees) I think is a new one for me.  At least it doesn't look like any of the species we had at the Newcomb VIC. 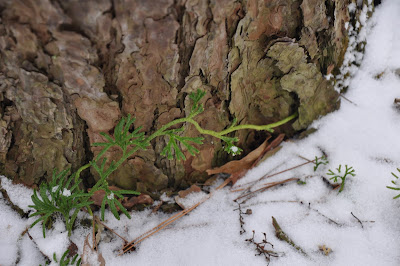 It was nearing 4:00 when we decided to wrap things up.  Our last new birds were kinglets - golden crowned. 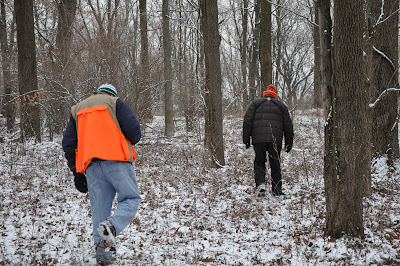 All in all, it was a good day spent outside participating in a one-hundred-plus-year-old tradition.  I haven't seen the tallies yet, but I hear we did pretty well.
Posted by Ellen Rathbone at 5:08 PM