Monday was completely unscripted.  I had to make a trip to Saline, and on the way back home I stopped at the shooting range just up the road from the house.  Do they do archery, or is it only firearms?  Turns out, not only do they have a dinky little archery spot, but they are in the process of building a full-fledged archery range a distance from the firing range.  Huzzah!

So, I have my loaner bow and loaner arrows...all I needed was a bow stringer and ear protection (archery may be silent, but the firing range is RIGHT THERE and it is best to be safe than sorry).  Where to go?  Cabelas, down in Dundee.

I turned the car around and headed to Manchester.  Lots of road work going on there - Route 52 has been under construction for about a year now.  I didn't want to deal with all that, so I decided to hit the back roads.

Now, I didn't really end up lost...I just wasn't completely sure where I was. 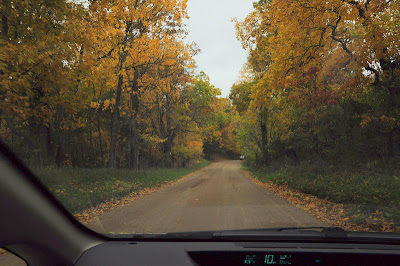 I discovered some really, truly lovely land, though.  Noggles Road - you've gotta love the name!  It is a dirt road, and seems to go on forever.  Both sides were lined with lovely autumnal woodland.  There were even some little pocket wetlands along the way. 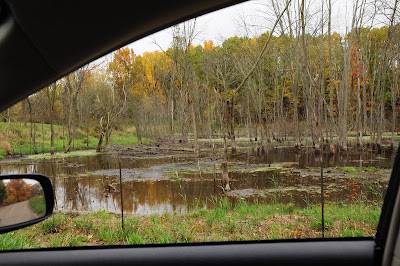 The camera was lurking in the back of the car.  I should've taken it out sooner, for I came around the bend at one point to find a half-dozen full-grown turkeys, beards and all, in the road. 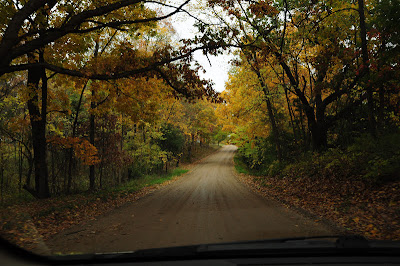 Mostly the drive was wooded, but a few fields zipped by (well, "zipped" is what it looks like in the blurry photo, but in truth I was rarely above 20 mph - bumpy dirt roads do not lend themselves well to speed). 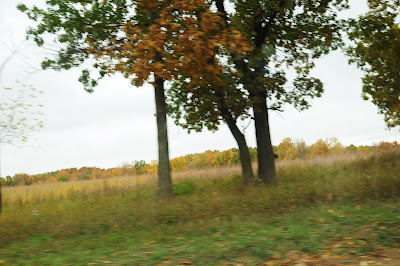 The highlight, after the turkeys, was this hawk coming in for a landing. 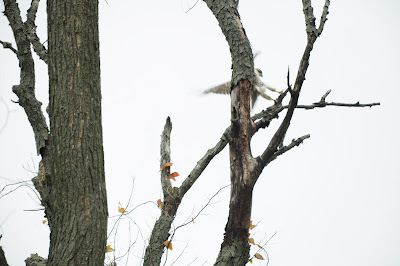 I sort of pulled over to take some shots, but of course suddenly it was Grand Central Station!  I moved the car further off to the side to avoid getting grazed along the side.  The final vehicle to pass was a large, noisy truck, and the bird flew off.  Still, I got enough shots to say I think this is a juvenile red-tailed hawk.  The dark belly band is the biggest clue.  The tail was banded, not a solid russet like we expect on an adult red-tail, which made me think it might be a Cooper's or sharpie, the bird was just too big for either of those.  Looking through the field guide later, I confirmed what I suspected:  juveniles have banded tails. 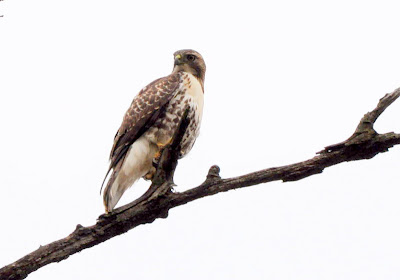 I eventually found my way out of the woods and onto a highway.  But I had such a good time driving Noggles Road that I was sorely tempted to do it again on the way home from Cabela's.  In the end, I stuck to 52 and got caught up in all the constructions...should've followed my whim and headed back into the woods.

I'll be returning to Noggles Road another day - it warrants visits in all seasons.
Posted by Ellen Rathbone at 12:16 PM