When last I wrote, I left you with the sea lamprey. 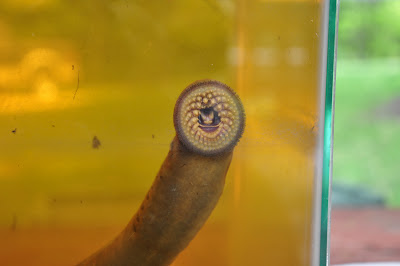 But my second day in the UP was only half over.  Our next destination was Lake Superior at Whitefish Point.  At this point, I had yet to ever see Lake Superior, but there it is: 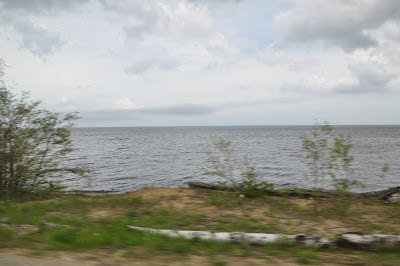 and I can now say I've seen all the Great Lakes.  For the birders in our group, this state park was a destination for checking off more birds from their lists.  With my track record of not seeing the birds, I opted to explore the lighthouse and the Shipwreck Museum instead. 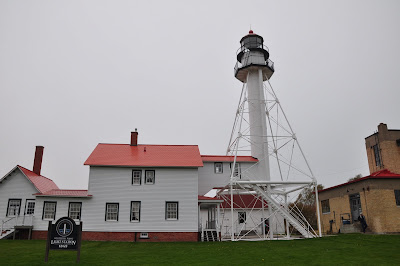 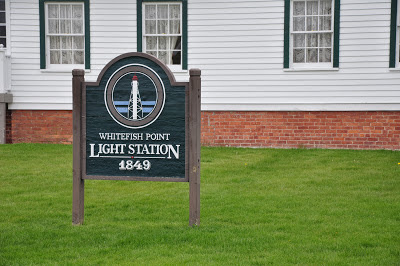 We've all heard Gordon Lightfoot's epic song "The Wreck of the Edmond Fitzgerald," which opens with a line about how Lake Superior if famous for the number of boats and ships it has swallowed up in storms (here is the rudder of one such vessel).  Well, here at the Shipwreck Museum many of them are memorialized. 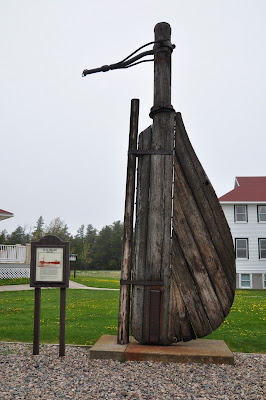 It's a small museum, but very well done.  Here is a view of a lighthouse light - it is enormous. 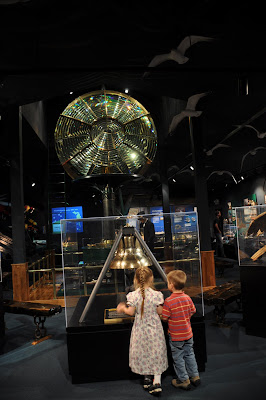 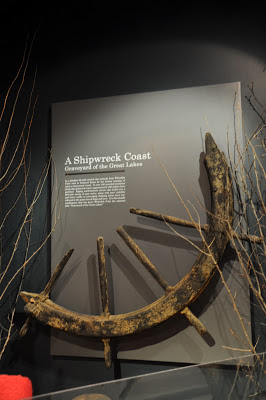 Many of the displays are actual artifacts from various wrecks.  They also have one of the early diving suits.  The thing is huge - looks like it was made for someone who is eight feet tall! 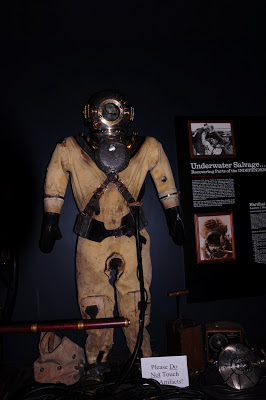 This very clever exhibit has life-size mannequins suspended over part of a wrecked hull, looking just like we were there swimming in the water with them (while the strains of "The Wreck of the Edmund Fitzgerald" played in the background). 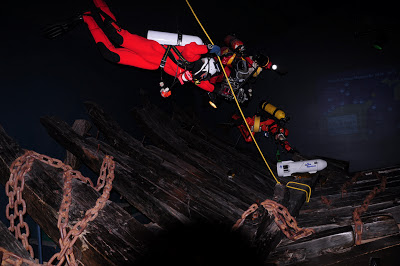 Here's another view of the light.  The dark exhibit room set it off brilliantly. 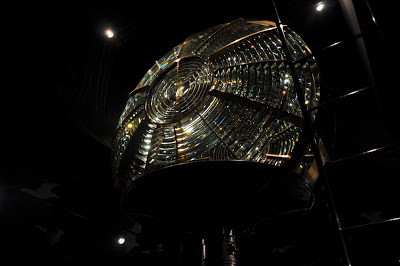 From the museum I headed to the lightkeeper's house.  This is another example of a lighthouse light.  A bit smaller, the white tube inside works the same way as the mantle in a Coleman lantern, and the glass on the outside acts as a lens, making the white tube appear larger than it is and creating a lot of light to bounce out from the cut glass and light up the night sky. 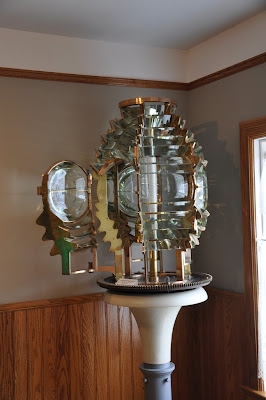 Half the house is decorated like a museum and has some artifacts from the 1800s, when this lighthouse was built, but the other half (it had been made into a duplex by the turn of the century) is done in 1920s style and has the rooms set up as the grand-daughter of one of the last keepers remembers it when she was growing up. 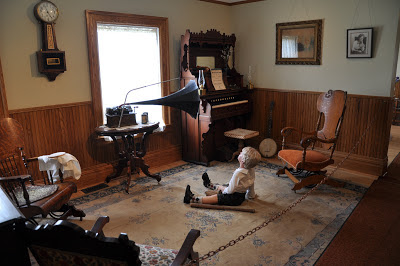 Having done my duty as a tourist, I walked out on to the observation deck to see the lake. 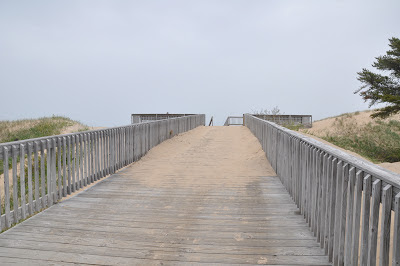 It was now after 4:00 in the afternoon and the fog was rolling in...fast.  We could hear the solemn blasts of what we presumed were freighters out on the water, letting everyone know just where they were. 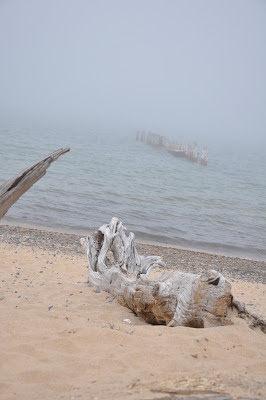 The wet rocks were oh so beautiful. 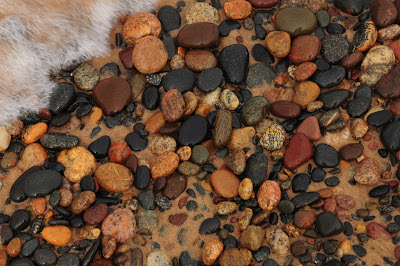 And the beach was strewn with lots of driftwood. 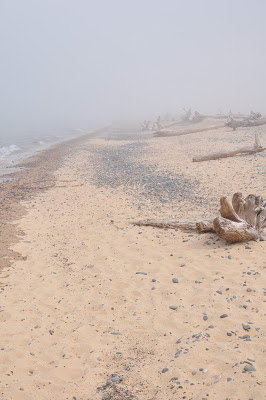 The fog grew so thick we almost lost complete sight of the lighthouse. 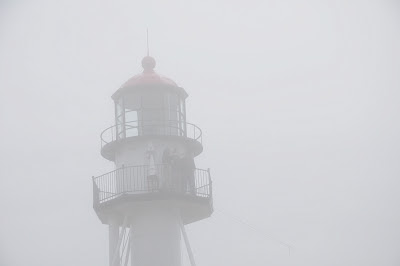 Around this time I began to wonder where the rest of the group was.  They had originally headed down this trail to the beach, so I decided to wander this way as well. 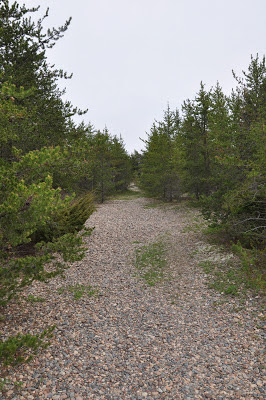 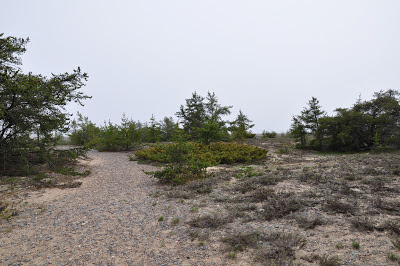 which gave way to very low growing things that looked a lot like juniper.  I didn't have a shrub guide with me, or a guide to the floral life of the Great Lakes, so I'm not sure what all I was looking at. 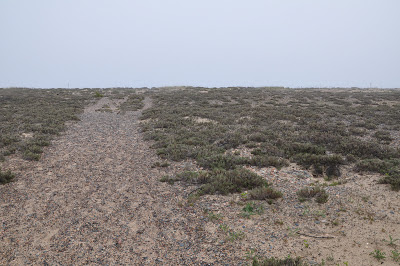 Eventually plant life disappeared all together and we were left with just rocks.  These shores are hit hard by ice and winds of immense proportions, or so I hear, so it isn't surprising the plant life is Spartan.  What likes this area, however, are shorebirds, especially the piping plover.  This section of beach is closed off to people in order to protect plover nesting habitat. 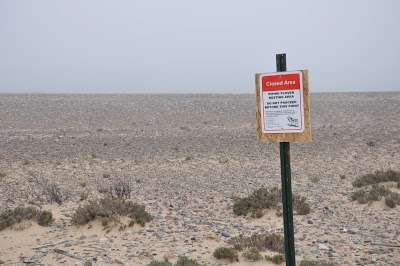 You can read about this endangered shorebird here if you click on the photo and enlarge it. 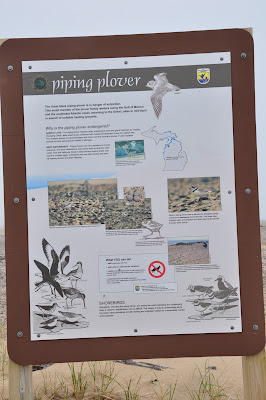 As I stood on this beach, which was around the corner from the foggy one where I stood earlier, I watched as the wind blew more fog inland.


Still, I hadn't found any members of my group, so I turned back toward the lighthouse and headed back to the parking lot.  Along the way I saw a shrub that looked familiar.  Could this be my old friend sweet gale? 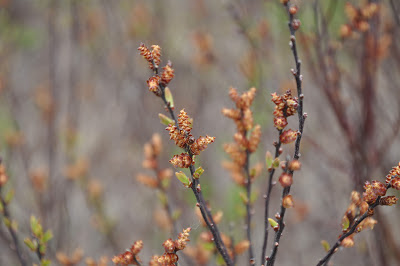 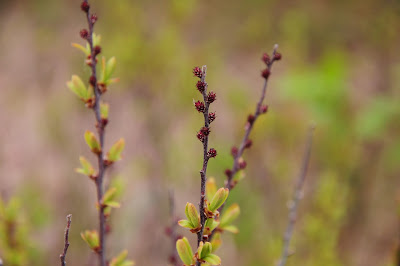 I found this bird beak on the ground.  Robin-sized.  Other than that, I have no idea which bird it was. 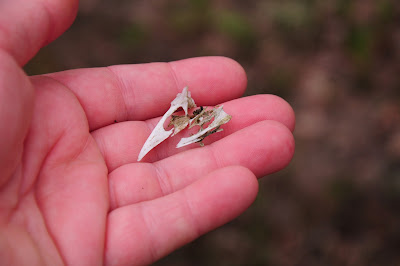 By the time I reached the lighthouse, the fog had completely blown away, and patches of blue sky were starting to break through the clouds. 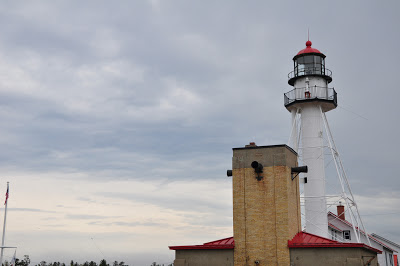 I walked back down to the first beach, hoping I might see one of the freighters I'd heard earlier.  All I saw were a couple common mergansers. 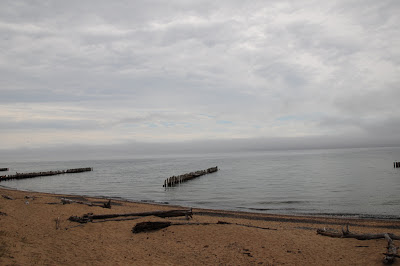 It was after 6:00 when our party finally reassembled and we headed back to Newberry.  The clouds caught up with us again and the rains that had spared us during the day finally let loose.  The area was desperate for rain, so everyone was happy to see the water falling. 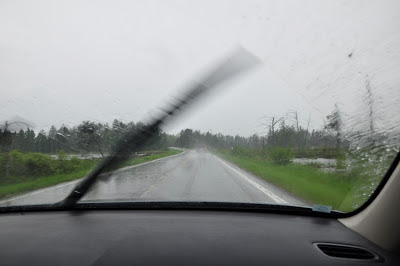 After a filling dinner back at the same restaurant where we dined the night before (and a long conversation with a morel hunter who was scoping out the burns for these delectable fungi), we returned to our motel and a cooler night's rest.
Posted by Ellen Rathbone at 4:51 PM

Email ThisBlogThis!Share to TwitterShare to FacebookShare to Pinterest
Labels: Great Lakes, travel, UP