So, here we are, at the visitor center at the Upper Taquamenon Falls.  Interestingly, this facility is apparently privately owned and is not part of the state park.  Signs alert visitors to exactly where they leave state land and step onto private property. 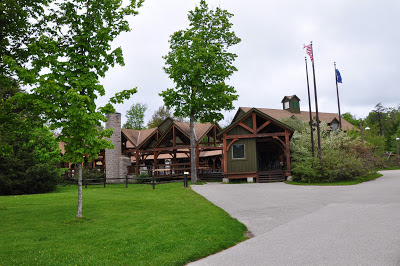 There's a brewery at one end, and we stopped in to see if they had restrooms we could use (it had been a long morning).  No restrooms for the public (unless you ate in the restaurant), but they did have this great eagle overhead.  Loved its catch (zoom in to see what's in its feet)! 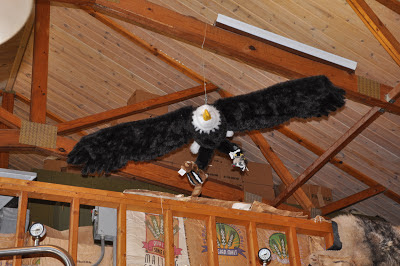 After locating the public restrooms, we headed for the falls. 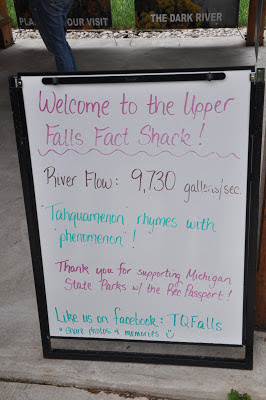 Along the way we took in the scenery.  Mountain ash was in bloom.  Looking closely at the leaves, I believe this is American mountain ash, which I've never seen before.  There were rumors of this in the Adirondacks, but all we ever saw was the European variety, which is taking over.  Hooray - a new plant to add to my life list! 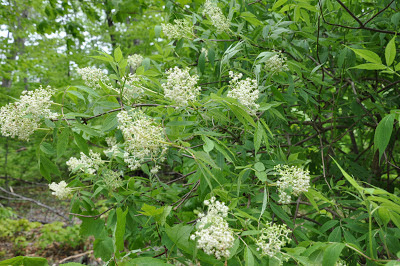 And I've now finally seen an American beech in Michigan that has the beech scale disease.  So far all the beeches I've encountered have been free of it, but the disease is here, no doubt. 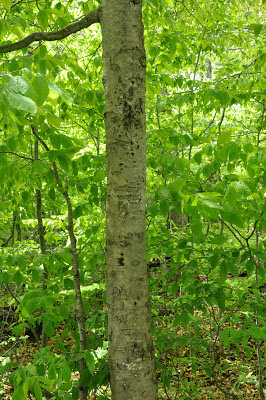 The day was not really warming up, and we found this yellow and black dragonfly trying to eek out some warmth from the asphalt path.  It was so chilly that it let me pick it up and put it on my hand.  After a photo shoot, I placed it on a maple leaf where the sun would hit it if it ever came out, and it would avoid being squashed by an errant visitor, dog, or stroller.  On our way back down the path an hour or so later, it was back on the asphalt, still hoping for some heat.  Thanks to a dragonfly expert we know (thanks, Don!), this has been identified as a mustached clubtail, and one that is newly emerged based on the shininess of the wings and the fact that the eyes have not reached their full adult color yet. 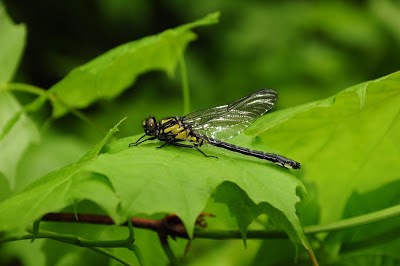 Soon we were getting glimpses of the falls through the trees. 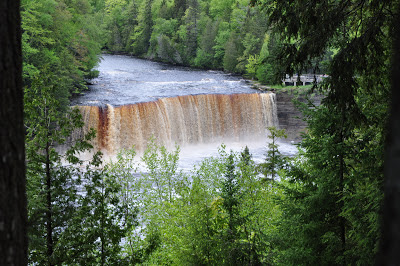 But this was not all I glimpsed.  With my eyes cast ever downward looking for plants, I soon spotted early coral root, a saprophytic plant in the orchid family. 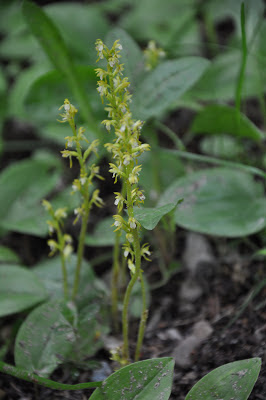 The green and white flowers are very small, 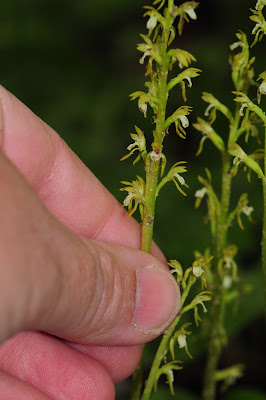 but their orchidness is beyond doubt. 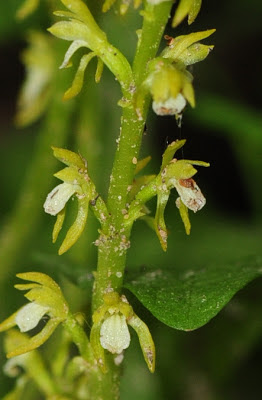 Looking around we found quite a number of these plants...I wonder if any other visitors saw them.  They all seemed to be along just the one side of the trail.  On the other side we found this strange-looking thing.  It's not a pale asparagus...it's squawroot, a root parasite that especially likes oaks. 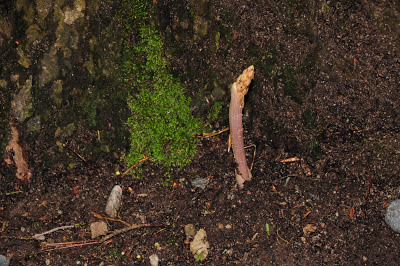 I was now on a mission...what other cool plants would I find?  Another coral root soon presented itself.  This was one I'd never seen before...and it wasn't in Newcomb's!  The wife of one of the birders is a plant afficianado and I later emailed them the photo for ID.  It is striped coral root, Corallorhiza striata.  What a spectacular plant.  It has the largest flowers of all the coral roots. 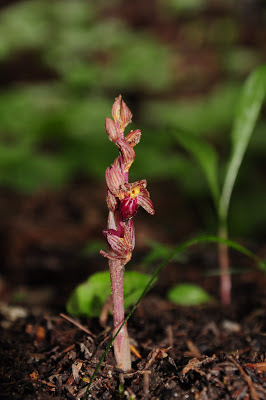 The falls kept calling to us, though, so we continued down the trail. 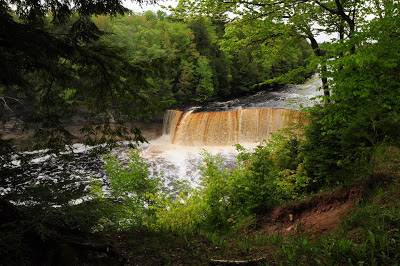 An American redstart was also calling to us.  I've heard these birds, but I've never had a good look at one.  This one cooperated enough that I was able to get a quick photo of it. 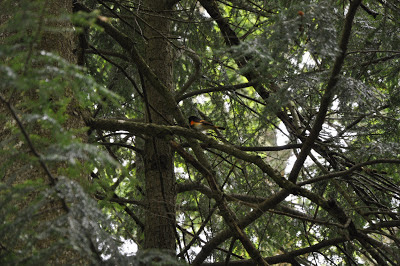 It was now time to descend to the falls. 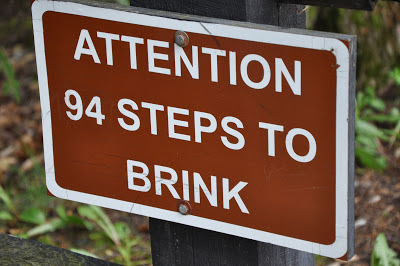 Ninety-four steps are not as many as you might think. 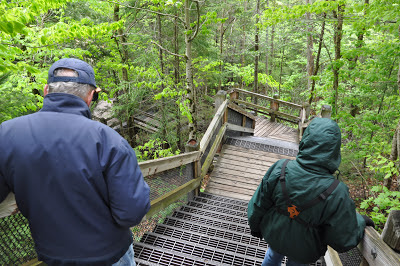 A wooden observation platform has been built right at the edge of the falls.  These falls drop about 40 feet...much more impressive than the lower falls we had seen the day before. 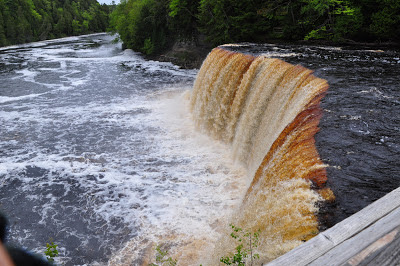 Paul told us how when he was a youngster he walked along the bare shoreline below the falls right up to the cascade.  From there he walked behind the falls, with the rock wall on one side and the crashing waters on the other.  We peered at the spot where he said he'd done this...I don't think you could reach it today. 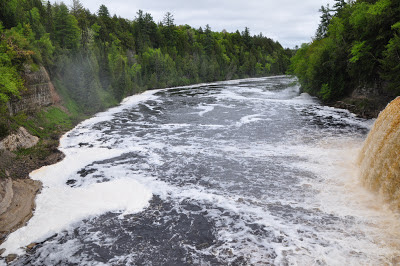 The Tahquamenon River was used for shipping logs downstream back in the big timber days of Michigan's past...much like the rivers back in the Adirondacks had been used. 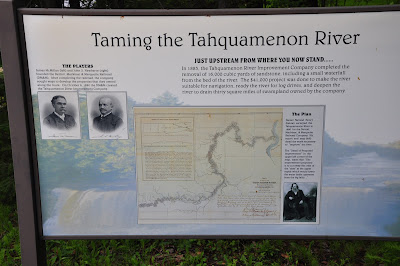 Day Three of our trip came to a close with the group all meeting up for dinner at Pizza Hut.  It was there that we discovered that the birders had become mushroom hunters that afternoon.  They had followed the advice of the fellow we met at dinner the night before, and revisited one of the burns in search of morels.  Their search resulted in a fairly good harvest of these much-sought-after mushrooms.

Stay tuned for the final day of our trip...
Posted by Ellen Rathbone at 2:42 PM