Today's school group was from Schroon Lake, and we lucked out with some great weather (cool, but sunny), and some great tracks.
My favorites today were the snowshoe hare tracks. This is the first time I have seen the actual toes on the tracks. Usually hare tracks only show the outline of the foot because it is so furry. But the hares that have been out lately have had their hind toes all spread out and you could see them perfectly! This photo was digitally enhanced so you could really see the toes: 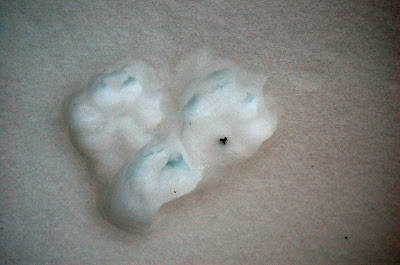 But even in non-enhanced photos, the toes show up pretty well: 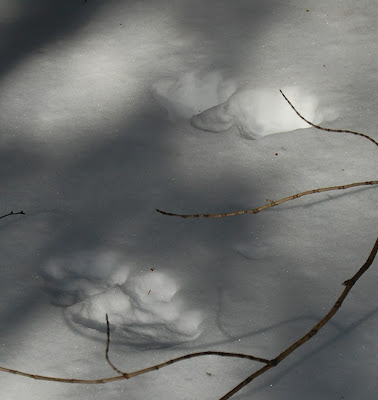 The red foxes have also been moving around. I finally got some good shots of the "perfectly straight line" they leave as they trot along: 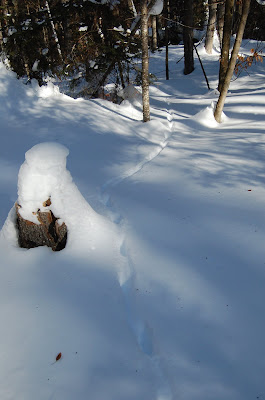 Wild canids often trot as their regular gait. When moving at a relaxed pace, the hind foot lands directly in the track made by the front foot (a direct register). The same is true with walking - on the ground a walk looks the same as a trot. The neat thing is that wild canids leave these nice straight lines of tracks - one foot after the other - plop, plop, plop. Rover can't do this. Neither can Fido. The domesticated dog is too fat and cannot get its leg perfectly under its body, so a dog's trot (or walk) does not show a perfect direct register and is certainly not in a nice straight line.
Fox mating season is in full swing (the female is in estrus for about three weeks, and the mating season runs from January through March). The red fox we were following today was leaving one scent post after another. 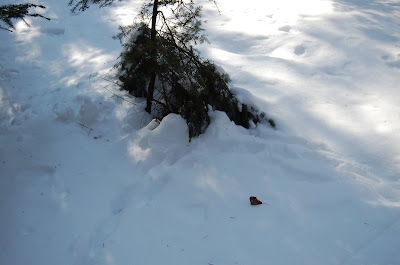 As I explained to the kids, leaving a scent post isn't the same as just peeing. If the animal is just relieving its bladder, there will be significant yellow snow. When the animal is scent-marking, though, a little goes a long way. 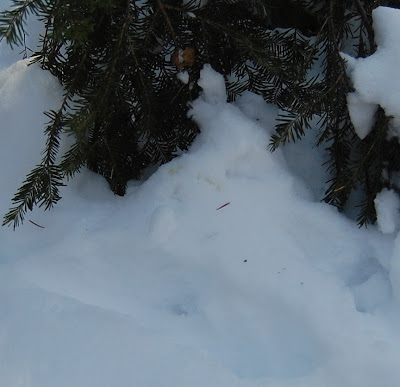 Of course, I made them all take a sniff.

"Ewwww!"
"That's gross!"
"Do I have to?"
It wasn't until the dad in the group started to talk about fox scenting posts and how his dad used to collect the stuff and make his kids wear it (presumably to cover their own scent while hunting or trapping) that the kids got into it. I guess I need a better lead up into sniffing scent posts.
Posted by Ellen Rathbone at 2:41 PM