I woke up Sunday morning to see this outside my living room window. HM. Either that was one large raccoon, or I had a bear. I put the leash on Toby and went out to assay the damage. 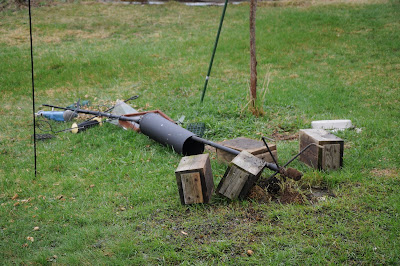 Stop 1: Where It Got In
I always knew that this fence would never keep out a bear, especially a determined one. Still, I remained hopeful. So much for hope. The bear just pushed the fence down, bending the fencepost by the garage, and walked right over the wire. 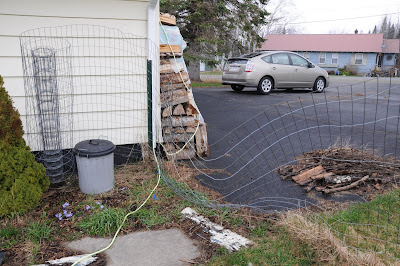 Stop 2: The Attractant
This feeder pole and its feeders were only about 50 feet from the entry point. The coiled up snarl is the remains of the peanut feeder, which I had filled last week (and the blue jays let me down here, because they usually empty it in less than a day and it's been sitting there for over a week). The smell of peanuts must've been more than a hungry bear could stand. The blue feeder, while severely cracked and with a twisted hanging wire, was amazingly resilient. The nyjer feeder, full of nyjer seed, was untouched (you can just see the yellow bottom at the bottom of the photo). 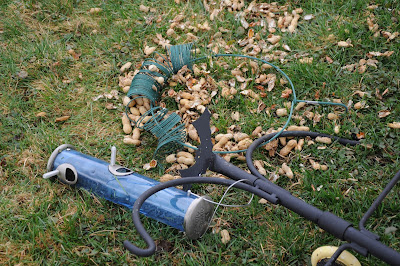 Stop 3: The Compost Bin
A quick walk across the yard, past the shed and the veg garden, brought the bear to the compost bin. While as a general rule I don't put meats or dairy in my compost bin, there was stuff here that the bear obviously wanted. Like the jar of furry lard that I lobbed in there this winter. And the paper towels full of doggie barf from Toby's upset stomach last week. 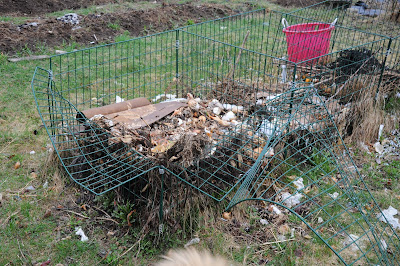 Stop 4: More Birdseed
This pole has seen bear damage twice before - and twice before my dad has gotten it straightened back out for me. Luckily I had taken in the really big hopper feeder - the one that can hold about five pounds of seed. 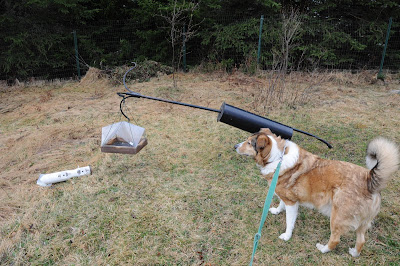 Stop 5: A Survivor!
This is the weakest of my feeder poles - but notice the distinct crook in its normally straight mien. The feeder you see on the pole was already empty, so the bear left it alone. A second feeder, which normally holds peanuts, had been filled with sunflower seeds a couple days before. It was chewed to bits and lying on the ground (you can see the green top, the green bottom, and the silver wire middle at the bottom of the photo). 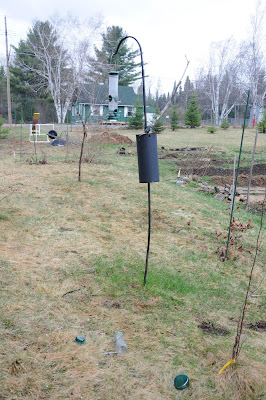 Stop 6: Exit, Stage Left
I next walked the fenceline, knowing that the odds of the bear leaving the same way it came in were probably slim. This is why I had Toby on a leash - I didn't want him haring off into the woods after a now-phantom bear. Sure enough, at the back corner the bear found a weak spot where two rolls of fence had been joined together. He just leaned against the wire and pushed. The join separated right behind the green fencepost there - you can't really see it too well. 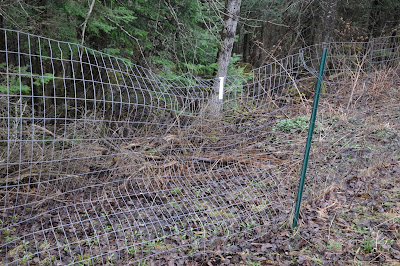 >sigh<
I really have no one to blame but myself. I knew I was taking a risk by still feeding the birds, but I just didn't get motivated enough to bring in the feeders.
Damage repair commenced. I straightened the fence as best I could, used pliers to repair the join, put a new fencepost in by the garage and rehung the fence, and tried, half-heartedly, to reassemble the compost bin. 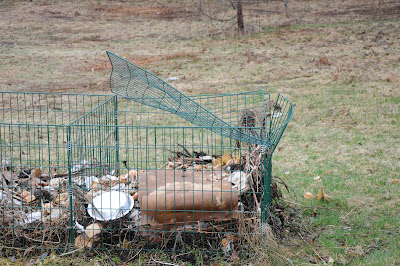 Compost bin: post "repairs" -
I think I need to get out some tools and do some more straightening.

And no, I never heard a single noise while all this havoc was being wreaked. For once, I was sleeping soundly. And if Toby heard anything, well, he isn't saying.

And from my dad, this poem:

Bear wakes up,
realizes it is hungry.
Bye, bye Jo's fence and feeders.
Posted by Ellen Rathbone at 9:39 AM