Close Encounter with a Grouse

I was sitting at my desk putting some finishing touches on an article about fireflies, when I heard a resounding crash from the front of the building. A few seconds later, the front bell dinged, and a couple visitors came it. I figured the crash was them banging around out front. Then a man came in, rather flustered.

"Is there a ranger here?"

"There's a bird out here. It hit the building and is injured. Can you come save it?"

We went right out. There, lying among the rocks bordering the hummingbird garden, was a ruffed grouse, and it had expired. The man was greatly saddened. As I lifted the bird, we could see its neck had been broken from its impact with the immoveable wall. A little blood glistened on its beak. I told him we'd put it in the freezer and see if anyone wanted it for a taxidermy specimen.

After they left, I took the bird back outside to get some photographs, for after all, how often does one get to see a ruffed grouse up this close? 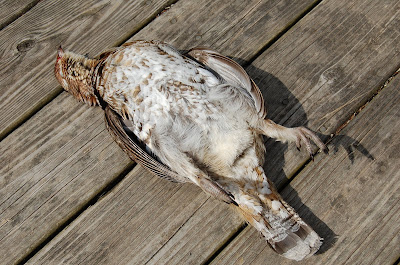 The coloration on the neck feathers was stunning. This is where the ruff is located. When in full display, the male erects these feathers, making it look like it has a feathery version of an Elisabethan ruff around its neck. The chicks apparently find this very attractive. 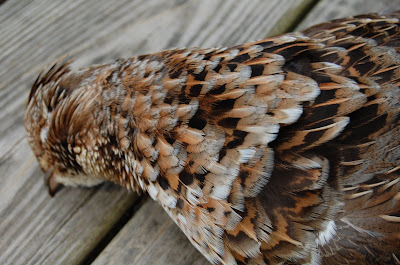 When relaxed, the tail isn't much to brag about... 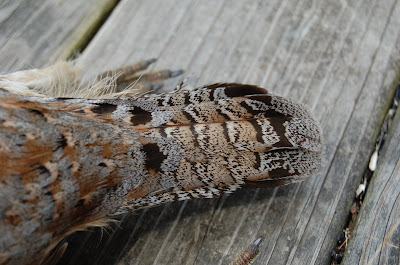 ...but when it's fully displayed, it is a beautiful appendage. 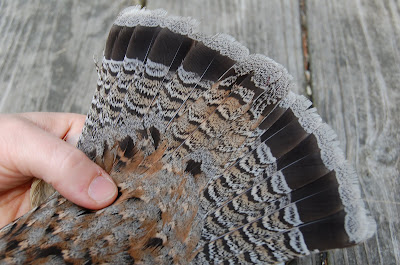 I was surprised at the lack of coloration on the wings, though. When folded against the body, only the uppermost part is visible, and it shares the cryptic coloration of the rest of the body. 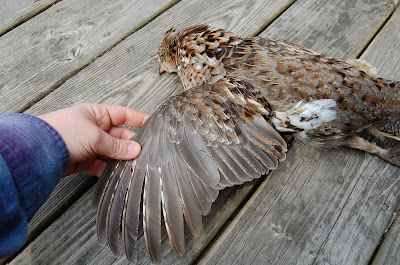 The head is topped with a small crest. Like many birds with similar decorations, these feathers are raised when the bird is excited. 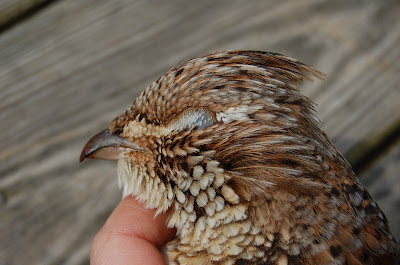 I've mentioned in the past how grouse grow special scales on the sides of their toes that enable them to navigate a little better in deep snow. 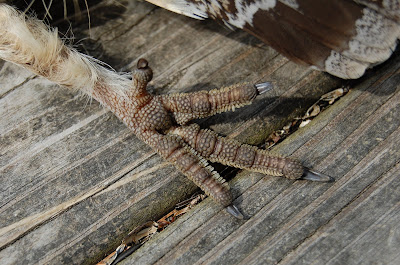 Here's a close-up of the toes and those wonderful scales: 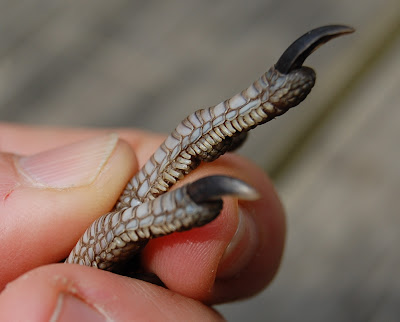 How beautiful is this? The colors are so perfectly suited for its environment, that when I went out to retrieve it, it took a few moments for me to actually see the bird, even though I was looking right at it. 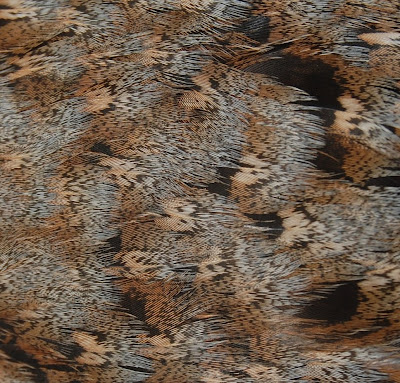 Obviously, this was a tragedy for this bird, but at least it gave us an opportunity to see a grouse up close and admire it's beauty and adaptations.
Posted by Ellen Rathbone at 1:02 PM