After spending a couple hours weeding four more beds of the veg garden on Sunday, I grabbed the camera and headed for the willow shrub, which was just swirling with insects. By now, thanks to three days of temps in the 80s, most of the catkins were "open" and the insects were in buggy heaven.

This little yellow dude was one of the first to catch my eye. I think it is a fly of some sort, but again, I have an ID request in at BugGuide. Will keep you posted. Update: Ken Wolgemuth at BugGuide suggested Scathophaga sp., so I looked it up in Kaufman's and found Scathophaga stercoraria, which seems like a pretty good match. This is a dung fly, which prompts the question "so why is it on the willow?". Well, it turns out that as adults, dung flies are predators; it's the larvae that feed on animal droppings. So, this adult was probably scoping out the scene for tasty morsels that were so focused on finding their own food that they weren't watching for predators. Still, it certainly looks like this one is snacking on the catkin. According to Stephen Marshall's Insects, this is also called the Pilose Yellow Dung Fly, and it usually breeds in fresh ungulate (eg: cattle) dung, where the male is known to guard the female while she lays her eggs. 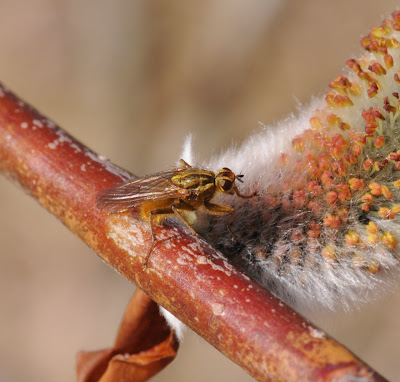 I was watching the larger of this pair, contemplating whether to take a photo of it or not, when the smaller one flew it and latched on. Turns out, the big one is female and the male decided it was his job to sire her offspring. His front legs were scrabbling the entire time, while his abdomen pumped away. I took some video footage of it, but I'm having a difficult time trying to load videos on this post. It's probably just as well, because between the wind blowing the branches and my legs shaking (I was kneeling upright - not a stable position), the video needs to warn viewers to take dramamine before watching. 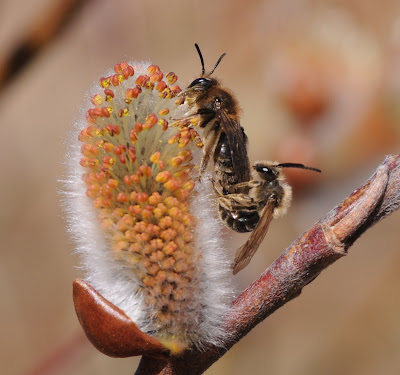 This enormous, and rather fierce-looking, fly came in and dominated the scene a bit. Isn't it the most bristley thing you've seen? 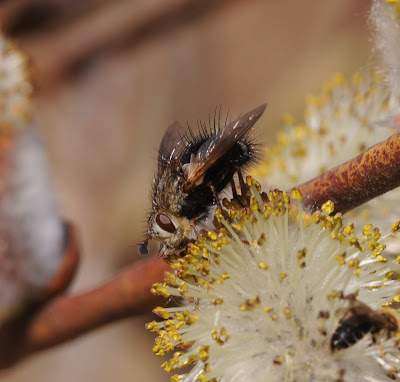 Here it is again, this time as seen from behind. I figure that white butt has got to be diagnostic. We'll see what BugGuide has to say. Update: Andy Calderwood over at BugGuide says it is a Tachinid fly of the genus Epalpus - the white patch diagnostic, as I suspected. Looking up Epalpus in my Kaufman's field guide, I see E. signifer as the illustrated specimen. This fly has a whitish face and thorax, which you can sort of make out in the first photo. According to the field guide, there are three species of Epalpus found in North America (the other two species are not found in the East). It's a parasitoid, laying its eggs on the caterpillars of a species of owlet moth. Reading up on this fly in my new weighty tome Insects, Their Natural History and Diversity, the very first sentence reads "We are surrounded by killer flies." The family Tachinidae is made up almost entirely of parasitoids. AND, just in case you are wondering, a parasitoid kills its host, where as a parasite does not. Anyway, the whole page about Tachinids is fascinating and gruesome. I won't violate copyrights by typing it up here, but if you really want to know some of the reproductive strategies of these flies, you'll want to find a copy of this book and turn to page 408. I don't recommend it as late night reading. 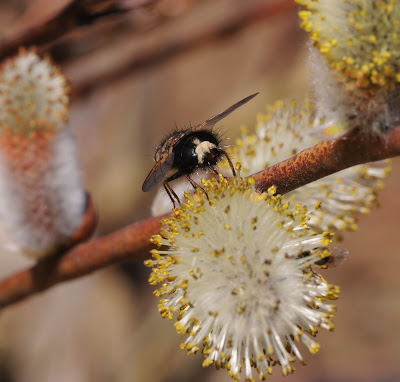 I checked out the black pussy willow, too, to see if anyone besides the flies were visiting. This small wasp was having a busy time getting a meal. 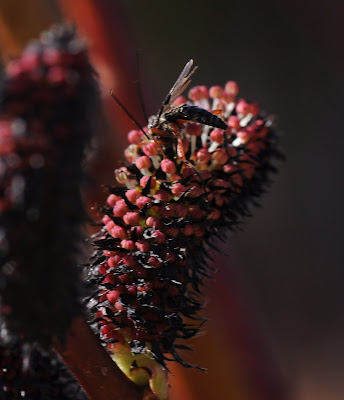 The daphne are all is full bloom. Amazingly, it is only this year that I've noticed how cloyingly sweet their scent is. It's got a kind of soapy quality about it. Ick. Still, up close the flowers are rather attractive. 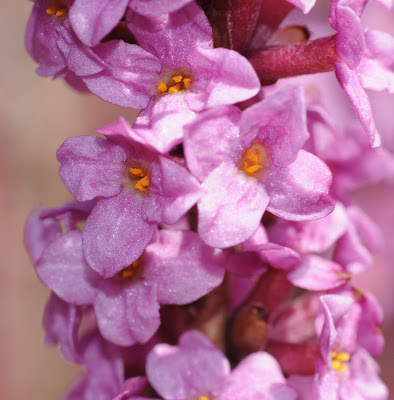 Zipping about the stem of the daphne was this sweet little jumping spider. It was so fast that every time it jumped, it reminded me of Jeannie in "I Dream of Jeannie" - a blink of the eyes and she vanished from here and reappeared there. Update: this is probably the zebra jumping spider (Salticus scenicus). Jumping spiders are delightful creatures. See those big black eyes? They have fantastic vision and will actually look up at you and watch you. The males are noted for their elaborate courtship dances - make the most of that good vision, eh? And when it comes to jumping, well, these guys can out-distance even our best long-jumpers, for they can jump up to 50 times their body length! Let's see, for me that would be something like 275 feet. But they've got rather scrawny legs, so how is that possible? They use a system kind of like hydrolics. Quick contractions of the muscles in the front of the body cause an increase in blood pressure, which in turn makes the legs extend rapidly. Zooooommm! Blink and it is gone! 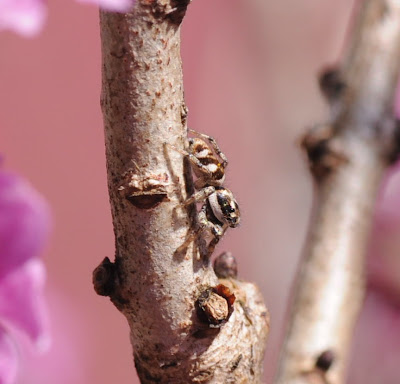 The place was hopping down at the vernal pool Sunday evening as Toby and I strolled by. Spring peepers and woodfrogs alike were busily singing their hearts out. I tried to get photos, I tried to call in the woodfrogs, but my efforts usually resulted in silence. So we finished our trip to the river and on the way back I gave the pond one more try. This time I just shot some video. Most of the action is behind the grasses (you can see the water roiling a bit), but at the beginning you can just make out a couple frogs as they bob near the surface. The high-pitched peeps are the peepers, and the quacking sounds are the wood frogs.

And here's what all the fuss was about - eggs! 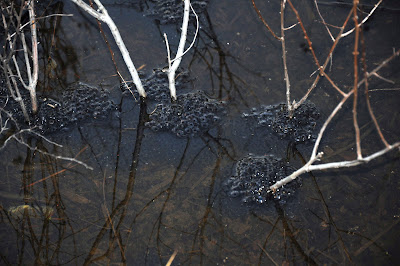 Our final find of the evening was this bizarre-looking thing. It's like someone crossed a caddisfly larva with a pangolin. It was creeping across the road, tucking its little tush underneath as it moved, much like a crayfish does. The head, stretched out here, was moving back and forth, sometimes extended way out, other times pulled back in under its protective armor. I collected it in a vial and brought it to work today, where my boss immediately said "OH! A firefly larva!" Well, who knew! 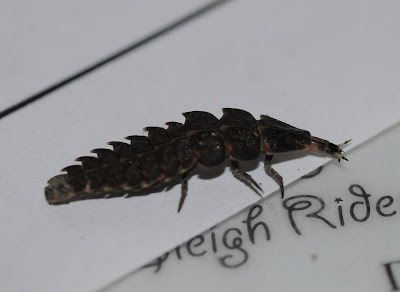 These guys are out at night hunting for things like snails. Like their parents, the larvae have glow-in-the-dark capabilities, but it was still light enough that this fellow wasn't lit up. You will be happy to know that he's been released back into the woods.