Another New Plant for Me

While wrapping up part one of an aquatic insects program yesterday, my eyes were caught by some small yellow flowers blooming at the edge of the woods. I didn't have my camera with me because it looked like rain, but I came back later that afternoon to get some shots. 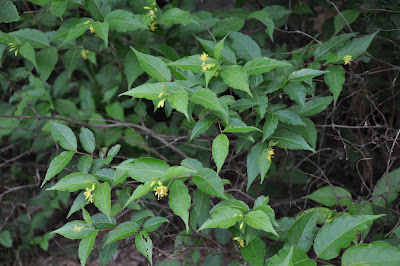 It turns out this is northern bush honeysuckle, Diervilla lonicera. While in the honeysuckle family (Caprifoliaceae), it is not considered a "true" honeysuckle because it is not in the genus Lonicera. The genus Diervilla, named after a 17th century French surgeon who introduced these plants to Europe around 1700, consists of three species, all bush honeysuckles. 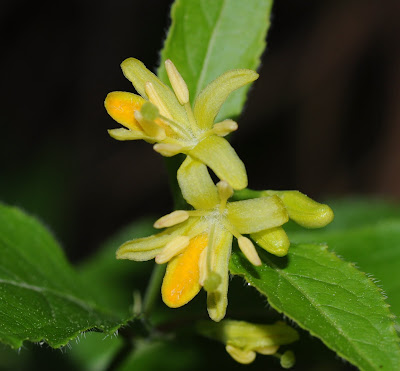 The flowers are just getting going here, and, according to Newcomb's, will continue to bloom throughout the summer. They are said to be fragrant, but I didn't take a sniff - I was in a rush to meet someone for a botanical foray (which I shall write about in the next post). 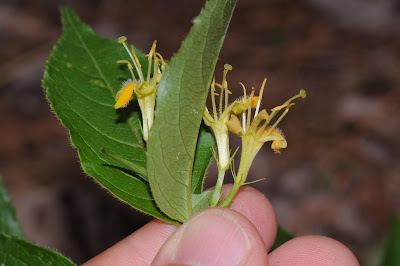 Because this isn't a European plant, there isn't a lot of folklore associated with it (at least not that I could find). Historically, though, it was used by a number of native peoples for a variety of things: diuretic, eyewash, constipation, stomach pain, a treatment for a prolapsed uterus, a venereal aid, and to treat vertigo. How effective it was for any of these ailments, however, my sources do not say.
Posted by Ellen Rathbone at 10:17 AM