Last night Toby and I walked 28N up to the wetland. I was hoping for turtles, but I think it was a bit too cool for them to be out. So, instead, I found myself captivated by some of the roadside plants, like this one: 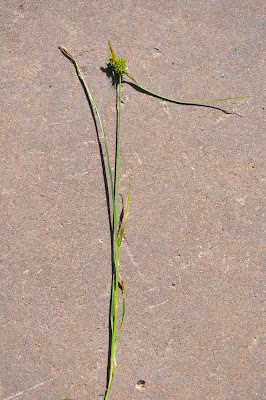 I was pretty sure it wasn't a grass and was most likely a sedge, but since I am now committed to learning a few of these plants this summer, I took a sample home so I could bring it to work for ID today. 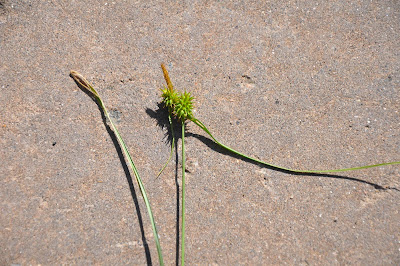 One of the things that stands out about this plant (at least to me) is the sideways jutting leaf emerging from the base of the female spike. Another thing that stood out is the brown bit sticking up above the spikelets - this is the male spike. I was hoping these would be good enough clues for an ID. 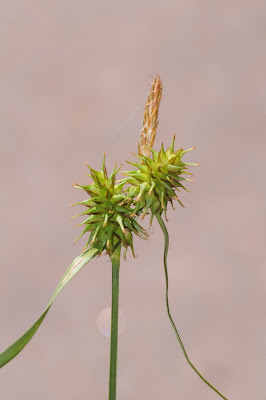 Sadly, they aren't. According to Lauren Brown's Grasses - an Identification Guide, the sedges (genus Carex) are a huge worldwide genus. In the landmark botany book "Gray's Manual of Botany" (my copy is from the late 1800s), Asa Gray documented over 250 species in eastern North America alone. Brown writes "Unfortunately for the lay person, many of these species look very similar. Fortunately, many of them are relatively uncommon and not often seen." HM...this wasn't boding well for my quest.

Still, I paged through Brown's guide, hoping to find an answer. Carex flava looked promising - the illustration was almost a dead-on match. But in the text it said "grows in clumps in wet meadows and shores..." Rats - mine was along the sandy roadside. The same held true for C. lupulina, C. intumescens, and C. lurida.

So next I turned to Edward Knobel's Field Guide to the Grasses, Sedges, and Rushes of the United States, a volume that is so small (only 83 pages, including the index) that my hopes were not raised.

Before I could really get into the ID, I had to learn the names of all the parts, otherwise I was going to be lost. Brown's book has a few labelled illustrations, but they weren't enough for use with Knobel's book. I finally found this website: http://fm2.fieldmuseum.org/plantguides/guide_pdfs/CW4-07.pdf , which has pretty good diagrams of Carex anatomy.

Here is a breakdown of some of the terminology:

In Knobel's book, much of the ID depends on what essentially amounts to dissection: I had to pull out a perigynium and learn as much as I could about its shape.

Just to give you an idea of how small the female spikes were, here is one next to my massive thumbnail. The lovely pink background is my finger. For science's sake, the whole spike measures about 3/8". 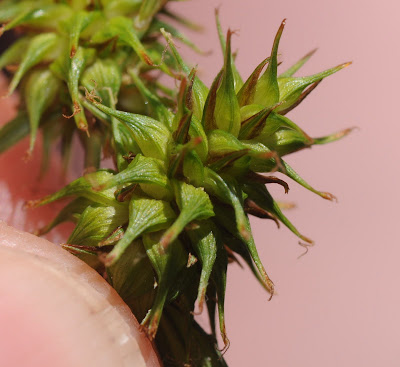 Not having any tweezers with me, I had to make dowith my abbreviated fingernails to try and grab a perigynium and pluck it out. It took several tugs. Here is the perigynium from one side... 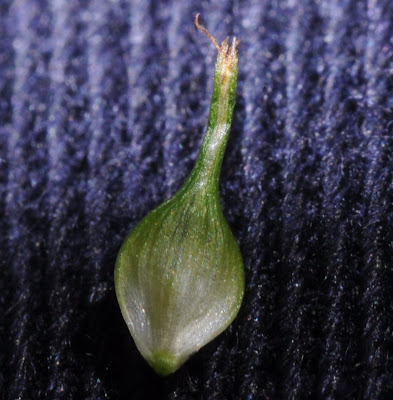 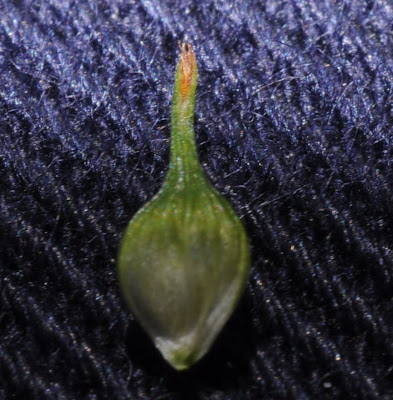 AND you have to have a good look at the glume, or scale, the part we might liken to the sepals on a "real" flower. 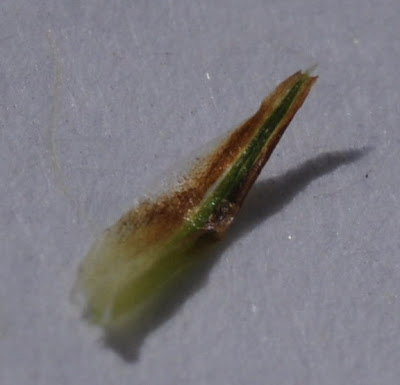 So, anyway, now I have close-ups of the essential plant parts and am thumbing through Knobel's key. The potential candidates are C. baileyi (found in bogs, so that's out), C. trichocarpa, and C. scabrata (in moist woods...maybe).

The thing with Knobel's key is that he keeps referring to a "seed pouch". I'm not sure (for he doesn't tell us), but I think this might be the perigynium. If I am correct, then using his measurements, I have a different set of potentials, but none of the illustrations match my samples.

HM...I'm having second thoughts about learning to ID these things.

Posted by Ellen Rathbone at 9:55 AM

Email ThisBlogThis!Share to TwitterShare to FacebookShare to Pinterest
Labels: sedges