The Other Side of the River

Time and distance can result in change. Even a short distance can make all the difference. Last week I made another trip to the Ice Meadows, except this time I met my friend Jackie and we toured the opposite shore - the eastern shore. This side gets different lighting during the day, as one would expect. There are probably myriad other differences as well, all tying in to microclimate, lighting, moisture, current, etc. This side has less cobble-y beach, with vegetation growing right down to the water's edge. It also has some wonderful marble slabs that rise like a miniature mountain range. This is prime sunbathing real estate for the younger crowd, and a great place to explore.

As usual, Jackie and I were scoping out the plant scene. We confirmed some of my sightings from earlier in the week, like this wide-leaved ladies tresses (Spiranthes lucida). The one I photographed earlier was just barely opening, and I was unable to determine for sure if it had the yellow lower lip. The specimens today left no room for doubt. 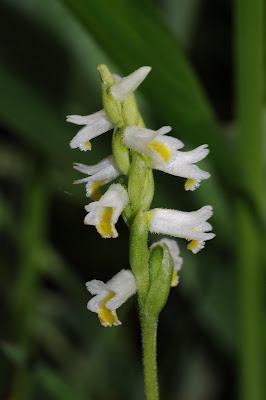 This tall pointy orchid caught my eye, and I asked Jackie which one it was. We stopped, looked, photographed, and had to key it out, for it was new to her as well. It turned out to be tubercled orchid (Platanthera flava), which isn't particularly rare or anything, but for us it was a great find. 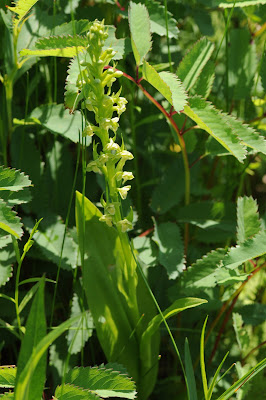 The word "tubercled" refers to the little bump, or tubercle, found in the middle of the lower lip. 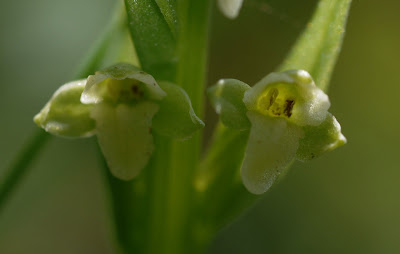 Another name for this flower is pale green orchid. Not very clever, but certainly descriptive. 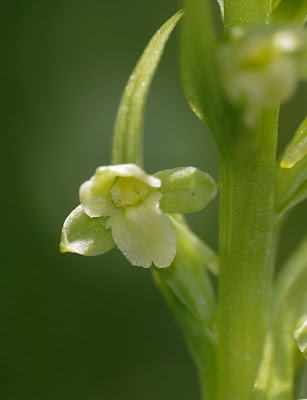 Another new plant for me was thimbleweed (Anemone virginiana). A member of the buttercup family, this native flower of dry areas was used for a variety of medicine by native people, including a cure for tuberculosis and diarrhea. 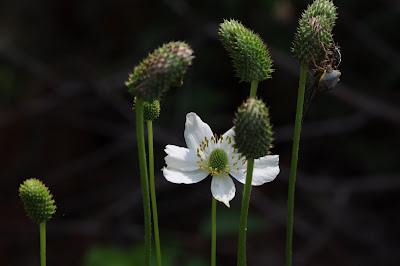 I am constantly amazed at the variety of cinquefoils that exist. Just when I think I've seen them all, a new one pops up. This is tall cinquefoil (Potentilla/Drymocallis arguta). To me it looked much like any other cinquefoil blooming right now, but it is indeed a different species. 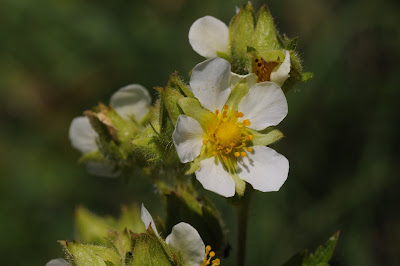 Did you notice any critters in the thimbleweed photo above? If not, here is a close up: a stonefly exuvia, or shed exoskeleton. This is the time of year to find these empty shells all along moving waterways. The nymphs crawl out on to rocks or vegetation, their backs split open, and out crawl the adults. 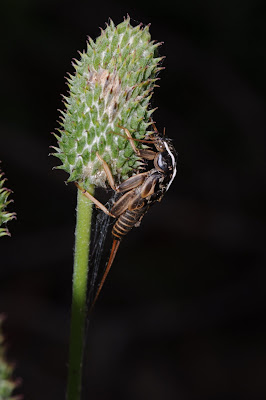 We were lucky enough to actually find an adult, too! 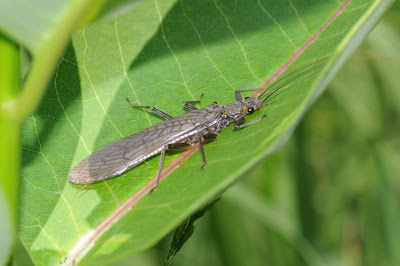 One of the Ice Meadows' rare plants is spiked nut rush. I couldn't find any information about "spiked nut rush" on the NYS Rare Plant List, but I did find whip nutrush (Scleria triglomerata) listed as found in Warren County, so I am wondering if that is what this is. 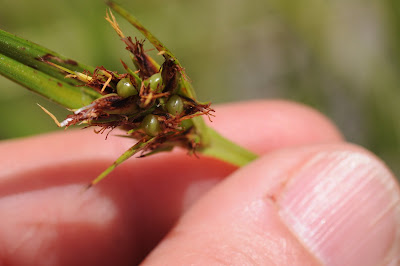 Wedged into the crevices of the marble slabs were some wonderful spatulate-leaved sundews (Drosera intermedia). Sundews rank right up there among my favorite plants. First, they are quite attractive, with their red fingers and greenish-yellow "palms". Then there's the droplet at the end of each "finger." This droplet entices insects, who think it might be a source of food. A rude awakening is in store for them, however, as this tantalizing droplet turns out to be more of a sticky goo than a sweet snack. Trapped, the insect struggles. This triggers rapid growth by the fingers, which reach over and further ensnare the insect. Then, the plant slowly digests the insect by covering it with digestive enzymes. Mmmm. Glad I'm too big to be considered a meal. 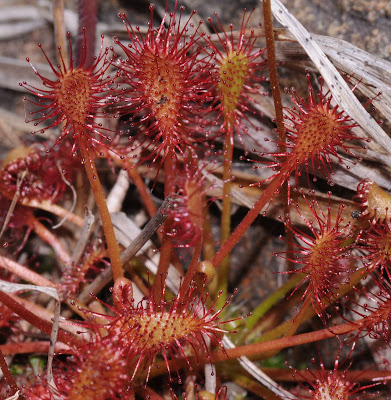 A further treat was the fact that the sundews were blooming! 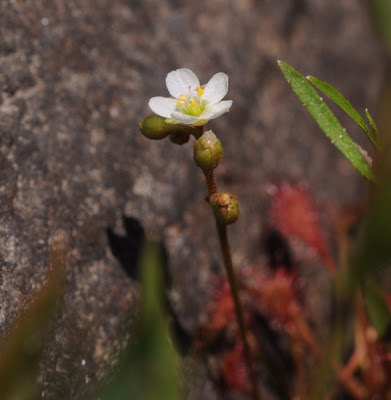 Another insect we encountered was this shield bug. 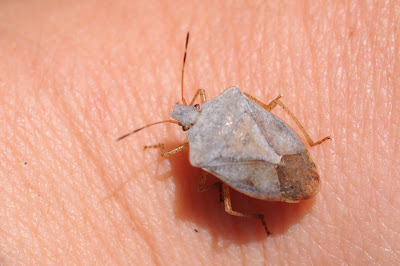 And we startled this very large and moody milk snake in the woods, where it was trying to catch a few rays that were filtering through the pines. It did NOT want its photo taken, and repeatedly struck at Jackie who valiantly tried to block its escape route. After a short chase, we let it go. 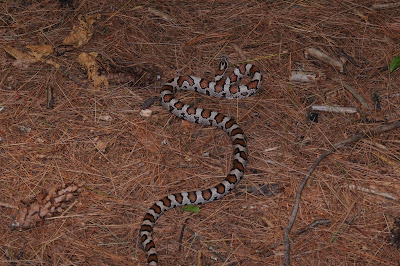 Meanwhile, back on the shoreline, I added frostweed (Verbesina virginica) to my life list. Again, I thought this was just another evening primrose until Jackie corrected me. Frostweed has been on my radar for a while, not for this flower, but for the frothy ice flowers made from the freezing sap that erupts from the stem in the fall. I've seen images of this, but have never seen it myself. Now that I know what the plant looks like, I know what to look for when the season is right. 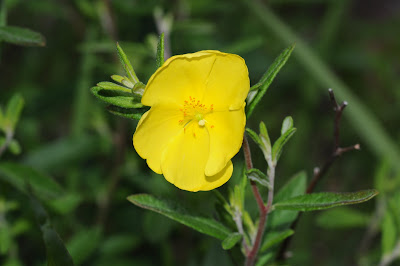 A number of dragonflies and damselflies were flitting about the shoreline - it was a good day for them. I haven't had a chance to ID this one yet, but I suspect it is a female because its colors tend toward brown rather than bright. 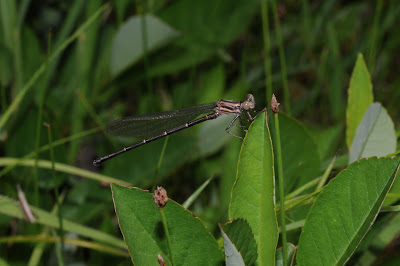 Rock sandwort (Minuartia michauxii) is a delightful little flower, growing in clumps along the rocks. Another new plant for me, and I got a bonus beetle with this shot. I'll be sending it in to BugGuide to get an ID on it, if possible. 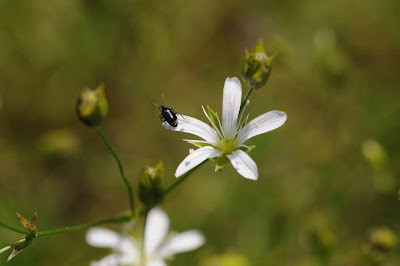 This was probably my favorite flower for the day: racemed milkwort (Polgala polygama). It's a ridiculously tiny flower, difficult to photograph, but I gave it a shot. Note how each flower looks a lot like gaywings, also a Polygala. Jackie said they aren't to common, but we lucked out and found several bunches of them. 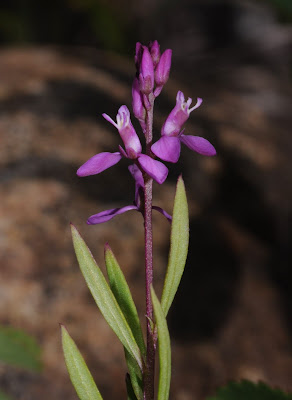 Wearing the same color scheme, we have the swamp milkweed (Asclepias incarnata). None of the milkweeds are blooming in Newcomb, yet, but here in the Ice Meadows they are starting to open. 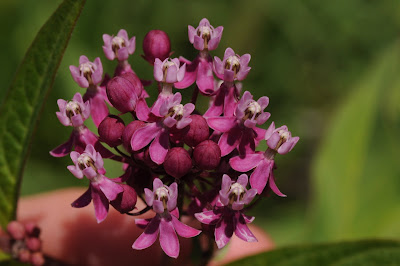 We saw several of these things, but have no idea what it is. I suspect it's a gall of some kind. I'll continue researching it, but if anyone knows, feel free to chime in. 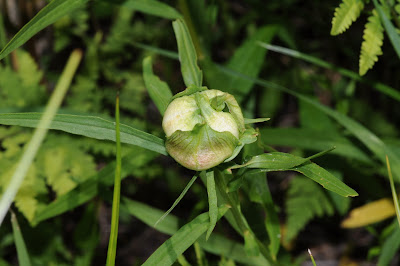 Bearberry (Arctostaphylos uva-ursi) was one of our last finds. Jackie was determined to find this low-growing plant, which makes a wonderful ground cover. Later in the season its lovely green leaves will be mixed with bright red berries, which bears are reputed to enjoy. A quick scan around the Internet shows that it is listed in many herbals, both as a food plant and for medicine. All parts are claimed to have some use. 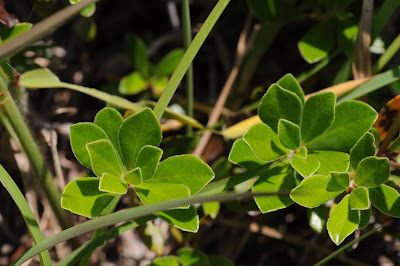 As always, it was a great day to be along the river!
Posted by Ellen Rathbone at 9:14 AM