It's So Close You Can Smell It

One:  chipmunks on the move at the bird feeders. 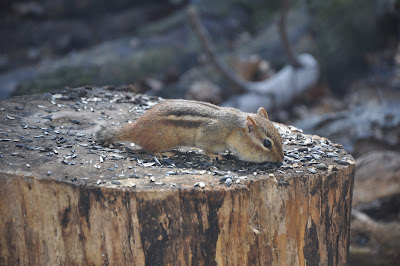 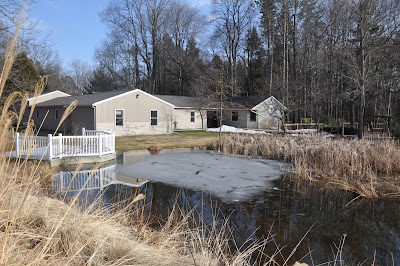 Three:  things that were buried under the snow are now visible. Such as,  deceased deer... 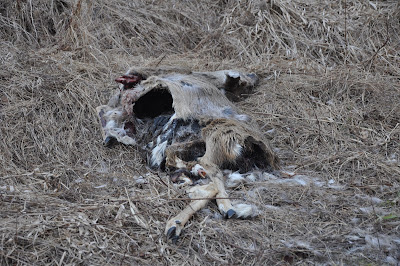 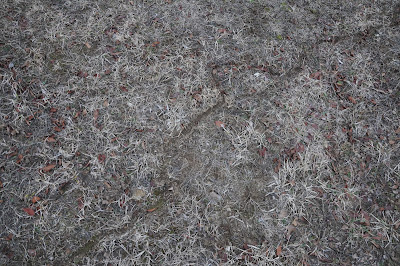 ...and that wefty white mold?  fungus? that lurks beneath the snowbanks. 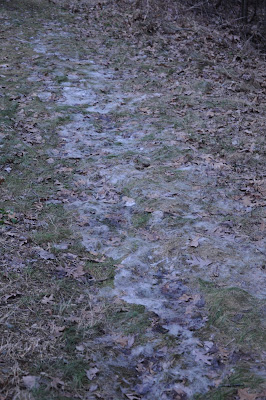 To take advantage of the balmy evening, Toby and I headed over to the Falling Waters Trail.  We weren't alone.  Older couples and good friends were out walking the trail for exercise.  A cyclist or two whizzed by.  We were even passed by a rollerblader.

The sides of the trails just beckoned, especially the ponds.  One of the naturalists at work told me today that she heard her first chorus frog of the year today, so I had to stake out the ponds for frogs (number four). 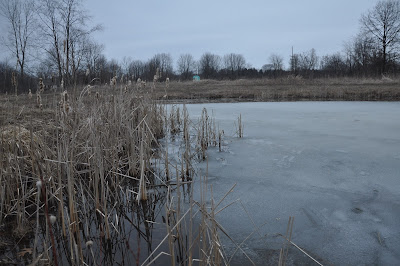 Ah-ha!  It was time to make a recording.  Now, I'm not going to win any oscars for my filming talent, so just close your eyes and listen.  Almost all the sounds of spring are there:  red-winged blackbirds, starlings, robins, and chorus frogs.  The frogs sound like the sound you get when you run your thumb nail down the teeth of a stiff plastic comb.  I haven't heard a chorus frog since I worked in New Jersey!  And later on, when it was nearly dark, I even heard a few spring peepers in the woods.

Wetlands abound in southern Michigan.  I can only try to imagine what spring was like three hundred or more years ago in this part of the state.  The cacophony of birdsongs must've been something to behold.  Even today, when mere remnants remain, the waterfowl and other birds still seek them out.  Ducks, geese, cranes...red-wings, woodcocks (I heard them tonight, too), killdeer...the air was full of songs (number five). 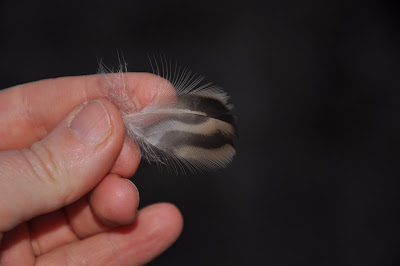 Much of the soil here seems quite sandy, which is perfect for turtles looking to lay their eggs.  Sadly, most turtle nests are predated by raccoons and foxes.  If they are lucky, each turtle has one egg make it to adulthood during a lifetime of egg laying. 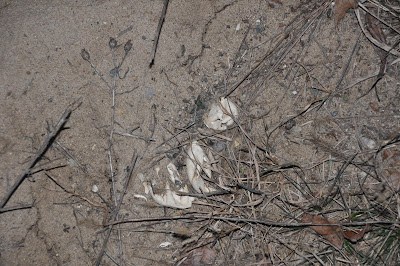 The find of the evening, however, was a dark form that fluttered overhead as we reached the end of the trail, heading home.  At first I thought it was a woodcock sweeping in to land.  But then I saw it...a bat (number six)!  A good-sized bat with broad wings.  Best guess is a big brown bat.  And then, even better, two more bats flew over.  A few minutes later, I saw two more!

Bats are doing much better here in Michigan than they are back east.  So far, it seems that White-nose Syndrome isn't here.  I'm sure it is only a matter of time, so I'm going to enjoy seeing bats again for as long as it lasts.
Posted by Ellen Rathbone at 9:11 PM