On Snakes and Shedding

Hooray for Herps!  Here's just one more reason why I love snakes:  they shed! 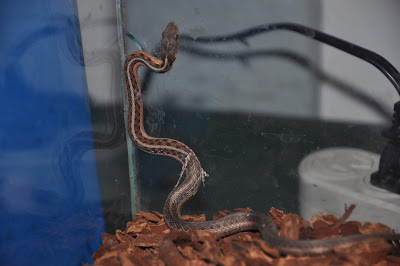 This is our little garter snake, brought in this winter from someone's basement.  We've kept it in an aquarium tank, filled with bark chips, a little log to hide under, and a small "pool" to swim in.  A couple weeks ago one of our staff thought the snake's eye looked cloudy - a sure sign that it was going to shed its skin.

A couple days later, the eyes were clear and that was that.  Hm.

Then, one of the naturalists saw the snake swimming in its pool.  Now, sometimes it will go for a dip to catch one of the tiny fish we put in the water - even snakes have to eat.  And when one eats, one grows.  Unlike people, snakes' skins do not stretch as they grow, so they must be shed.

Sure enough, the shed had started.  I shot the above photo last week - the molt had started.  But here we are a week later and it has progressed no further.  HM.  What could be the cause?  We evaluated our choices.  One - reptiles often need a certain amount of humidity in order to shed.  When conditions are just right, they will shed their skins in one whole piece, like this lovely carpet python skin I have from my days working at a zoo: 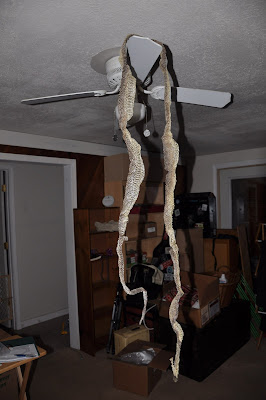 This could be why the little fellow was swimming in the pool - trying to moisten the skin enough to come off.

Two - perhaps the bark chips in the tank are too lightweight to give the snake something rough to brush against.   This is the second thing snakes need to successfully rid themselves of their old skins:  rough surfaces to scrape along.  These surfaces grab the skin and help peel it off.

One of the things I love about snake skins is that they are shed inside out.  If all goes well, the snake loosens the skin first around the mouth.  Then it rubs it off, peeling it off like you would a sock.  The shed skin will look like the ghost of its previous owner.  And not only does the skin show every single scale that makes up the snake's outer covering, it also shows the scales that are over the eyes: 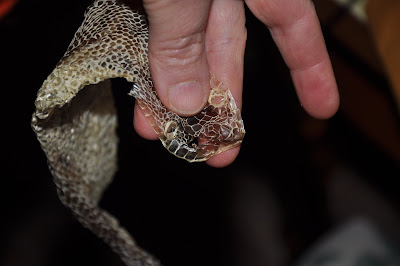 It's a shame so many people dislike snakes; they are fascinating creatures on so many levels!  They move without feet!  They CLIMB without limbs!  They smell the air with their tongues, and they "hear" with their jaws (they don't have ears - they feel vibrations with their jaw bones)!  They can unhinge their lower jaws from the upper to more easily fit their mouths around prey - and if that wasn't cool enough, the two sides of the lower jaws can also stretch apart in the front (think "chin") to further accommodate large food.  They can go weeks without food.  Some lay eggs; some give birth to live young.  They are soft to the touch, and make great accessories (I'm thinking while alive, not as skins that are converted into handbags, belts and shoes).  And to top it all off, they are terribly important at keeping things like mice under control.

So, the next time you see a snake, instead of trying to beat it to death, consider it in all its glory and send it your thanks for helping to keep our world in balance.

Posted by Ellen Rathbone at 9:07 PM

Email ThisBlogThis!Share to TwitterShare to FacebookShare to Pinterest
Labels: snakes