The sun rose in a rose-colored ball of fire this morning.  I could see it peeking beneath the windowshade in my bedroom.  I, of course, rolled over and tried to catch another few winks of sleep.  When I finally hauled myself out of bed, the morning's blush was gone.

Although the day was not as balmy as it was yesterday, it was still too lovely to be stuck indoors all day, so about mid-morning I grabbed my camera and hit the trails.  I was in search of skunk cabbage in particular, and frogs, for I had heard that the former was starting to bloom and I could hear a cloud of frogsong in the distance.  Nature was calling.

The little stream that runs through the property is a constant source of interest...I seem to photograph it every time I walk by!  One of our volunteers was standing near the stream as I came along, and he told me he had just seen a rather large muskrat take to the water.  I'll have to keep my eyes peeled for it. 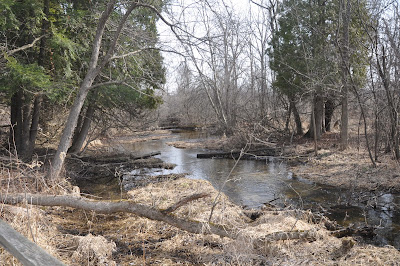 When I told Paul I was searching for the rumored skunk cabbage, he took it upon himself to show me right where it was blooming.  And there it was! 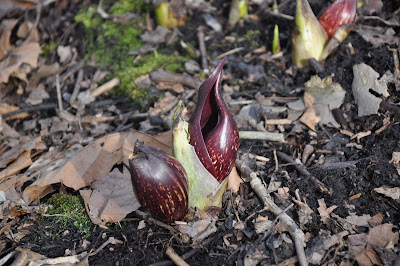 There were quite a few sending up their strange, prehistoric-looking flowers, each slightly different than the next in color.

Skunk cabbage, which is neither a skunk nor a cabbage (it is, in fact, related to Jack-in-the-pulpit), is our earliest blooming wildflower.  It may not look like something you'd want to grace your dining room table, and the aroma put out by this low-growing plant is certainly not one that is savored by most people.  In fact, the scent has been likened to that of rotting meat (of course, they say that about red trillium, too, but I never could detect anything disagreeable when I sniffed them).  The ground was a bit too damp today for me to get down on all fours and thrust my nose within the spathe (this flower doesn't have petals; the spathe, which takes the place of petals, is made from a modified leaf) for a whiff.  Maybe in a couple weeks.  Skunk cabbages put out this scent to attract their pollinators, like any good plant will.  In this case, the pollinators are flies.

But wait!  It gets even more exciting than that!  Consider the way this plant grows.  It sits there just waiting for spring to spring, and as soon as spring is in the air (regardless of the equinox), the spathe shoots upwards.  The growth is so rapid that the plant actually generates heat, which melts the surrounding snow (if there is any).  The dark color of the spathe starts to absorb the heat from the sun, and the cupped shape of the spathe contains the heat.  And it gets even better, because now the spathe generates a vortex!  Cold air rushes in at the bottom of the spathe, warms up inside, and as we all know, hot air rises, so upwards the warm air goes, taking with it the carrion scent of the plant's interior.  This is called advertising, folks - the call has gone out to all those insects that find the smell of decay attractive.  Pollination takes place.  Life doesn't get much better than this...or at least not for the skunk cabbage. 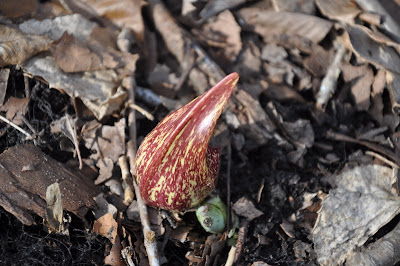 Paul and I saw a couple flies buzzing around, and I tried sneaking up on a beautiful red wasp, but the camera simply refused to focus.  I wonder which wasps are active right now...hm.

We continued along the path a short distance and I heard a rustle.  Then I heard some more rustlings. I looked down to see not one.... 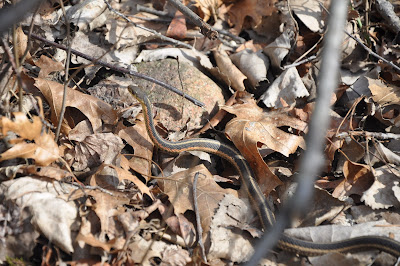 but two garter snakes.  We looked around some more and found... 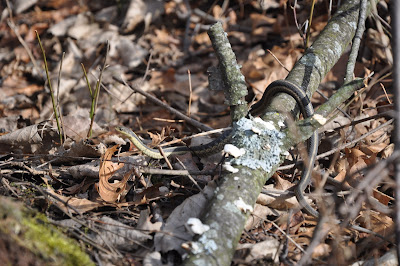 a pair wrapped together in a loving embrace.  The smaller male had found himself a female and was bound and determined to mate with her. 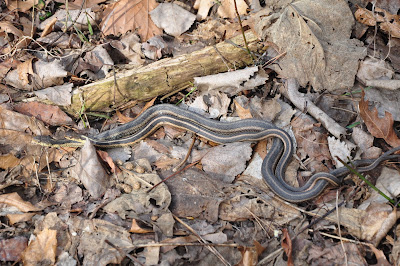 As we continued to look, more and more snakes appeared!  Right nearby was an old log that Paul said was the likely hibernaculum of these reptiles.  In the winter snakes seek out cozy places below ground to sleep away the season.  Very often, whole groups of snakes will congregate in these hidey holes.  Many years ago, at my second job as a naturalist, I came across a hillside covered with emerging garter snakes - there were hundreds, all slithering down the slope.  The males are all in search of receptive females, and when one is found, it is not unusual for multiple males to try to claim her all at once.  Big balls of snakes are sometimes discovered by hikers in the spring.  Because snakes are not well-loved by most people, those who find these balls can have less than thrilled reactions.  I, for one, hope to some day encounter such a mating ball. 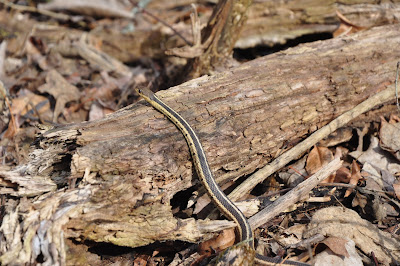 We continued around the trails, Paul pointing out to me where spring beauty, hepatica, gentians, and other wildflowers will appear as their seasons come into play.  We would our way toward the glacial pond, where the Cut and Dab Society is steadily making progress at eradicating invasive buckthorns, autumn olive and honeysuckle, and there we heard the frogs.  Forget the video from last night - this one is much better.  Spring peepers and chorus frogs were both in good voice this morning.


We had to head back to the office, though.  Paul had some birdfeeders to repair (a hungry raccoon wreaked some havoc last night), and I had work to do.  We saw the first butterfly of the season flitting across the prairie - it may have been a Compton's tortoiseshell (at any rate, it was orange and black, and it wasn't a mourning cloak).

It was good to get out, even if only for an hour.  I am eager to see what each day brings now that the equinox is almost upon us.
Posted by Ellen Rathbone at 9:03 PM