I've become quite curious about the mole activity around here.  There are plenty of moles in the Adirondacks, and I even had them tunneling through my yard there, but I've never seen mole activity on the scale I've seen it here in Michigan.  When they talk about mole hills and tunnels here, they mean massive structures (by comparison to those I saw in the 'dacks).   Why, you almost need an oxygen mask to scale the things, they are so large!  (Okay, that's a bit of an exaggeration, but to see a pile of dirt that's over a foot across and 8+ inches high - that's pretty darn impressive.)

So, a couple nights ago when I saw a mole hole along the road, I knew I had to go back and take a photo of it, preferably with a measuring tape.  I figured that with some data I might be able to determine just which moles were making these impressive structures. 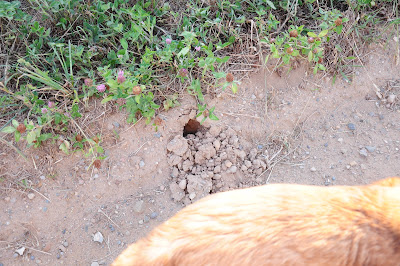 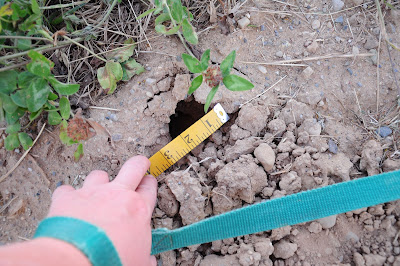 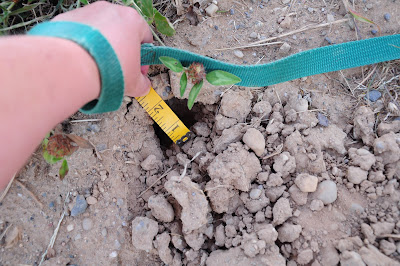 So, we went out, I found the hole, I photographed it, I measured it, and I've now looked it up in my tracking book. And I'm no further along than I was before.  Grrr!

Combing through available literature, and personal experience, I know that star-nosed moles prefer wet areas - swamps and the like.  My yard is not wet.  The road is not wet.   And this is not just because it hasn't rained in forever - I am just not in a wetland.  Therefore, the odds of these mole holes/tunnels/hills being made by a star-nosed mole are pretty slim.

There are four species of moles that are found along the western coast (broad foot, Townsend, shrew-mole and coast moles).  I'm not likely to have one of those here, either.

This leaves the eastern mole and the hairy-tailed mole.  I used to find dead hairy-taileds quite often in the Adirondacks.  Don't know if I've ever seen an eastern.

If you believe the Michigan DNR website, we only have eastern moles here, but I've seen a range map for star-nosed moles that puts them here, too, plus I've heard native Michiganders talk about star-nosed moles, so I think they are here, too.  Still, they prefer wet areas, so by process of elimination the culprit in my yard, along the road, and all around, has got to be the eastern mole (Scalopus aquaticus).

Case closed?  I think I still want to see one of the critters up close - that will be the only way to know for sure.

FYI:  mole hills are pushed up to become ventilation shafts - gotta get air into those tunnels (some of which can be quite deep).  Mole hills might be used for a hasty escape route, but they are primarily there to bring oxygen into the home.
Posted by Ellen Rathbone at 3:44 PM

Email ThisBlogThis!Share to TwitterShare to FacebookShare to Pinterest
Labels: mole