I love it when a dragonfly sits still for a portrait! 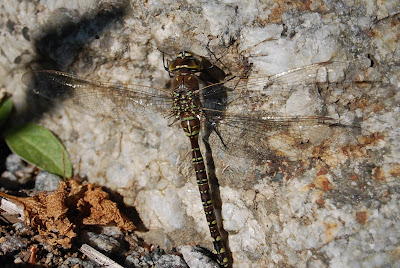 This lovely one was catching a brief respite on a rock by our butterfly garden. I believe it is a female Shadow Darner (Aeshna umbrosa). My book only has a photo of the male, which looks similar but has blue markings on the abdomen. The female is noted as being "duller, with yellowish markings."
I was trying to capture the bright blue that was reflecting off her eyes, but without much success.
The shadow darner breeds around slow-moving (sluggish) streams and lakes (we have that), but are often seen flying over upland clearings and woodland roads - I think our driveway meets that criterion. They are one of the last dragonflies seen flying around our northern areas.
A bit about the name: Aeshna is Greek for "ugly" or "misshapen." HM. Well, apparently the dude who named them back in the 1700s thought he was naming them "spear", which is Aechma, but the printers goofed. Members of the genus Aeshna are known collectively as Mosaic Darners, which refers to the intricate patterns on their abdomens.
And umbrosa means "shady". This and the word shadow in its common name both refer to the insect's preference for dark and shady habitats, as well as its tendency to fly late in the day as light is fading (although it was about 2:30 on a bright and sunny afternoon when I captured this one "on film"). They have even been known to fly around after dark. Hm. I wonder if these are the ones I've been seeing flying over the streets and parking lots in the evenings as I walk the dog. It's possible - they are known to sometimes engage in feeding swarms.
Here's another interesting tidbit: the females lay their eggs not in water, but in wet, decaying wood!
Posted by Ellen Rathbone at 2:50 PM

Email ThisBlogThis!Share to TwitterShare to FacebookShare to Pinterest
Labels: dragonflies