A Ramble in the Rain

On my way home yesterday from The Big City (Glens Falls), I stopped at the Ski Bowl in North Creek for a quick ramble in the rain. The Ski Bowl is the town's local park, complete with a beach (next to a tiny swimming hole), a playground, a pavillion, a ski hill (hence the name), a nature trail, and the town landfill. It's an interesting combination.

The reason for my stop is that I'm leading after school nature hikes for some of the local kids once a week for the next four weeks, so I needed to scope out one of the possible locations: the nature trail that runs through this park.

I'd made sketchy plans to meet a friend there, but our paths never crossed (although both of us were on-site at the same time). We'll try again Wednesday, thank goodness, for I lost the trail and found some plants I didn't know! 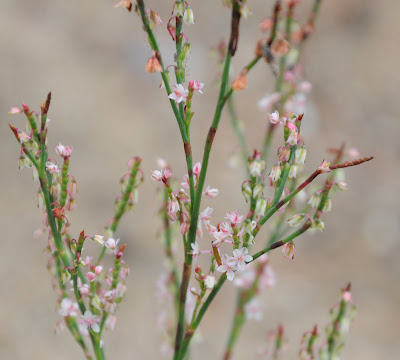 This little gem is Sand Jointweed (Polygonella articulata), a new plant for me. Evelyn told me to keep my eyes open for it, and it was all over the place, blooming in the sandy slopes behind the landfill. It reminds me of a cherry tree figurine my mother has from Japan. 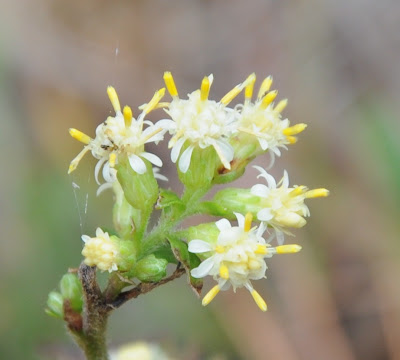 This plant is a mystery. I've been unable to key it out with my Newcomb's Field Guide. Hopefully Evelyn will recognize it tomorrow. Update: it is Silverrod (Solidago bicolor), which I have only seen a couple of times in my life and that was a few years ago. Thanks, Jackie! 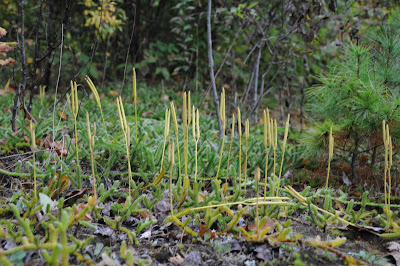 I encountered a large (and growing) patch of Running Clubmoss (Lycopodium clavatum). 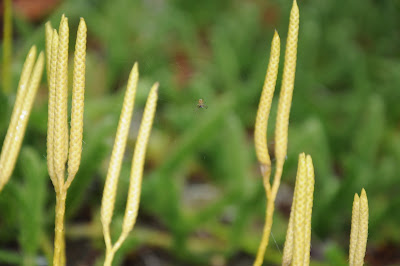 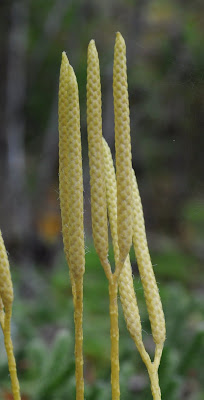 But I was able to get a good close-up of the sporangia. If you can click on the photo, you can see all the little white hairs that cover the outside of the structures. And, did you know that some native peoples would shove these sporangia up the nose to induce bleeding? Why, I don't know, but I came across this factoid while researching clubmosses for tomorrow's article for the Adirondack Almanack blog. 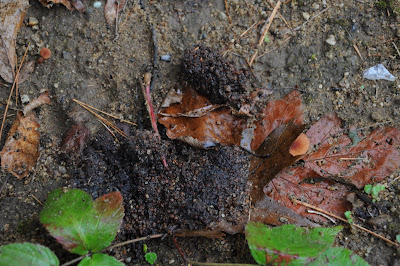 Raspberry poope (pronounced poo-pay) - bear scat. Now, you know I couldn't pass up a scat and not take its picture! 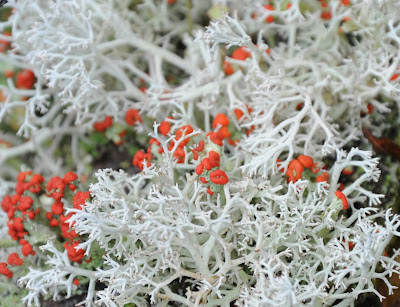 This is one of the first non-vascular plants I learned as a child: British Soldiers. British Soldiers (Cladonia cristatella) is a lichen, and here it is mixed with Reindeer Lichen (Cladonia mediterranea) known by most folks as reindeer moss, but it's not a moss, it's a lichen, so let's call a spade a spade, shall we, or, in this case, a lichen a lichen. The red part is the spore-producing part of the lichen. 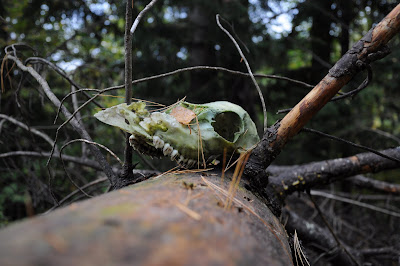 Someone found this deer skull and stuck it up on a fallen tree. It was rather strange seeing it there, but also kind of cool. I wonder how many people walk past it and never see it.
Posted by Ellen Rathbone at 3:07 PM