While ensconced on the melamine throne this morning I happened to glance in the tub and noticed that I was not alone. 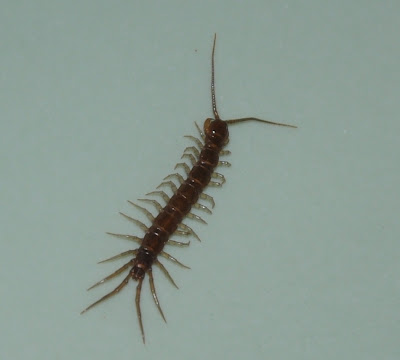 My erstwhile companion was a stone centipede, so-called because normally they live outside where they scamper around at great speeds under rocks. In these rocky domains they are top predators, chasing down woodlice, worms, springtails, grubs and other likely prey. Their phlattened physiques allow them to squeeze into tiny crevices to avoid being captured by curious naturalists and other potential predators.

If you look closely at the head of this arthropod, you will see flanges to either side. These are actually poison claws, which are in the retracted or resting position. When in hot pursuit of food items, these claws are ready to open up (like a blade on a jack-knife) and grab the prey before it gets away. For a pretty good image of these claws, visit http://somethingscrawlinginmyhair.com/2008/05/31/stone-centipede/ . Actually, if you look really closely at the left-hand flange in my photo, right up near the antenna, you can see the tip of the claw - it is partially open. Pretty cool, eh?

The burning question, however, is how did it get into my bathtub? They apparently enjoy hanging out in rocky streams, where moving water and lots of hidey holes provide good foraging opportunities. Did it, therefore, come up from the drain? If so, how did it get into the drain in the first place? Its presence there would suggest a hole somewhere in the drain...this does not bode well. I suppose it could've crawled up the side of the house, lifted the window screen (apparently they are quite strong) and fell into the tub. I have my doubts, though, since they prefer to be in dark tight places, and the side of my house is neither. Could it have crawled into the house and up the side of the tub, only to fall into the tub's interior? Considering the struggle it was engaged in trying to crawl up the slippery sides of the tub while I watched (and for all I know it is still doing), I suspect this option is a no-go, too. This brings us back to the drain. I'm not really liking the implications here. Hm.
Posted by Ellen Rathbone at 10:09 AM

Email ThisBlogThis!Share to TwitterShare to FacebookShare to Pinterest
Labels: centipedes