I was going to use this for an Adirondack Almanack article, but simply could not find the information needed. So, I put it out there for you readers to help me out. 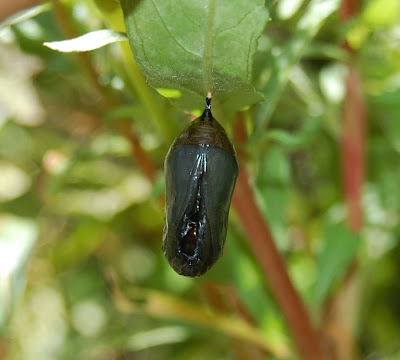 A visitor found this monarch chrysalis in our garden. As you can see it is all black and is sporting a good-sized hole.

The question is, what did it?

I called our other VIC and asked the staff there, for they have the Butterfly House and just might know. The answer I got was "a wasp parasitized it."

But what kind of wasp? Did it parasitize the caterpillar, or the pupa?

Armed with "wasp, monarch, chrysalis, parasite" I did a search on-line. Actually, I've done several searches over the last few days. I've called butterfly folks in other states. I've submitted the photo to BugGuide.net, and I'm still left without answers.

There is a Tachnid fly that commonly parasitizes monarch caterpillars, but when it emerges from the chrysalis, it leaves a white string dangling behind. There's no string here.

There is a Braconid wasp that is a parasitoid of monarchs (parasitoids, btw, lay eggs on the host, and the eggs hatch into larvae that consume and eventually kill the host; parasites, on the other hand, live in the host and may weaken it, but rarely kill it, like tapeworms). But all I could find out about this was that the female lays one egg on the caterpillar, which divides into five eggs and yields up to 32 larvae (every site stated this; it was as though one person wrote it and everyone else just copied and pasted it). Another dead end.

So, if there are any butterfly people out there, especially monarch specialists, do you know what did this?

In the meantime, I still need a topic for Saturday's article...
Posted by Ellen Rathbone at 3:21 PM