Sunday couldn't have been a more glorious last day of summer if it had tried. We had frost overnight, so the morning was brisk, but by 11:00 AM things had warmed up nicely. I drove to the Farmer's Market in Keene Valley to pick up some grassfed beef (and baked goods - Mmm), and in the afternoon I joined my friend Evelyn for a paddle at Moxham Pond.

Moxham Pond is a privately owned bit of real estate that I drive by when I make my weekly trip to the city for groceries. It is famous for its cliff, a rock face that sloughs off slabs of rock every so often. From the road you can see the cliff, and you can see the wetland, but it isn't until you get in a boat that you can really appreciate this spot. How lucky the people are who live on its edges and can enjoy it every season of the year! 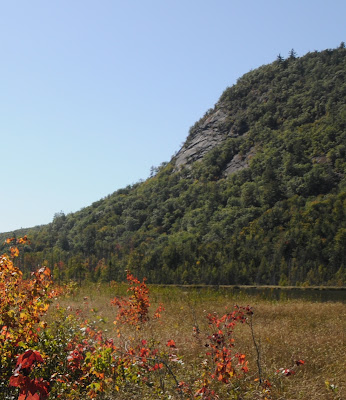 (this is a poor view of the cliff from the side)

We walked down the rickety dock and launched. Our destination was the bog on the far shore. 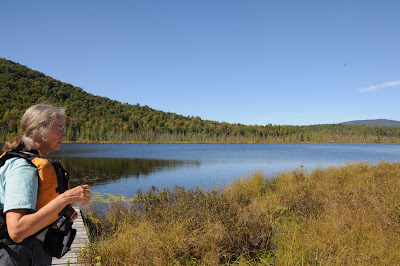 Evelyn is an amazing botanist. Self-taught, she fits the definition of the traditional botanist. She knows every plant, from moss to liverwort, grass to sedge, flower to tree, and all by their botanical names. Because I work mostly with the public, I've left scientific names by the roadside and instead I learn the common names. Unfortunately, common names change greatly, from location to location, which is why scientific names were developed in the first place. So, going botanizing with Evelyn is a real treat. I feel as ignorant as any new student. It can be quite the learning experience. 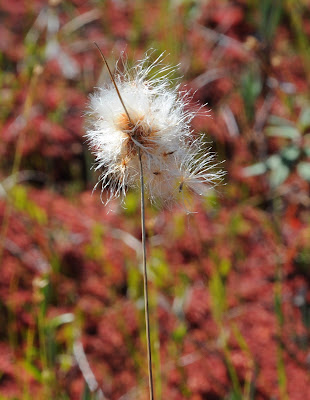 One of my favorite plants is cotton-grass (Eriophorum spp). Evelyn told me that we have two species up here, one that blooms early (around June) and this one, which blooms later. The former is very white, whereas the latter is more tan. It also turns out that cotton grass is not a grass at all, but, rather, a sedge. Now, I think she told me this is tawny cotton-grass (Eriophorum virginicum). 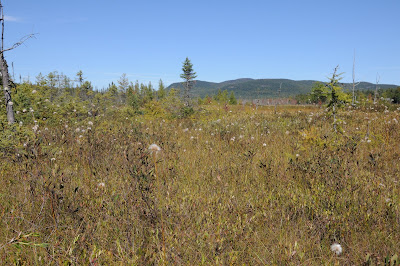 The bog was filled with the downy heads, each swaying in its own direction as the wind sighed across the mat.

Mosses, as you can imagine, are quite prolific on a bog mat. Sphagnum mosses, primarily, although we were really hoping to find some Splachnum, a rare moss in these parts that grows on old scats. (We didn't find any.) Many of the mosses were bright red, a condition, Evelyn said, that apparently helps keep the plants from getting sunburned. When the same mosses grow in the shade, they are mostly green. Okay, so here are the four sphanum species we found: 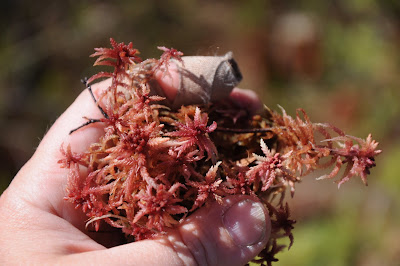 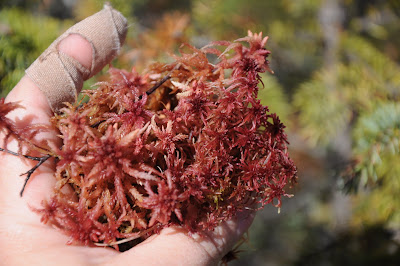 On the right, Sphagnum rubellum , a narrow-leaved variety.

It's next to the first one for comparison. It likes very acidic environs. 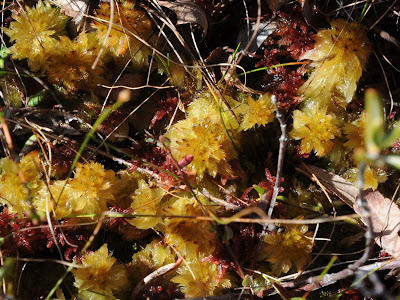 Sphagnum cuspidatum, also known as drowned cat because it likes very wet areas and when it is good and soggy all its leaves are plastered down, like the fur on a very wet cat. 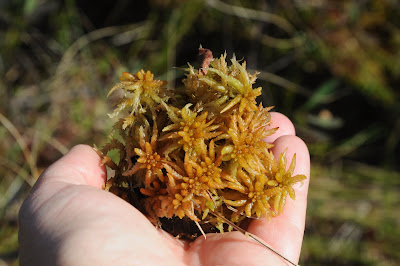 Sphagnum mosses are the stuff from which peat moss is made. Y'know - that fluffy stuff that you mix into your garden or your potting soil to improve drainage, or to increase acidity. It is "mined" from bogs, where in some places it extends many, many feet down. But, such mining is, obviously, destructive to the habitat. It takes hundreds and hundreds of years for peat mats to get that deep, and only a few moments to destroy the ecosystem. Thank goodness peat mining never caught on in the Adirondacks! Bogs are terribly unique habitats, full of wonderous plants and animals. I'm glad we've had the foresight to protect them in our Park.

We encountered some small mushrooms: 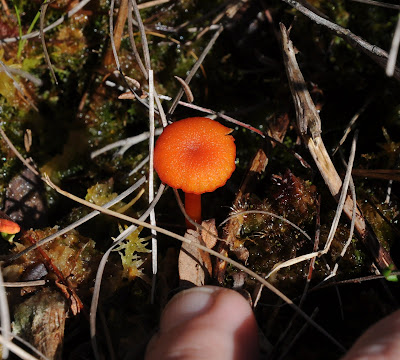 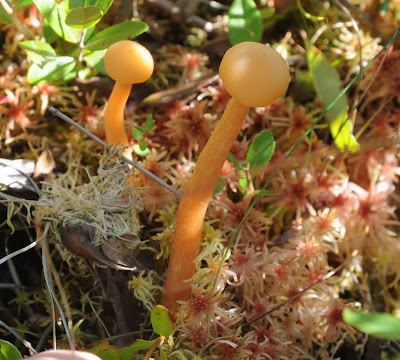 as well as this flattened one, which was pinkish along its stem when Evelyn tugged it from the moss mat. It was very slimy. 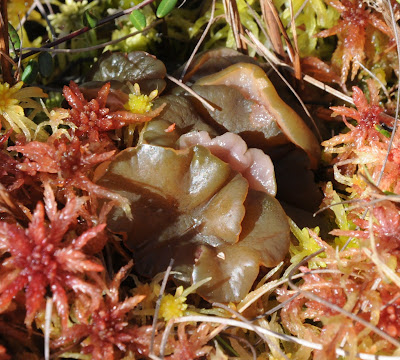 Bog Rosemary (Andromeda glaucophylla) was quite common. I loved the white racing strip that ran up the center of each leaf. 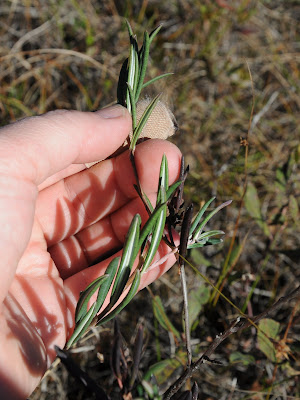 We had our eyes open for cranberries. Evelyn was especially interested in finding the small ones, (Vaccinium oxycoccos), which bloom earlier in the summer and should be producing ripe berries by now. While we did find a few berries, most of the plants were berry-less. The larger cranberry (V. macrocarpon) was also starting to ripen. 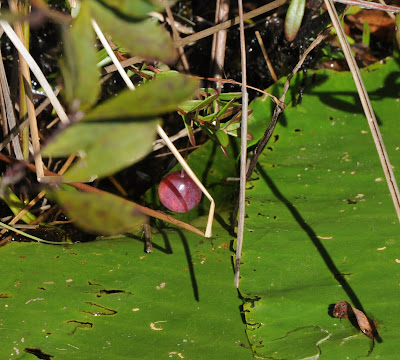 Dragonflies were everywhere, especially some enormous bright blue ones. They refused to perch, so getting a photo of them was very very difficult. Using the best of the poor images, I think I have determined that they were Canada darners (Aeshna canadensis). 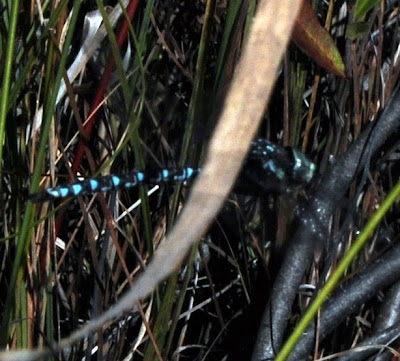 Farley, the German shepherd, met us when we returned to the dock. He wrapped his toes over the edge and looked for all the world like he was going to join Evelyn in her boat. Luckily, he stayed on the dock. 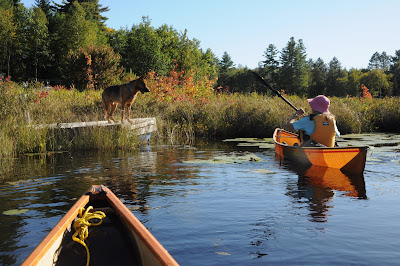 All in all, it was a perfect day. Thank you, Evelyn, for the treat!