In the world of science, the equinoxes and the solstices change dates from year to year. I, however, tend to think of the first of each new season as beginning on the 21st of its appropriate month. It may not be technically correct, but I like it that way. So, for me, the first day of Autumn was 21 September, not the 22nd.

That said, I spent my first day of Autumn 2009 at the car dealer's getting an oil change, new tires, and an inspection (well, my car got the oil change, new tires and inspection; I just paid for it all). Then I grabbed my groceries and headed back north, stopping at the Lake George Wild Forest in Warrensburg for a quick stroll along the Hudson River (why is it not the Warrensburg Wild Forest, or the Hudson River Wild Forest - afterall, it's not even near Lake George). My goal was to check out the Ice Meadows that "everyone" has been visiting. I've been here before, but didn't know that's what I was viewing. The folks in charge of this little park should really invest in some interpretive materials.

So, down the Blue Trail I went, through the very open woods, and then down the cobbly herdpath to the Hudson River. 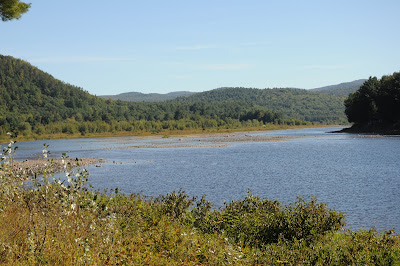 The shoreline was full of plants and mud, and the river glittered bluely in a fair breeze. At this point the river is really quite shallow. 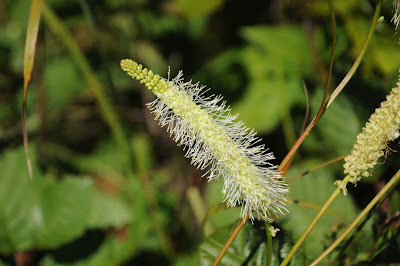 I found a new plant to me: Canadian Burnet (Sanguisorba canadensis). The flower head struck me as a type of grass gone to seed, but it wasn't. And the leaves struck me as rose leaves, but the flower was definitely not rose-like. Well, it turns out that Canadian Burnet is in the rose family! A more northern species, it is fairly common along the Hudson, at least the northern reaches of the Hudson. I know Woodswalker has seen it down her way, too. 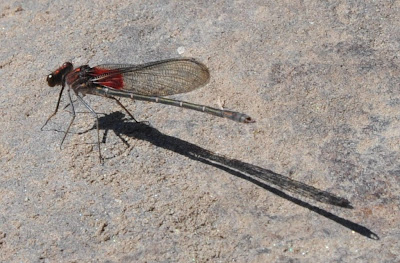 and then a female of the same: 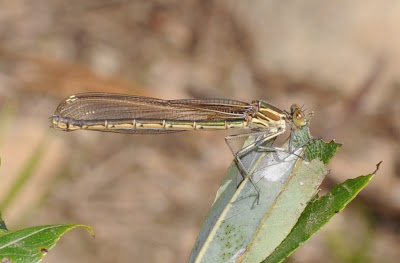 Isn't it interesting how different the coloration can be between male and female dragonflies and damselflies? It's actually more dramatic, in my humble opinion, that the differences between male and female birds of the same species. It can make ID interesting. Here I thought I had found two different damselflies, but they turned out to be the same species. I have also found that damselflies tend to be much more cooperative with photographers than dragonflies.
Posted by Ellen Rathbone at 11:15 AM