Always Something New to Learn

This last Saturday I went to a tracking workshop down at the Wilton Preserve near Saratoga. It was led by Vince Walsh, a tracker and outdoor enthusiast who is the founder of Kawing Krow Awareness Center in Greenfield. I participated in a tracking class with him last year at the Paul Smiths VIC and knew that I would learn something new if I did it again.

Fellow nature bloggers Jackie and Sue were also there, so it was a nice little reunion for us. We started off indoors with a quick overview of tracking, and then headed outside where the tracks were. There wasn't a lot of snow, but we all strapped on our snowshoes anyway. And then we were off. 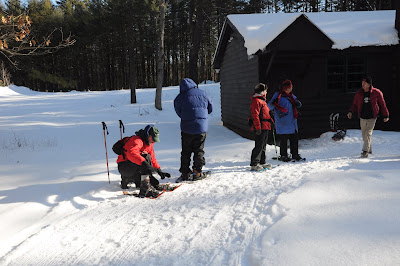 The first thing Vince did when we headed out was to make a couple prints in the snow: his mitten and a snowshoe. We were to note how they looked and compare them to what they would look like later after the sun had had a chance to work on them. So, looking at them in the first photo, when they are fresh, we can see that the edges of each track are very sharp and distinct. 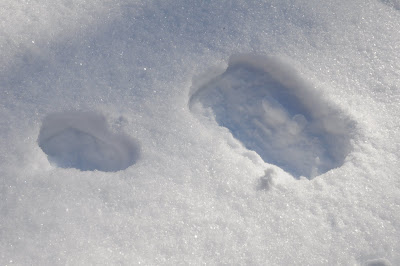 Here they are about an hour and a half later. Note that already the edges are softer, rounder in appearance, melted by the sun. Even the definition in the bottom is not as sharp. 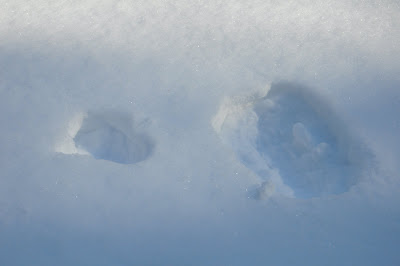 This is how one learns to age tracks. You make a track and record how it looks. Check it again in an hour, note the changes, and make a fresh one next to the first. Come back in another hour and check both tracks. Note the differences and make a third track. Etc. Do this in the rain, in the wind, in the cold, in the heat. At night, in the morning dew...the possibilities are endless. I've never really had the patience to do this; someday, maybe.

Our first set of non-human tracks were found along the parking lot. Many participants thought they must be deer tracks. I was leaning towards Rover (we were at the parking lot, there was pee on the signposts, and we could see other visitors with their pooches heading out onto the trails). Vince dug through the snow to first determine how deep the snow was and what the snow layers were like. 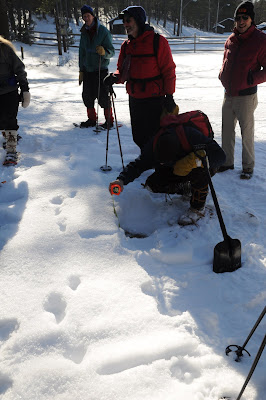 The snow was about 8" deep, with an icy layer about 2" down, formed when we had all that rain a couple weeks ago.

Next he dug out the snow around the track, to determine just how deep the track went. It only went as far as the icy layer. So, this animal wasn't too heavy (a deer, with it's greater weight and sharper hooves would've easily punched through this frozen layer). Using gentle movements, Vince felt in the track to see if he could feel any toe-prints. The final analysis: domestic dog. 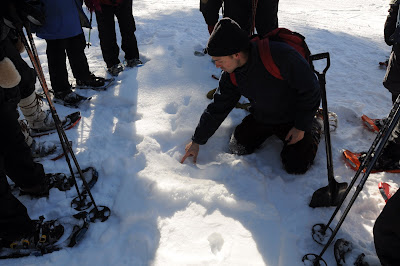 I was very surprised to come across this deceased honey bee on top of the snow. Why had it been flying about in the winter? Where was its hive? Is this a trait of the "colony collapse" honey bees are suffering - like bats with white-nose syndrome flying around outside their caves in the winter? 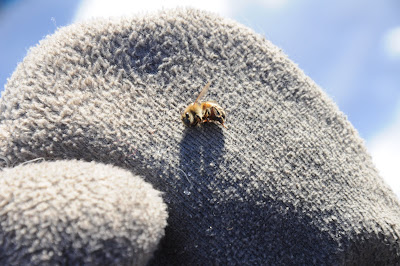 We found a set of mink tracks down by the bridge, where the pond drained into a small stream. Here Vince is pointing out the classic 2x2 footprints of the weasel family. 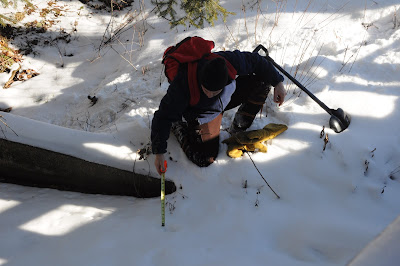 On the little overlook by the pond, the discussion probed techniques for aging the fox tracks that crossed the ice. The tracks were dusted on the inside with snow, so the animal had to have passed this way while it was still snowing. The consensus view was that it was snowing lightly between 4:00 and 7:30 the night before, so the animal must've crossed the pond sometime in the early evening. Because there wasn't a lot of snow in the tracks, the group decided it must've been there about 7:00 PM. 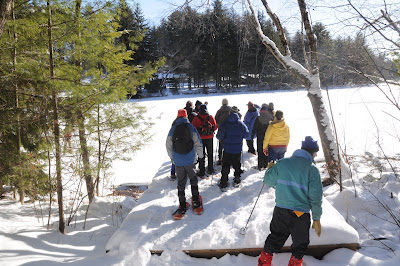 The following set of tracks confounded the group for quite some time. Several folks thought it was a porcupine trail, possibly influenced by the fisher tracks they had just been discussing. Whatever this animal was, it apparently had shortish legs, as evidence by the feet dragging through the snow as it climbed the hill. 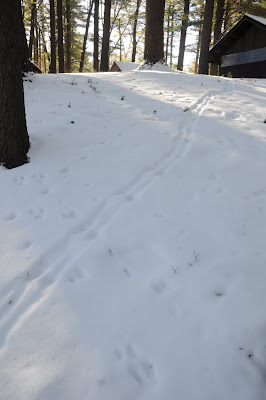 I was leaning more toward raccoon, mostly because I didn't see any of the classic tail-swishes in the trail (although the snow wasn't very deep, so perhaps the tail would've have dragged). There were also no quills to be found, and no yellow smear of urine. What I did see that made me think raccoon was a larger footprint next to a smaller footprint - classic 'coon tracks (hindfoot landing next to front foot as the animal walks along).
We followed the tracks as far as they went, which was the cabin you see at the top of the photo. Here they disappeared. Vince crawled under the cabin, determining that this would be a good place for an animal (like a raccoon, or a skunk) to hole up on a chilly day. Final conclusion: raccoon.
Fox tracks also went up the hill. We found a really nice scent post, which everyone was encouraged to sniff. It was musky and skunkish - red fox. 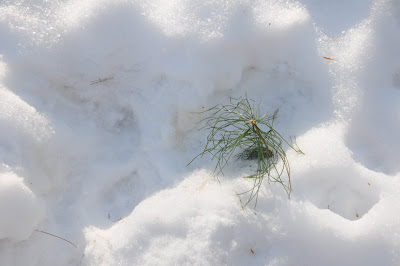 There were squirrel tracks a-plenty. Because these are old hat to me, I didn't take any pictures of them, but perhaps I should've done because there was a nice comparison of grey vs red squirrels. I did get a shot of a rather impressive midden pile the squirrels had made by a pile of logs. 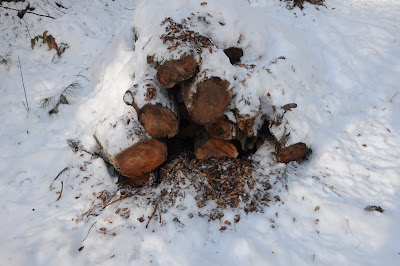 We found a beautiful set of fox tracks that told a great story. The fox was trotting along when it suddenly veered off to the right, stopping at the stems you see between Vince's legs here. I had seen these earlier, and my interpretation was that the fox smelled or heard something to the right that caught its attention. Just beyond this spot (behind Vince) was a cluster of white pine seedlings, and scattered across the snow all around them were mouse tracks. I figured the fox was checking out the hunting potential, and, determining it wasn't worthwhile, it returned to its original path and continued trotting southward (off the left side of the photo). 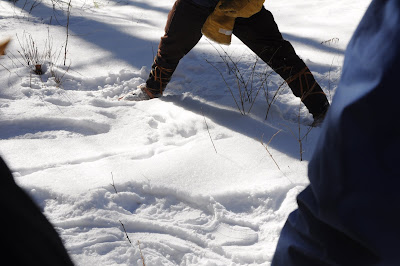 What Vince saw, however, was that the fox came along, suddenly veered to the right, and plunged its snout into the snow, using its highly sensitive whiskers to detect of there were any critters moving about under the snow that might make a nice snack. Not detecting any, it returned to its original mission and exited the scene.
The difference is that what Vince saw as a face plant in the snow I took as a footprint. The clue he saw was the distinct "V" shape made in the snow by the fox's lower jawbones (the print at the top of this photo). 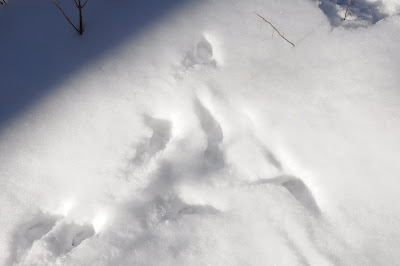 Here is the face plant close up. Note the upside-down "V". 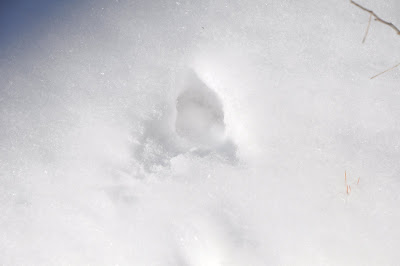 We continued following this fox. Trying to ascend a very steep slope reinforced for me the importance of using snowshoes that have teeth on the bottom ("Slip Slidin' Away" quickly became my theme song, for I was wearing my old wood and rawhide 'shoes). We followed our fox into a clearing where it went up on a small rise (a stump or rock buried under the snow) and left a scent post. 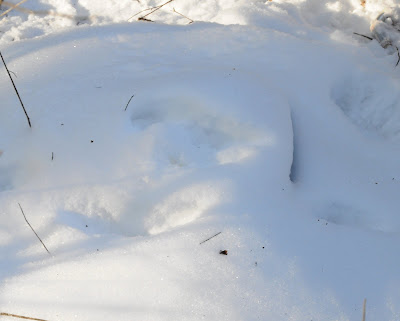 This scent post was most revealing, for now we knew we were following a female fox. How? It took some work, but we finally teased out all the clues. First, we know the fox was travelling towards the left of this picture. It stepped up on this object and squatted to make the scent post. Now, contrary to popular belief, male and females will both squat at times to pee, so the fact that the animal squatted wasn't the big clue. What was, though, was the position of the urine in relation to the feet: it is behind the feet. Had this been a male, the urine would've been squirted forward of the feet. (Isn't it amazing how simple these clues can be once you know what to look for?) For me, this and the face plant were the highlights of our tracking adventure. It was now headed for 3:00 and the sun was already getting low in the sky. The program had run overtime (as tracking programs will do), so the group began to disperse - places to go, things to do. It would've been fun to follow this fox further, to see what else she might do, but our time was up.

Vince will be doing another tracking program on 6 March at the Paul Smiths VIC. I know I will be there - "dirt time" with an expert tracker is always a good way to spend a day. The program requires pre-registration, so if you are in the area and would like to participate, give 'em a call: 518-327-3000.