One of our staff came in yesterday afternoon from a quick jaunt around the Rich Lake Trail to tell me I should go out and investigate the scene of a crime. "Piles of fur," she said. So, I grabbed radio, camera and snowshoes and went to check it out. 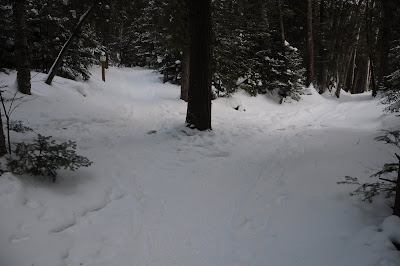 There were three locations with piles of hair, and lots of tracks all around. 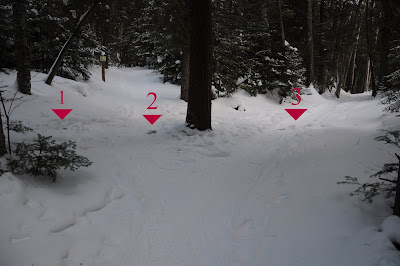 Fur/hair was scattered about at each of the three locations indicated above. 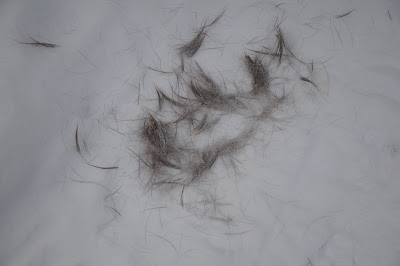 A close inspection of the fur/hair proved that it was indeed deer hair. Deer hair is very coarse, especially in winter. This is because the hairs of the winter coat are hollow, the air inside providing additional insulation. 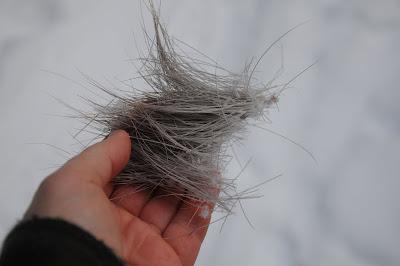 Looking closely at the ends of the hairs, I could see they were neatly severed, like someone had cut them off with a sharp knife. There were no tooth marks, or signs of shredding. 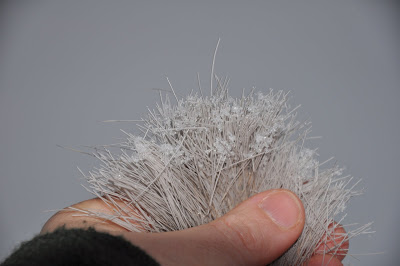 As you can see, the perpetrators were all over the place. There were no signs of blood, no signs of a struggle, no signs of dragging. All of this leads me to suspect that these animals were lugging along a portion of an already deceased deer. I wonder if it was part of the same deer whose skull the girls brought in a couple weeks ago. 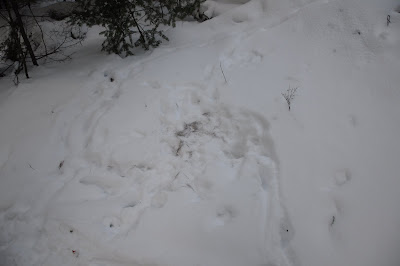 There were two spots where the animals left scent posts. I sniffed each, trying to ascertain whodunnit (I suspected coyotes). The pee was slightly musky with an overall sweet aroma. This was new to me. As I've mentioned before, red fox is skunky, so it was easy to eliminate that. I've never seen a grey fox on this property, and the tracks were simply too big for grey fox anyway. I've smelled what I thought was coyote urine before, but it was only musky, not sweet at all. I've sent an email to Vince to get his opinion - will keep you posted. 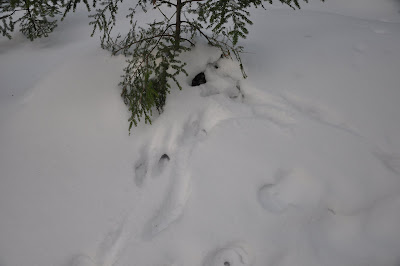 There were several sets of tracks coming across the ice of the bay. You could see where the coyotes had been walking in-line, and then split up. Because the sun was getting quite low in the sky (it was after 4:00), the light was getting dim. 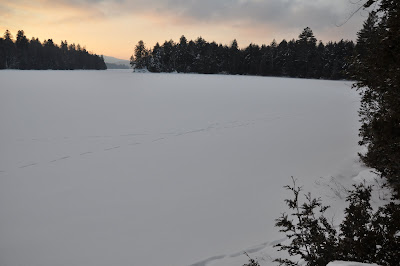 I love this one, for it seems the coyote stepped up on this snowy stump to take a look (or maybe a sniff) around. 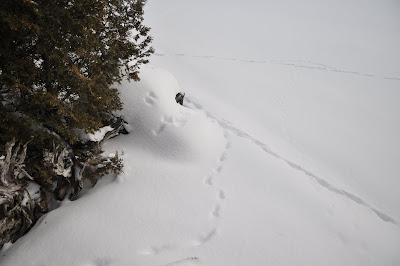 The coyotes came ashore here - their tracks were all over the place. 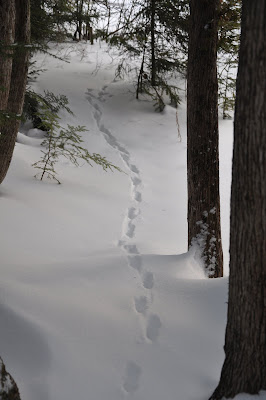 Here we see where a canid came along, gathered itself up, and leapt onto the boardwalk. I'm always amazed when they do this, for they must leap between the cables, which is a space of maybe 8". This leads me to think this animal was a fox, not a coyote. Plus, I know foxes routinely use this route, then head up the hill towards our birdfeeders - good mousing up there. 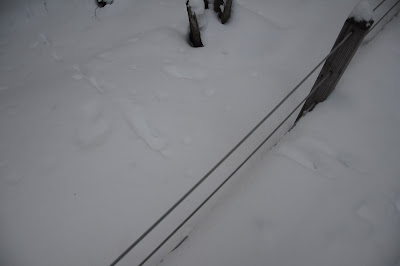 Because it was so mild, the snowfleas were out! I didn't see any actually hopping about, but apparently the migration was on. 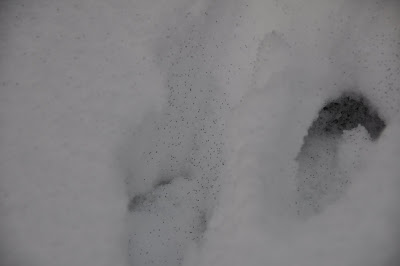 So, questions remain. In a perfect world, I'd scout the shoreline and look for the rest of this deer. But, I don't trust the ice on this lake. There are springs underneath and in some areas the water is always on the move, making ice crossings potentially dangerous. Perhaps more clues will show up as the season progresses.
Posted by Ellen Rathbone at 9:26 AM