How to Age a Deer

This morning I spent some time with Charlotte over at the Adirondack Ecological Center in a crash-course on deer aging. I took along the remains of the deer skull the girls brought in over the weekend (someone from my household discovered it when it fell out of the tree and decided to gnaw on it), but it turns out that in order to age a deer, one really needs the lower jaw, which exhibits all the measureable signs of wear and tear. What we could tell from the skull I have is simply that it is/was an adult.

Charlotte has a great PowerPoint program on deer aging, which we went through. She also has a box of deer jaws, which contains jaws from fawns to old geezers (at least seven years old). She gave me a couple hand-outs to add to my files for future reference. 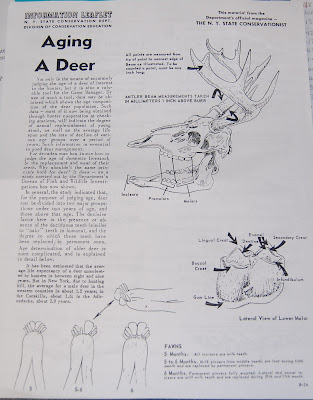 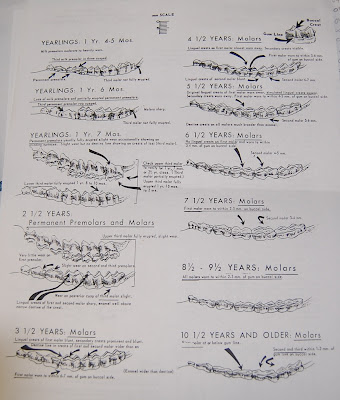 Here is the basic geography of a deer's tooth: 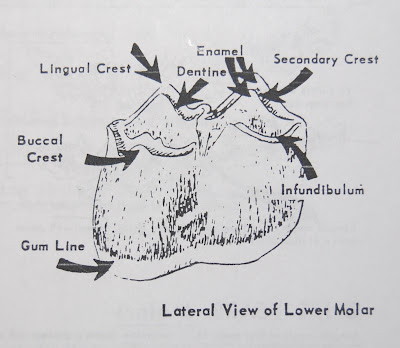 The tallest part of the tooth (the lingual crest) is the part closest to the tongue. This is white, the color of the tooth's enamel. Next comes a line of dentine (brown), which is the softer inner portion of the tooth. This is followed by the secondary crest, also white, and shorter than the lingual crest. So, what we have here is sort of a sandwiching effect: white, brown, white. This will become important in a bit.

The middle of the tooth, the low part, is the infundibulum. Finally, we end up with the buccal crest, the high part that is closest to the cheek.

When aging a deer, one first looks for any milk teeth - these are the little front teeth and first premolars. Just like any animal, these fall out and are replaced with adult teeth. If you have milk teeth, you have a fawn.

The key tooth to look at is the third pre-molar. On a young deer (up to a year-and-a-half old), this tooth has three cusps. When it is replaced, the new tooth only has two cusps.

Another thing to look for is how many molars have erupted (emerged). If only a few teeth have come in, it is a young deer. If the full complement is in place (six molars left and right, top and bottom), then it is a full adult.

Now we look at the amount of wear on the teeth.

If the cusps are all sharp and pointy, it is a young deer. As the teeth wear, the enamel begins to blunt (the sharp points become more rounded), and the inner dentine is exposed. This means that the brown band that is sandwiched between the white bands of the lingual and secondary crests becomes wider and wider. The more brown you see, the older the deer.

In this sketch, the cone represents the tooth. The white part is the enamel, the red part is the inner dentine. The dashed lines indicate wear. Each year more of the enamel wears down and more of the dentine is exposed. 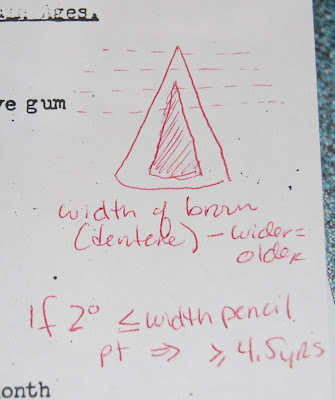 The cryptic note at the bottom translates thus: if the height of the secondary crest is less than or equal to the width of a pencil point, then the deer is at least 4.5 years old.

Over time, the cusps all wear down, resulting in what scientists call "cupping". The cusps eventually become the same level as the infundibulum, the lowest part of the tooth. In other words, the tooth is virtually flat. When you have a deer with flat teeth, you have an old deer.

I've tried to simplify this as much as possible, but without actual jawbones in hand to look at while going through the details above, it can be a challenge to know what is being talked about. If you are really interested in learning to age a deer by its teeth, I suggest you contact your area's conservation department and see if they have any hand-outs you can use. If you are lucky, you'll find a Charlotte who will gladly share with you her box of jawbones. If not, well, start your own collection, either from finds from the field, or gifts from any hunters you might know. It can be a fun puzzle to add to your naturalist's bag of tricks.
Posted by Ellen Rathbone at 11:50 AM