I Never Listen to Myself

I woke to a beautiful morning - the sun was rising, the sky was blue. I couldn't wait to walk the dog. While putting on my coat and getting Toby leashed up, I said to myself "take the camera - you'll regret it if you don't." And I answered myself "the last several times I've taken it, I haven't used it." So, I left it home. And of course, we found some great tracks. So, Toby got a very short walk, as I dashed back home, fed the dog, and headed off to work early, camera in hand to stop and photograph the tracks we encountered.

The first thing one might think when seeing these tracks is that a fox came along, gathered itself up and then jumped up on the snowbank. 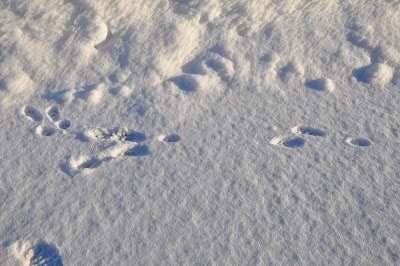 A closer look should give you pause, however. Are these really fox tracks? 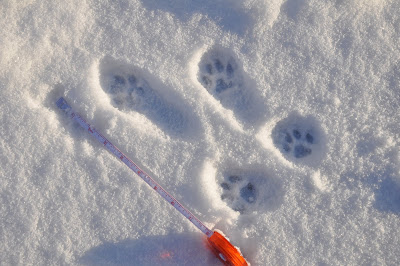 Consider: are there any claw marks? Is the overall shape of the track round or oval? Does the negative space between the toes and the footpad form an "X" or an "H", or is it more curved? The answers are no, round, and curved. This was a cat. We have had a bumper crop of feral cats this year, thanks to some neighbors, and many patrol the neighborhood. It's no surprise at all that Fluffy would be hunting up along this area, for it is now a field (of sorts) and no doubt great hunting for mice and voles. 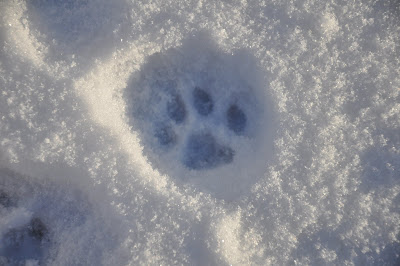 Oops! The deer came bounding over the snowbank and woo-hoo! There's ice under that snow and deer don't really have non-skid pads on their feet. 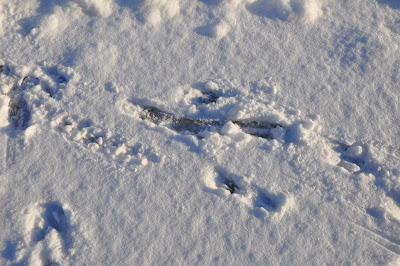 A nice straight line of nice neat footprints - could only be a wild canid (unless it was a deer, and there's no way these are deer tracks). The feet were small, so it must be a fox. 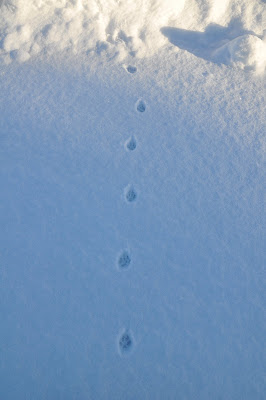 Looking closely at the footprints in this trail, you can see claw marks, which gives us a clue that this is not a cat. 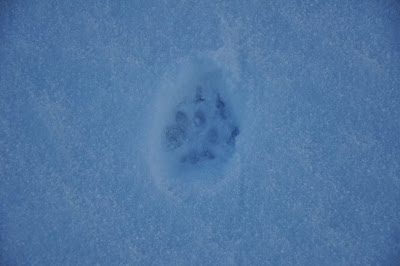 This next set of photos (three) are of a great set of tracks, which I'm not 100% sure I've deciphered. Here's my story: a grey fox came trotting along from the bottom left side of the photo. Then "something" happened, after which the fox lept forward, then turned and rapidly left the scene. 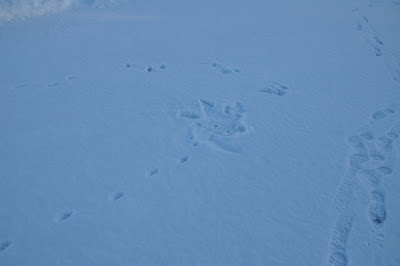 Looking closely at the "something," we see definite footprints, then what looks like feet skidding left and right on the ice. 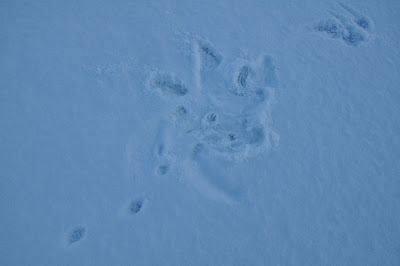 A real close look at the "something" shows that this fox left a couple drops of urine behind. Yes, I got down on my belly and took a sniff; I couldn't detect a thing (a clue that it wasn't a red fox); this combined with the fact that I've only ever seen grey foxes in this area, tells me that these are grey fox tracks. Like the fox tracks from Vince's class, the urine drops are placed behind the feet, which says that this was a female. Was she just marking her territory and then slipped on the ice? I saw nothing that suggested this was two foxes and that mating took place (besides, it is still a bit early for foxes to be breeding, although they may be forming up pairs now - there were certainly plenty of tracks in the area, so there could be a potential mate hanging around). 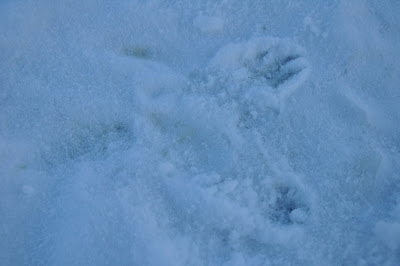 Oops! There's ice underneath that snow! 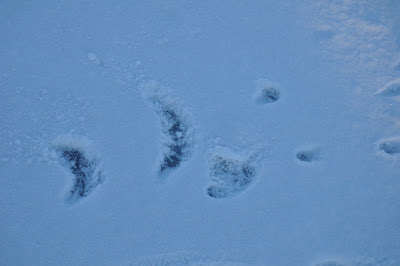 This next pair of photos show a couple important characteristics of grey fox tracks. With the front foot, the negative space between the toes and footpad forms an "H"... 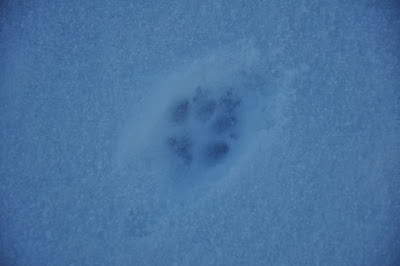 ...whereas on the hind foot, this same space forms an "X": 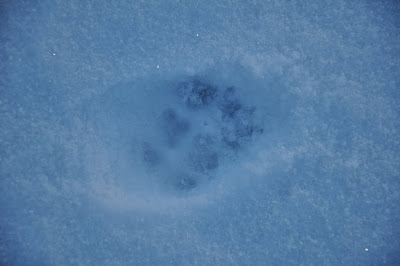 On red foxes and coyotes, both feet would show an "X" in this negative space.


Last weekend while leading a tracking walk on the VIC trails, I was asked where all the scat was. We rarely see scats on our trails, so when I do find some, I'm always very excited. When I saw a dark spot on the snow this morning, I was thrilled - it had to be a scat. Sure enough, there it was: a nice tidy scat pile, left by the fox. Full of hairs, the ends tapered and twisted - no doubt at all who left it. 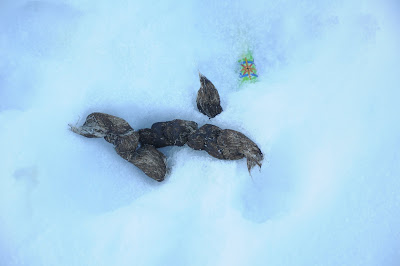 I loved this pair of tracks. We have a fox going left, and a cat going right. But, to the undiscerning eye, this is a strange animal that walks with extremely pronated feet. 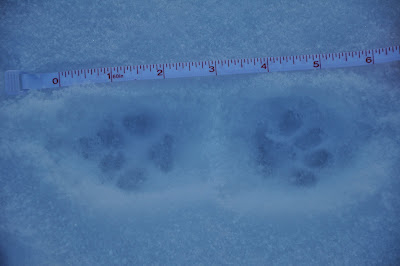