This morning was rather dark and dismal outside. It had tried to rain overnight, so there was a coating of ice on the car and the snow had a light crust. I was running late, so Toby got a short walk. For a change of pace, we detoured up to an abandoned property where kids ride dirt bikes in the summer and snowmobiles in the winter. I'm glad we did for I found this wonderful weasel trail, which included a slide: 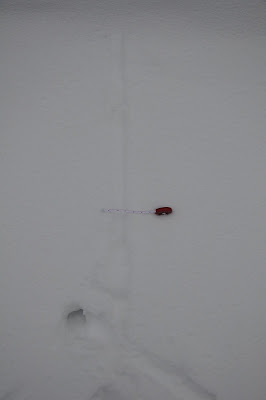 I came back afterwards with the camera because I don't have any weasel tracks in my photo collection yet. I suspect this is a long-tailed weasel because they are the most common. If we were in England, this would be a stoat (short-tailed weasels are also stoats, apparently; to them a "weasel" is the least weasel, which you'd have to go up to Canada to find here).

The slide measures about 2" across.

Here's a shot looking up the slope. You can see where the weasel came from the woods and apparently did a little investigating. 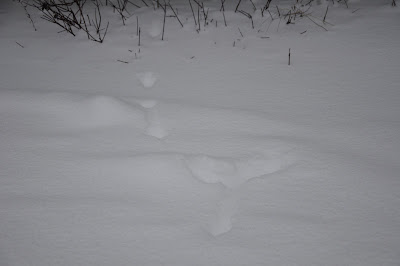 After it slid down the wee slope, it bounded across the road, leaving these 2x2 tracks behind, which are typical of the weasels. The tracks were filled with snow, so they weren't too fresh. This animal may have come by sometime in the early night (it snowed a bit after it rained), or the tracks could've been from the previous night. I'm leaning more towards that because of the amount of snow in the tracks. It snowed quite hard a couple times during the day yesterday, resulting in about a half inch of new snow, which looks about right in these tracks. 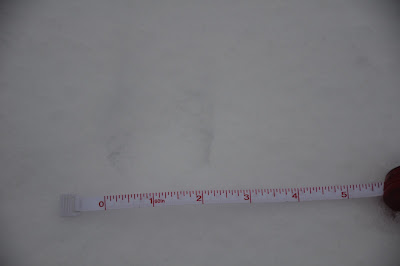 A fox had passed by last night, too. Because I've seen grey foxes here, I'm pretty sure this is a grey fox trail. The tracks to the right show the typical "C" or rotary gallop, curving to the left. The tracks on the left are mine. 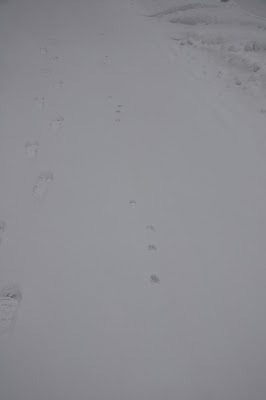 For comparison, here are my dog's tracks: 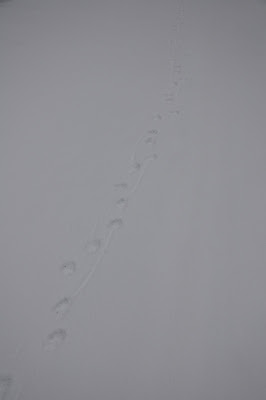 I can tell you he was pacing (a type of trot, where both the left feet move at the same time, then the right, then the left - like pacers at the race track) because that's his basic gait. Pacing is not a normal gait for most animals. Camels come by it naturally, and horses can be trained to do it. Looking at the tracks, though, you really can't tell this is what he's doing - you have to see the animal in action to note it. What you can see here, however, is each foot making its own track (no double registers here, where the hind foot lands where the front foot landed), and basically a sloppy pattern. Domestic dogs, for the most part, are not the efficient travellers their wild bretheren are.

So, here's a closer look at the fox's gallop: 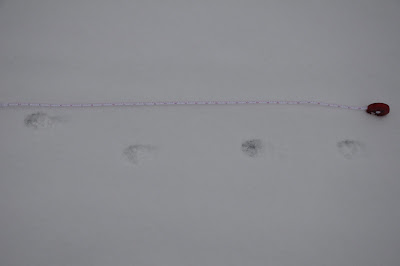 With canines, the front feet are larger than the back (they are supporting more weight than the hind feet). In the gallop the feet land front-front-hind-hind, both hind feet coming down in front of the front feet. This animal was travelling from right to left in this photo, so the left-most tracks are the hind feet.

I took a close-up of one of the front footprints because I wanted to verify the size for grey fox. When measuring tracks, you want to measure the impressions made by the foot pads at the bottom of the print, not the hole in the snow, which is bigger than the actual foot. This foot measures about 1 6/8" ; on average a grey fox front foot measures 1 3/8 - 1 7/8", so this falls within the range. 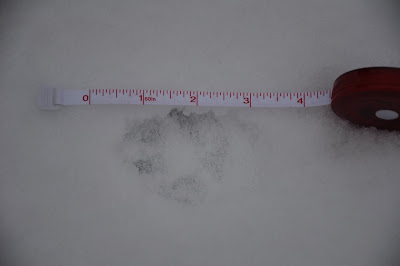 And, of course, there is always the ubiquitous deer trail. 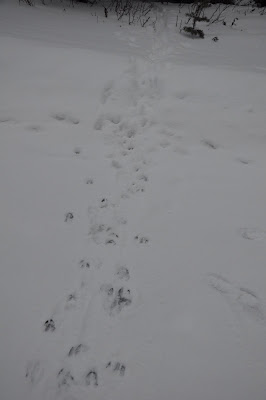