A Quick Cruise Through the Yard

I was determined to document the turkey evidence in my yard Sunday, but this particular bit of evidence was not one I expected to find: 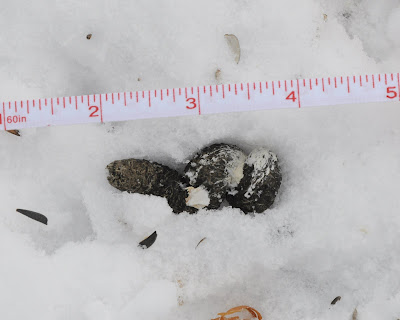 Of course, I shouldn't have been surprised. The turkey has visited the yard more than once, picking up scraps at the base of the feeders, so it is only logical that a deposit be made from the other end. In fact, I found three turkey scats as I made my rounds. 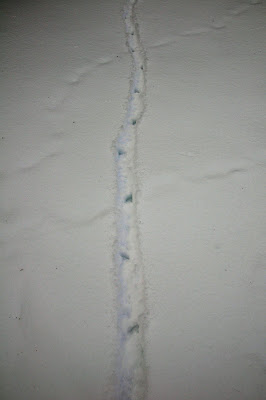 For some reason, my track photos just didn't come out - all they picked up was the blinding white of snow (and the sun wasn't even out). Still, a click on the old "quick fix" button and voila! the tracks were suddenly visible.
So, here we have the Trail of the Turkey. It's longish legs make for a pretty good stride length, but it does drag its feet.
I really wanted to see if I could find where the bird was entering (and exiting) the yard. Any track that had a dead-end was a pretty good candidate. 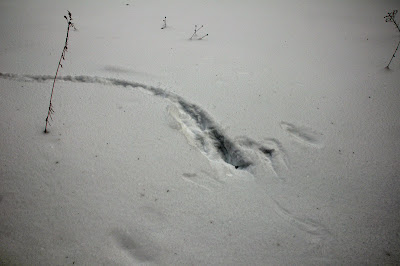 Now, had I been smart, I would've tromped over to this set of tracks to see which way they were going - the best way to determine if this bird was taking off or landing. But, I didn't do that (I wasn't wearing my snowshoes and didn't feel like floundering in the snow). Still, based on the scuffs across the snow, I'm guessing this is a landing site, where the wing feathers dragged across the surface as it "back peddled" to stop, and where, maybe, the tip of the tail hit.

Something got Toby all excited along the edge of the fence - see how his fur is all standing up along his shoulders and the base of his tail? He trotted back and forth, back and forth, barking and sniffing. What could it have been? And how long ago? Must've been fairly fresh for him to get this worked up about it. 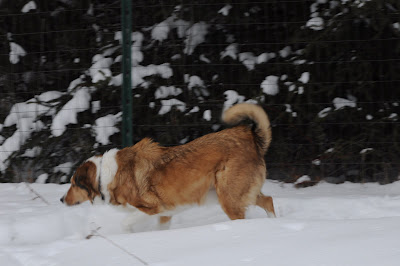 This giant sunflower head has remained untouched by the birds all fall and winter. I blame all the rain we had this fall - the seeds must've gotten all moldy. On the other hand, maybe they are empty. HM. A friend of mine showed me that her giant sunflower had totally empty seeds this fall. Sterile. I suggested it might've been the result of a hybrid seed and therefore wouldn't produce any fertile offspring of its own. Could that be what's happened here? The next time I'm out in the yard I'll have to pluck some of the seeds to find out. 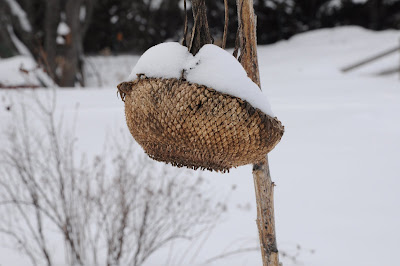 Another calling card, this time on top of a bluebird box. There were no tracks around the post, and no tracks on top of the box, but there was the scat nonetheless. Suspect? Red squirrel. 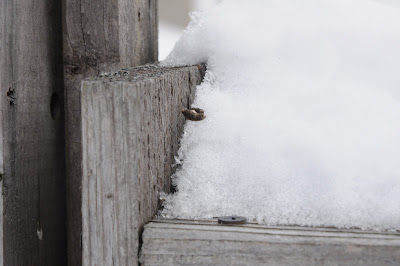 Posted by Ellen Rathbone at 1:40 PM